Interrobang’s THE AMISH PROJECT: An Icon of Forgiveness 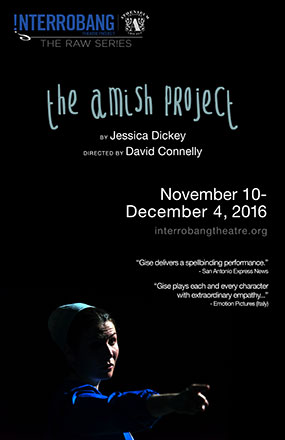 In his famous Law of the Drama, the French critic Ferdinand Brunitiere (1849-1906) insists on the primacy of  “conflict” in dramatic literature:

“Drama is a representation of the will of man in conflict with the mysterious powers or natural forces which limit and belittle us; it is one of us thrown living upon the stage there to struggle against fatality; against social law; against one of his mortals; against himself if need be; against the ambitions, the interests, the prejudices, the folly, the male-violence of those around him.”

How, then, can a drama about conflict’s opposite – forgiveness – hope to attain dramatic power?

This is the central question raised by Jessica Dickey’s intense play, The Amish Project, in Interrobang’s jewel-box-perfect production at the Athenaeum Theatre.

Based on the real life murder of five Amish school girls on October 2, 2006 in Nickel Mines, PA, Ms. Dickey’s drama centers on the extraordinary act of forgiveness extended to the murderer and his family by the victims’ families.

During the action we witness the effects of this forgiveness as it spreads throughout the community- to the pregnant 16-year-old Catholic Hispanic clerk, America, to the non-Amish resident, Sherry Local, finally, to the spirit of the murderer himself who haunts the widow. The press guide to the events is Bill North, a local college expert on the Amish, whose own life was mysteriously transformed thirty years ago by a personal encounter with divine forgiveness.

So, where is the conflict?

First, there is conflict as we witness the struggle between the natural human passion for revenge and the orthodox Christian response of loving forgiveness.

Orthodox Christians, like the Amish, seek through their actions to engage in the process of theosis, becoming Christ-like, or Godlike. By imitating the love of Christ, they might become the love of Christ: They live the words of St. Paul, “I have been crucified with Christ; it is no longer I who live, but Christ lives in me; and the life which I now live in the flesh I live by faith in the Son of God, who loved me and gave Himself for me.”[i]

They love and forgive as they are loved and forgiven by God. They forgive, not through their own human passions, which scream for revenge, but through the power of the in-dwelling Holy Spirit. No questions asked.

Second we see the surprising conflict between those forgiving and those being forgiven.

Carol, the murderer’s widow, is at first outraged at the Amish response.

“You know you show up here, try to make nice with the Sicko’s wife,

Now you see what I am. You can leave.

That poor girl at the store tried to help me and

I was such a fuckin’ bitch to her.

I wanted to rip my skin off.

I said YOU CAN GET OUT!”

Right then-he looks at me,

With his weird beard

And his blue eyes,

In the middle of his eyebrows, is a –

And he pushes that Word

With his blue stare.”

Jesus Christ is the “projection” of the Amish, of the serious orthodox Christian, of the love of God into a hurting and broken world. As Saint Gregory of Nazianzus notes,

He is called the Word, because He is related to the Father as word to mind. Perhaps, too, this relation might be compared to that between the definition of the thing defined since this is also called logos.”[ii]

That is what Carol sees. The Word, The Logos.

To have this man flower –

But it also helps.

Burned it with his face

That Word repeats itself

Finally, Carol sees her haunting husband Eddie’s spirit at the end of her driveway. But this time

And there it is –

I send that Word to Eddie.

I just stare at him and repeat it over and over,

Sort of beggin’ him, sort of reassurin’ him.

Until eventually, I see him fade.

See him fade into the night.

The Word has dispelled the darkness and begun to give Carol peace.

We, the audience, have also seen the Word and its transformative healing power.

The ultimately magisterial play concludes with the spirit of the youngest victim, Anna, who has been soaring about the world with insights rivaling Thornton Wilder’s Emily in Our Town.

Anna “looks intently at the audience,”

Can you see him?

Can you see Him?

Can you see Him?

The blessings emanating from the grace of God has revealed the truth of creation. Father Stephen Freeman explains:

The world and all that is in it is given to us as icon, not because it has no value but because the value it has is the gift of God – and this is seen in its iconicity. Another person can be my entry into Paradise, or just as clearly my entry into Hades (and both in a far deeper sense than merely moral). Love alone reveals things for what they are and transforms them into what they were always intended to be. Love alone reveals the true shape of the universe.”[iii]

At one point Bill, our guide to the events of the play, observes:

Something about them makes you wonder –

His ontological observation has a practical physical correlative in the playing of the drama:

All the characters are played by one actress!

From a fourteen-year-old Amish girl, to her six-year-old sister, to the widow Carol, to the professor, Bill North, to the Hispanic, America, to gunman Eddie Stuckey, and to Sherry Local – all by one actress.

We see the actress deliberately and carefully choose who to be moment by moment.

This production convention brilliantly conveys the message to the audience that we, too, can choose who we will be.

But only a brilliant actress in a magnificent production could avoid the pitfalls of such a sensitive play.

And that is what Interrobang has provided.

Sarah Gise is a remarkable performer. She fully embodies every character, so easily, yet so fluidly, that one even believes he can see the imaginary properties she casually and naturally employs. Through physical posture, attitude, psychological gesture, and vocal pitch, rhythm, and inflection, she contains and reveals, at will, a world, our world, within her.

Her performances radiate because added to the full panoply of convincing characters, including the impossible need to differentiate between six-year-old and fourteen-year-old Amish girls, Ms. Gise and her director have given the performance the aura of a memorial ceremony, an almost ritualistic retelling of a mythic saga. Her transitions seem almost “a sacrificial response”.[iv]

Ms. Gise is blessed to have the kind of director she has.

David Connelly[v], himself an outstanding actor, is of the first type. He knows what an actor needs to hear and what she doesn’t, knows what will trigger the creative juices of this particular actor, and what to avoid with this particular actor. Mr. Connelly is a trusted audience for all that Ms. Gise tries. He mobilizes all of the other aspects of the theater – setting, costume, lights (Emma Deane’s plot allows murderer Eddie Stuckey to have nothing but a black void for a face), and sound (Cole Wilson devised this moving score) to help the actress, and, by extension, help the audience enter into the almost holy world of Jessica Dickey’s play.

In 1883 a critic quoted playwright Alexandre Dumas in the Saturday Review:

“‘All I want,’ he said in a memorable comparison between himself and Victor Hugo, ‘is four trestles, four boards, two actors, and a passion’; and his good plays are a proof that in this he spoke no more than the truth.”

Interrobang’s production of Jessica Dickey’s The Amish Project testifies to the truth of that observation.

Of course, Mr. Dumas lacked Sarah Gise and David Connelly, so how good could it have been!

[v] A former student of mine

Like Loading...
November 13, 2016 – 5:52 pm | By Paul Kuritz | Posted in Art, Books, from Paul, History, Men and Women, Music, Quotations, The Gospel of the Kingdom, Theater, Theology | Comments Off on Interrobang’s THE AMISH PROJECT: An Icon of Forgiveness