CST’s King Charles III: The Tragedy of a Virtuous Man 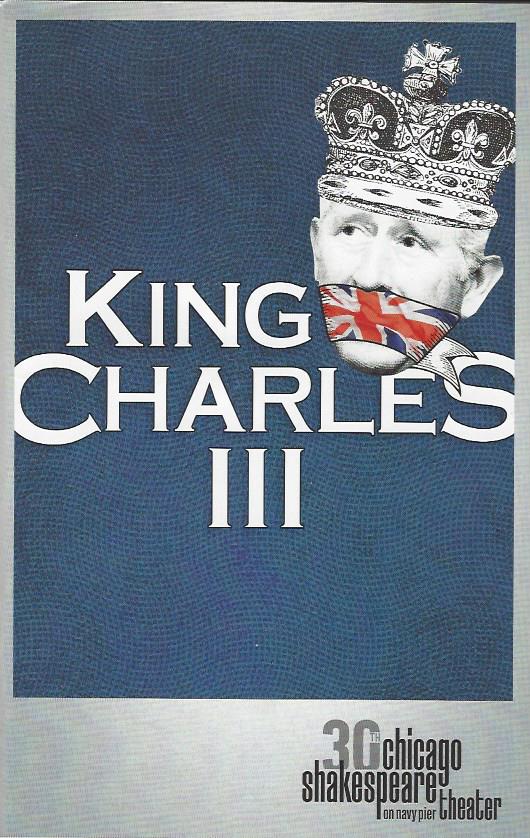 Mark Twain’s The Prince and the Pauper was my favorite novel as an elementary school student. I easily identified with young Tom Canty and saw the young Prince of Wales as my own contemporary Prince of Wales, Charles, whom I was fascinated to learn was but six weeks younger than I.

I have maintained my fascination with Charles, even as my attitude changed from envy and wonder to puzzlement and revulsion, to finally sadness as my contemporary prince morphed into a dilettante, a self-educated expert on just about everything – human rights, organic farming, climate change, homeopathy, architecture, historic preservation, urban planning, comparative religion and philosophy, history, polo, fishing, watercolors, and arts education, to mention the most prominent.

He even talked to his plants.

Like Beckett’s Vladimir and Estragon, he and his ancestor Edward VII were born to wait – Edward for sixty-one years, Charles for sixty-eight years and counting – before they could fulfill their destiny.

While Edward partied, Charles seemed to be preparing himself to be the best king he could be. He wanted to be “virtuous”, virtue being defined as the power to do the right thing in a given circumstance.

Thankfully, playwright Mike Bartlett brilliantly saw the possibility for genuine Shakespearean tragedy for the moment when Charles the Ready assumes the throne, the play King Charles III. Gary Griffin’s near-perfect production and Robert Bathurst’s overwhelmingly moving portrayal of Charles are not only a signal moments in my lifelong fascination with the Prince of Wales, the play in production is an important and historic piece of dramatic literature – a Shakespearean history play/tragedy using the contemporary monarchy as the plot material.

Bartlett’s Charles is clearly in the mold of the Shakespearean tragic hero.

Bartlett’s Charles has spent his entire life developing conspicuous virtues and abilities. He has distinguished himself through them in many spheres

But Charles discovers in a monumentally devastating peripeteia that his new circumstance of kingship forbids him to utilize any bit of his years of preparation.

In fact, to act at all would be to evoke a catastrophe.

Charles faces a decision similar to Hamlet’s – “to do or to be”, that’s the profound question the hero faces in this great play.

Charles wrestles, as all great tragic heroes must, with determining the “virtuous” course of action.

I always hoped as Crown I’d have some small

But crucial influence upon the State

I’d given all my working life to serve.”

If he can’t have than, then “what am I?” His very identity is at stake in the struggle and outcome.

“A monarchy reduced to smiling dolls.

The stars of Hollywood, we are dressed up,

And earn our cheque by roller-skating round.”

“For if my name is given through routine

And not because it represents my view

Then soon I’ll have no name, and nameless

Possess not mouth nor tongue nor brain, instead

I am an empty vessel, waiting for

I was a younger man, I’m Charles no more

The human being, but transformed into

Upon the table waiting for some man

To come and then inserting his own hand,

Do operate the image of the King

Pretending life, a simulation of

The outer skin with nothing in the heart.”

“Without my voice, and spirit, I am dust,

Like other of Shakespeare’s tragic heroes, Charles is not left in peace to sort it all out. The court has its own interests and opinions:

Too many years to call the crown his own.

And now he overestimates its worth,

And makes it ruler over King himself.

This bill, in case the precious crown shouts

The first to have a plan is Catherine, Duchess of Cornwall, William’s wife. To the world she appears innocent and uninterested in anything but the latest fascinator. In private she rivals Lady Macbeth in ambition and the ability to manipulate her husband.

You must go now and tell him what to do.

Because it’s not just him, or you, you risk,

By sitting here and doing nothing thus,

It is our children, and their children hence

And after that all generations royal

That are to come in future years, they all,

Do look to you insisting you defend

The Crown against this fool’s indulgence. “

“I say this not as future Queen but just

As British woman proud of both my State

And King, with understanding that it is

A balance in a contradiction

’Tween those elected and those born to rule

That is unique and does protect and make us all.

“She sat with me for hours at a time

And because I made a point to ask,

Did talk to me about what she had learned.

She told me that temptation lies as royal

To act, and speak, and lead, and always move,

When actually the greatest influence

That we can wield is through our standing still

Not rash, and never changing, a great

Crown Is made by dint of always being there,

Unlike you all, I’m born and raised to rule.

I do not choose, but like an Albion oak

I’m sown in British soil, and grown not for

Myself but reared with single purpose meant.

Whilst you have small constituency support

Which gusts and falls, as does the wind

My cells and organs constitute this land

Of now, of then, and all those still to come. “

Charles discovers he has, in fact, become one of the books he has spent years studying:

“I’m like a book myself, stuck on the shelf

For years, ignored and waiting, only judged

By one small sliver of the cover whole,

And sitting thus unopened and unused,

But if the moment comes to read the tome,

And it’s removed and rarely opened up

The words and thoughts inside are here

As fresh and potent as the day of print.

William plays the “family card”. He threatens to withhold from Charles the family he loves if Charles doesn’t agree to abdicate:

It’s not about a father and a son

But only what a king must do or not

It is the title I address today

And not my father who of course I love

Charles refuses to abdicate his role as father and grandfather:

When both of us are born and grown towards

A single purpose from our opening breath

To final gasp, our whole existence, all

Relationships and yes our family,

Is every atom crowned and every cell

Within our bodies built by monarchy.

William outlines his future course, so different from the one Charles has taken:

“I will as King return to what your mother did,

Stability and certainty, above

All else, a steady rudder through the waves.

Camilla urges Charles to hold to his principles:

The man I married will not bend, or break

Instead, as all the world throws rotten fruit

He will be firm and tie his life onto

The stake of principle. “

Charles must yield, choosing his beloved family over the long-awaited kingship:

I will retreat to bed, and when I wake

To a new dawn, I’ll simply be an old

Forgotten gardener, who potters round

And talks to plants and chuckles to himself.

Whilst far away the King and Queen do rule

Over a golden age of monarchy,

That bothers no one, does no good, and is

A pretty plastic picture with no meaning”

When the  irony of his life finally overwhelms him, Charles collapses into a sad pile on the steps of Westminster Abbey, having seen what Macbeth saw – his dream is but “nothing”.

As played by Robert Bathurst, Charles’ suffering brings him what Elder Olsen calls, “a transcendence of values”. [i] The actor is masterful in all he does, eschewing external trappings and tics to find instead the complex and contradictory inside of the character, Charles.

Bathurst’s Charles is one to cherish and one which evokes the tears of tragic pity.

It is a once in a life time occasion to see a new Shakespearean hero introduced to the world stage with such loving attention and poetic power.

All of the actors play the verse rhythms superbly. As Robert McKee notes, “The audience listens because in the theatre we want to hear first, see second.”[ii] Great credit must go to Mr. Bartlett, director Griffin, and dialect coach Eva Breneman, and verse coach Kathryn Walsh. Their work confirms Laurence Olivier’s anecdote about Michel St. Denis:

All of the production elements are first rate mixtures of Elizabethan convention and modern stagecraft. Scott Davis’ scenic designs, so exciting for Tug of War, and the Q Brothers work, here achieve an even greater level of economy and beauty. Mara Blumenfeld’s costumes are elegant in themselves, true to the historical figures, yet subtle in revealing small points of character psychology. The sound designs of Rob Milburn and Michael Bodeen magically create and move location quickly and dramatically, using the finest modern technology to create an important Shakespearean convention.

Shakespearean tragedy requires the finest of actors and that is what has been assembled for King Charles III. Robert Bathurst’s magnificence has already been noted. Amanda Drinkall ‘s Catherine, a far cry from her lovely Mary Page Marlowe, somehow manages to blend Sloan Squareness with Lady Macbeth’s cunning. Jordan Dean’s William and Alec Manley Wilson’s Harry fulfill the expectations the real-life characters have aroused while simultaneously bringing their own imaginative insights into the brothers’ complicated psychologies. Kate Skinner’s Camilla fully embodies the paramour-now-wife reality of the historical Camilla while adding a beauty and elegance lacking in the real thing. Sean Fortunato’s Prime Minister and David Lively’s Leader of the Opposition could not be better, making politicians interesting at a time when everyone is sick to death of them. Rae Gray’s Jess Edwards is compelling as she rides the rollercoaster of hopes in her on-again-off-again relationship with Harry. Demetrios Troy as Paul the kebab vendor speaks eloquently for the Tom Cantys of the world.

Gary Griffin is the ringmaster, magician, director, and midwife to this new and exceedingly exciting Shakespearean tragedy. His meticulous work clearly shows he knows what an important work is being offered to Chicago.

“If the actors will keep the meter, our nervous systems can register the continuing metrical pattern even while our more conscious attention is being directed to the action, the character, and the substance of their words and sentences.”[iv]

Gary Griffin and his stellar actors “keep the meter” and, as a result, draw the audience into Mike Bartlett’s wonderful King Charles III.

Like Loading...
November 11, 2016 – 2:14 pm | By Paul Kuritz | Posted in Current Events, from Paul, History, Men and Women, Poetry, Politics, Theater | Comments Off on CST’s King Charles III: The Tragedy of a Virtuous Man