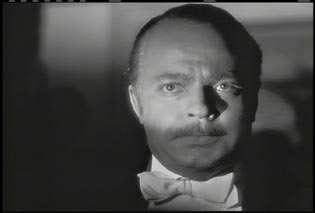 “Samuel Insull built the Civic Opera Building for his mistress, an opera singer.”

And these two tales are totally false. 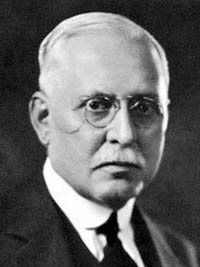 The only truth in the tales is that Samuel Insull built the Chicago Civic Opera House.

How, then, did such a scurrilous story develop?

Two Chicago screen writers, creating what would become one of the greatest films of all time, are to blame.

In February of 1940 Orson Welles and Herman Mankiewicz, both former Chicago residents, began to write a love story between a powerful publisher with political aspirations and a star-struck young girl.

Both Welles and Mankiewicz thought of William Randolph Hearst. In fact, Mankiewicz was even a personal friend of the publisher. Though Hearst would dominate their creative process, the writers wanted the main character to be a “composite”, drawing from the lives of several American entrepreneurs.

Their result would be Charles Foster Kane, and his girlfriend, Susan Alexander, a would-be opera singer.

As a young student at Wisconsin’s Todd School, Welles had met Chicago’s Harold F. McCormick, a major opera benefactor and chairman of International Harvester, and his then wife, the opera singer Ganna Walska. McCormick had left his first wife, heiress Edith Rockefeller, to help advance both the Polish soprano’s career and his own amour. McCormick had financed a production of Zaza starring Walska before the diva stormed out of rehearsals, never to return.

McCormick and Walska would figure into the creation of Citizen Kane, as well as Eastman Kodak chairman Jules Brulatour and his second and third wives, each of whose would-be opera careers he funded.

On the other hand, Chicago’s Samuel Insull was anything but a lady’s man. The chairman of both Commonwealth Edison and the Chicago Civic Opera Company seems to have married the first woman who gave him the time of day. Gladys Wallis, an actress, was playing in Chicago in The Squire of Dames with John Drew and Maude Adams, and a young Ethel Barrymore. Captivated by the young actress, Insull became a persistent stage-door Johnny.

So successful was Insull’s wooing, that Wallis turned down the chance to lead her own New York stock company to marry him for a life in Chicago. However, by 1926, Mrs. Insull was getting bored with her life as mother to a twenty-five-year-old son and residence in a $125,000 Italian villa near Libertyville. She told her husband she wanted to return to the stage.

Mrs. Insull had faithfully kept her promise to stay off the stage. Her only appearances had been in 1905 in an amateur production of Edmond Rostand’s Les Romanesques in Winnetka and in 1908 when she gave a reading of Maeterlinck’s Pelleas and Melisande to the Friday Club.

Mrs. Insull announced that she wanted to play Lady Teazle, a lively, innocent young maid, in Sheridan’s Restoration comedy The School for Scandal. Insull consented to her desire, hoping a stage success might restore some of the affection which had disappeared from their marriage. He suggested that she appear first in a series of charity performances for St. Luke’s Hospital. Insull himself guaranteed $125,000 from a two week run at the Illinois Theater.

The production opened with boxes selling for $500 and $1000 and no seat for less than $5.00 In two weeks the play netted the hospital $140,000. Frederick Donaghey of the Chicago Tribune couched his comments: “The acting here is as ‘professional’ as acting in The School for Scandal well may be.”

Mrs. Insull now intended to take her show to Broadway. In New York, drama critic George S. Kaufman sent his fellow critic, Herman Mankiewicz, to review her performance on October 22, 1925. “Full of fury and full of drink”, Mankiewicz set about to crucify both Mrs. Wallis’ performance – “an aging, hopelessly incompetent amateur” – and Samuel Insull’s arrogance in financing the vanity production.

However, Mankiewicz passed out on his typewriter midway through writing a blistering critique. Kaufman found him and the review was never published.

But Herman Mankiewicz remembered the incident and used it as he created the following scenes in Citizen Kane:

The camera is just inside the curtain, angling upstage.  We see the set for “Thais”

– the principals in place – stage managers, stage hands, etc., and in the center of

all this, in an elaborate costume, looking very small and very lost, is Susan.  She

is almost hysterical with fright.  Maids, singing teacher, and the rest are in

attendance.  Her throat is sprayed.  Applause is heard at the opening of the shot,

and now the orchestra starts thunderously.  The curtain starts to rise – the camera

with it – the blinding glare of the foots moves up Susan’s body and hits her face.

She squints and starts to sing.  Camera continues on up with the curtain, up past

Susan, up the full height of the proscenium arch and then on up into the gridiron

but faintly.  The camera stops at the top of the gridiron as the curtain stops.  Two

typical stage hands fill the frame.  They are looking down on the stage below.  Some

of the reflected light gleams on their faces.  They look at each other.  One of them

puts his hand to his nose.

Leland, as in the same scene in the Bernstein sequence, is sprawled across his

typewriter, his head on the keys.  The paper is gone from the roller.  Leland stirs

and looks up drunkenly, his eyes encountering Bernstein, who stands beside him (also

as in the previous scene).

Leland makes a terrific effort to pull himself together.  He straightens and reaches

for the keys – then sees the paper is gone from the machine.

Where is it – where’s my notice?

I’ve got to finish it!

Mr. Kane is finishing it.

During all this, the sound of a typewriter has been heard off – a busy typewriter.

Leland’s eyes follow the sound.  Slowly he registers Kane in the City Room beyond.

This is almost the same shot as in the previous Bernstein story.

Kane, in white tie and shirt sleeves, is typing away at a machine, his fingers

working briskly and efficiently, his face, seen by the desk light before him, set in

Leland stands in the door of his office, staring across at him.

I suppose he’s fixing it up – I

know I’d never get that through.

(moving to his side)

Mr. Kane is finishing your piece

the way you started it.

(then suddenly – with a

rather than a triumph)

– I guess that’ll show you.

Leland picks his way across the City Room to Kane’s side.  Kane goes on typing,

without looking up.  After a pause, Kane speaks.

I didn’t know we were speaking.

He starts typing again, the expression on his face doesn’t change.

In the film, Susan Alexander, Kane’s mistress, is an opera singer, like Ganna Walska, performing in a production financed by her husband, as was Gladys Wallis. The reviewer, Jed Leland, writes a damning critique of Kane’s mistress, as Herman Mankiewicz did of Mrs. Insull. Leland, like Mankiewicz, passes out before completing the review.

However, despite their best efforts to disguise William Randolph Hearst in their portrait of Charles Foster Kane, the public was not fooled. Welles and Mankiewicz were lambasted by the Hearst newspapers.

The “composite” character created in Citizen Kane has had an unfortunate effect on Samuel Insull’s legacy. The fictional behavior of Charles Foster Kane has somehow become part of the legend of Samuel Insull and the building of the Civic Opera House.

Mary Garden was the secret lover of industrialist, Ogden Armour, not of Samuel Insull. She finished her year as artistic “directra” out of favor with opera chairman Samuel Insull. The businessman could not stomach her loss of $1,000,000.00 during her one-year reign. In return, Garden said, “Insull killed opera in Chicago.”

The idea that these two strong personalities could be lovers is preposterous.

Insull’s motivation for building a new opera house was to provide a state-of-the-art facility, allowing for the ideas promulgated by the Swiss theorist/designer Adolph Appia in “Scenery and Lighting” and “Staging Wagnerian Opera.” The new opera house would provide what the Auditorium Theater didn’t – rehearsal space, dressing rooms, and storage areas, all in a “democratic” space.

Mary Garden hated the Civic Opera House acoustics and blamed Insull for denying her the intimacy she enjoyed with her box seat opera fans  at the Auditorium Theater.

William Randolph Hearst was not damaged by Citizen Kane.

The same cannot be said about Samuel Insull.

The faithful and devoted husband is daily slandered to visiting tourists. The man who worked his entire life to bring world-class opera to Chicago might well ask, along with former Labor Secretary Ray Donovan,

“Which office do I go to get my reputation back?”