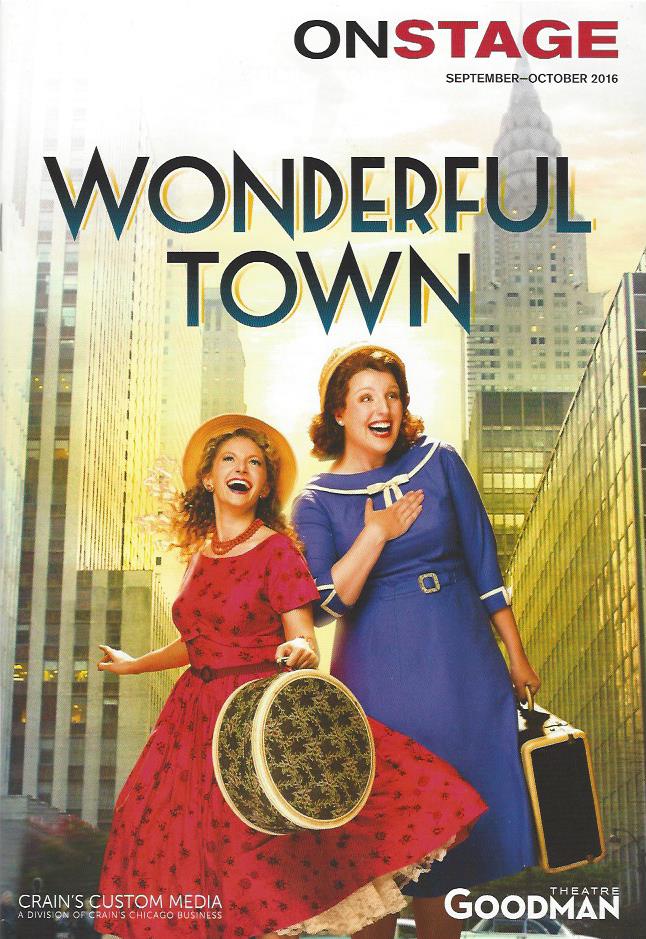 Occasionally a production arrives with such startling imagination, and with performances overflowing with such zest and talent, that a viewer is at a loss for words.

The production I am referring to is Mary Zimmerman’s Wonderful Town at the Goodman Theatre.

The 1950s musical is based on the post-World War II play My Sister Eileen by Joseph A. Fields and Jerome Chodorov. When the play arrived in Chicago at the Harris Theater in 1944, the Tribune’s Cecil Smith posted a headline that said it all:

When the musical version opened at Chicago’s Shubert in 1954, the Tribune’s inestimable Claudia Cassidy penned a headline still apropos of the current incarnation of the musical:

To Coin a Phrase, This “Wonderful Town” Is a Wonderful Show

An uncanny amount of the past reviews applies to the new Wonderful Town currently bringing cheering audiences to their feet on North Dearborn Street.

The setting by the great Donald Oenslager was deemed “noteworthy”. Todd Rosenthal’s settings are clearly more than noteworthy. Based on a graphic illustration by Steven Duncan, Mr. Rosenthal’s ever-moving urban time/space-machine is made a virtual character in the play’s action. In my opinion, the diversely creative settings of Mr. Rosenthal (Luna Gale, A Night Alive, Mary Page Marlowe, and Company) make his artistry at least the equal to that of Oenslager. 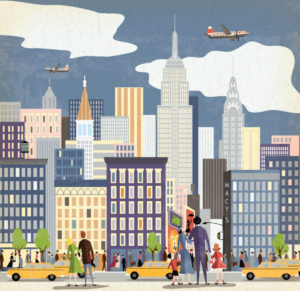 In 1944 Audrey Christie’s Ruth was considered “the finest individual performance.” Today Bri Sudia’s Ruth is a musical theater tour de force, in a show jam-packed with mighty  musical comedy forces. Ms. Sudia regularly stops the show, with such numbers as “A Hundred Easy Ways”, “Conga”, and “Swing”. Her entire performance is a master class in how to get an audience to eat out of one’s hand.

The casting of the musical is as perfect as you are likely to find. The play needs a believable pair for the sisters and Lauren Molina is the ideal sister for Ms. Sudia. She makes Eileen a real flesh and blood person rather than a Gil Elvgren pin-up. Their duet “Ohio” brings tears to the eyes of every Buckeye in the house. (And a few non-Buckeyes.)

Karl Hamilton as Robert Baker is, as was George Gaynes in 1954, “the only person the show can’t do without. I don’t know where you could hope to replace him, in charm, in easy good looks, in the voice that does so much for ‘Quiet Girl’.” His Act II epic rendition of “It’s Love” is a magnificent tribute to every average Joe bitten by the love bug.

Wreck, as played by Jordan Brown, is an endearing male bimbo. The actor has a wonderful ability to go all out in physicalizing his reactions. They are almost like American musical theater Kabuki katas. His girlfriend Helen (Kristin Villanueva) is as sweet as her mother, Mrs. Wade (Amy J. Carle0) is sour. Wade Elkins, Eileen’s suiter from Walgreen’s, could be Bill Irwin’s younger brother in humorous physicality. James Earl Jones II, so wonderful in Company as Harry, shows us another side of his impressive talent, as the smooth, slick jive Speedy Valenti.

The members of the Ensemble (Nathaniel Braga, Ariana Cappuccitti, Sharriese Y. Hamilton, Aaron Holland, Mark David Kaplan, Tiffany Krause, Kent M. Lewis (Chicago’s Johnny Cash), Russell Mernagh, Jeff Parker, Todd Rhoades, Jody Reynard, Lainie Sakakura, Ian Saunders, and Steven Strafford) could be, and are, stars in their own right. They create the city of New York with skill and beauty in Ana Kuzmanic’s jolly costumes and Charles Lapointe’s wigs. They are the backbone of this incredible production, the means by which director Zimmerman and choreographer Alex Sanchez weave their resplendent magic. Their “My Darlin’ Eileen”, replete with Riverdance, is a highlight in a show of non-stop highlights.

Mr. Sanchez’ choreography somehow manages to pay homage to the dance styles of the 1950s, while simultaneously creating new fresh forms. (“Swing’ itself may have the power to revive the cool jazz hipster moves of the Beat Generation.) Scenic transitions are not things to get through for Zimmerman and Sanchez; instead, they are occasions to further the plot and reveal more character, all to the delight of the audience.

Had you begun to wonder if you would ever see a good show again – a really first class musical fun from the start and endearing to boot, a handsome show with a rangy humor, a glittering score, and thorobred pacing of a handpicked, highly combustible cast? We got one.