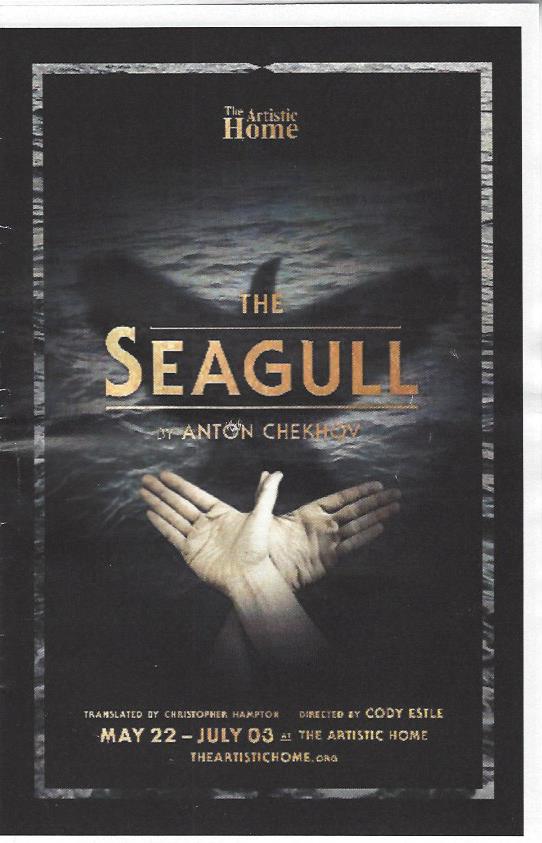 I will stake anything you like that these hidden dramas and tragedies in every character of the play, given a skillful, extremely conscientious production, without banalities, can enthrall the auditorium.

With those words the young Russian stage director Vladimir Nemirovich Danchenko, convinced the fledgling playwright Anton Chekhov to entrust his first play, after a disastrous first production, to a young theater company, The Moscow Art Theatre.

However, rare is the production of The Seagull which does not feel the need to help the playwright along with “banalities”. Recently post-modern additions by the Romanian duo of Liviu Ciulei and Andre Serban, updating by Andre Gregory and Wallace Shawn, and celebrity-packed productions by star directors like Mike Nichols have over-shadowed the genius of Anton Chekhov.

Consequently, Mr. Danchenko would roundly applaud the production of The Seagull offered by The Artistic Home.

Productions like this one, (although there is, unfortunately,  no production like this one), demonstrate why Chicago is the theater capital of America.

In a remote storefront theater, in West Town’s Noble Square, one accidentally finds the most stunning production of Chekhov imaginable.

Having seen countless live and filmed productions of all of Chekhov’s major and minor works, from the hands of the world’s finest theater artists, and having taught the plays for almost fifty years to theater students, I was not prepared to have those experiences dwarfed by the magic at 1376 West Grand Avenue.

Following the work of director Cody Estle and scene designer Jeffrey E. Kmiec, whose previous collaborative work was always splendid, as we enter the theater, we encounter a marvelously ingenious simple basketball court-shaped playing area, on which is found the skeleton of an old Russia farm out building, dried herbs still clinging to the corners of the weathered boards and traditional filigreed arches. Weathered benches and table soon arrive, as well. Within this poetic structure Chekhov’s four acts flow as gossamer curtains conceal and reveal on either end of the arena. Kmiec’s setting elegantly establishes time and place and mood, while providing a beautiful canvas for the work of his design collaborators.

In such close proximity to an audience every visual element has to be – and is – meticulously fabricated to perfection. Sarah Jo White’s period costumes define a character’s public nature while subtly hinting at other levels yet to be discovered. The costumes, too, are for the most part, muted in color and tint, and detailed in execution. Claire Sangster’s lighting precisely defines the small area, communicating time and mood with imaginative pale colors. For example, the down light in Act Four gives Nina a haggard look without recourse to stage make-up.

The challenging properties (dead seagull, stuffed seagull, worn manuscript pages, period lotto game, etc.) of Mary O’Dowd are all historically accurate and distressed to the point of seeming worn through use rather than artistry. All the design elements are simple, minimal, and designed to facilitate the most important elements of the production, the actors.

Cody Estele has a gift for directing actors in psychological realistic drama, and The Seagull may be the grandfather of the genre. In this production, Mr. Estle’s knack for finding the right property or stage business for an actor at just the right moment is on display. Like the Moscow Art Theatre, the Artistic Home also houses a school for acting based on the Meisner technique. Sanford Meisner, of all the Group Theater acting teachers, most fully understood and employed the methods eventually arrived at by the great Russian acting teacher, Konstantin Stanislavski, with Danchenko the co-founder of the Moscow Art Theater and the original Trigorin in their production of The Seagull.

While there is no way of knowing in what methods the cast of eleven actors were trained, one could assume the Meisner technique to be in the Artistic Home’s air, because key elements of Meisner’s method were clearly evident in the uniformly magnificent performances. For example, one of Meisner’s key maxim’s is that an actor need to wait for something to happen, preferably from outside of himself, before going on. It is a bold and daunting tenet, but when practiced it draws an audience into a performance like no other. The audience was on the edge of their seats, not for what was said or done, but in anticipation. Only the finest acting can do that.

The casting of the roles is perfect and the realization of the characters is masterful. So fresh are the performances that I often forgot that I knew the play like the back of my hand.

The Seagull is a realistic tragicomedy. Chekhov has, brilliantly, taken the rural comedy of Turgenev’s A Month in the Country, with its lovers, tension between generations, and conflicts between masters and servants and retrofitted it with the heart and soul of Shakespeare’s Hamlet.

Like Hamlet, young Constantin is without a father, and behaves peculiarly because of that lack. Like Hamlet, he becomes fixated on his mother, the provincial matinee idol Irina Arkadina, whose affections are now directed not toward her lost son, but toward the successful writer, Trigorin. Constantin makes many and vain attempts to win his mother’s love or, at least, her attention – including writing and staging a play, and attempting suicide.

If this were not enough, Constantin casts Nina, the neighbor girl he loves, in his play. Medvedenko, the school teacher loves Masha, the estate manager’s daughter, but she loves Constantin, who loves Nina, who loves Trigorin, who is loved by Irina, Constantin’s mother.

But these makings of a farce turn tragic.

The only character who gets the love he wants is Dr. Dorn, the country doctor, who seems to have had a liaison with every woman he has ever met. In fact, the production gently taps each reference which suggests that the members of the play’s central love triangle – Nina, Constantin, and Masha – could all be his illegitimate children, of course, unbeknownst to them!

Kathy Scambiaterra, not only managers the Artistic Home, but, in the great tradition of Eva LeGallienne, acts in the play. Her Irina is a wonderous provincial version of both Eleanora Duse and Adelina Patti, whose likenesses the designer seems to emulate. Ms. Scambiaterra can drop an easy brief put-down with the rapier grace of a young Maggie Smith. She is a force of nature, not to be crossed. Julian Hester plays her son Constantin with the life-or-death youthful seriousness which has always characterized young would-be artists. He regularly breaks our heart in a role which too often is incomprehensible or mad. Larry Baldacci plays Constantin’s uncle Pyotr, the too-familiar aging fellow who has nothing to speak of but regrets and no idea why his life has turned out as it has. Mr. Baldacci’s performance shows us this man’s sad, pathetic, yet endearing, heart as well.

Of all the roles in the classic repertory, Nina of The Seagull has more acting landmines than any other. The role of Nina, while looking easy, is in reality one of the theater’s most difficult.  Young actresses see only themselves in the role and think all they need do is reveal themselves. Nina, though young, requires an old head to understand the character. Brookelyn Hebert quickly revels her own old soul. When she begins to act in Constantin’s play her first few lines come out as of  the rankest amateur. But as the character, as played by Ms. Hebert, listens to what she is, in fact, saying, the character’s performance slowly takes on a power and poignancy. And at the end of the play, when Nina sees Constantin for the final time, she recites those lines, and we see and feel what life has taught her. Constantin and the audience are rightly moved to tears. To play Nina so superbly clearly identifies Ms. Hebert as an actress to watch.

Kevin Gladish’s Shamrayev, the estate manager, and Barbara Figgins as his love-hungry wife bring fresh insights to a couple usually forgotten in production. Their effectiveness testifies to the thoroughness with which the entire production has been thought-through and executed.

Laura Lapidus’ Masha somehow makes the character’s cruelty understandable and communicates a level of humanity which makes Medvedenko’s decision to stick with her understandable. That is quite an accomplishment. Kaiser Ahmed’s Medvedenko eschews the usual portrayal of the character as a fool, in favor of a Medvedenko as suave, stylish, and erudite young scholar. The portrayal is a revelation and works magnificently in the context of the play.

Scot West’s Trigorin is not a Don Juan. He seems to inadvertently  win the hearts of women with his ability to open his own  heart and life to those around him. In his scene with Nina, Mr. West simply looks her in the eyes and bares his soul honestly and painfully. We see Ms. Hebert’s Nina love his honesty and courage. With his slicked-back hair and goatee he seems modeled on the image of Constantin Stanislavski in the role. He is a Trigorin one will never forget.

Brian McKnight finds many levels in the humble country Doctor Dorn. McKnight’s undercover ladies’ man is the wisest person in the play, yet he doesn’t need to flaunt it. McKnight’s Dorn encourages the young people. He loves Constantin and is the most socially adapted and sensitive man in the play.

In a just world The Artistic Home’s The Seagull would be sold out every night, demanding Hamilton-like prices for tickets, and extending its run at least through the summer.

After experiencing The Seagull at The Artistic Home, the words of Pytor Ilyich Tchaikovsky after seeing the Moscow Art Theatre production of his friend Chekhov’s play seem appropriate:

It is many years since the stage last gave me such pleasure.