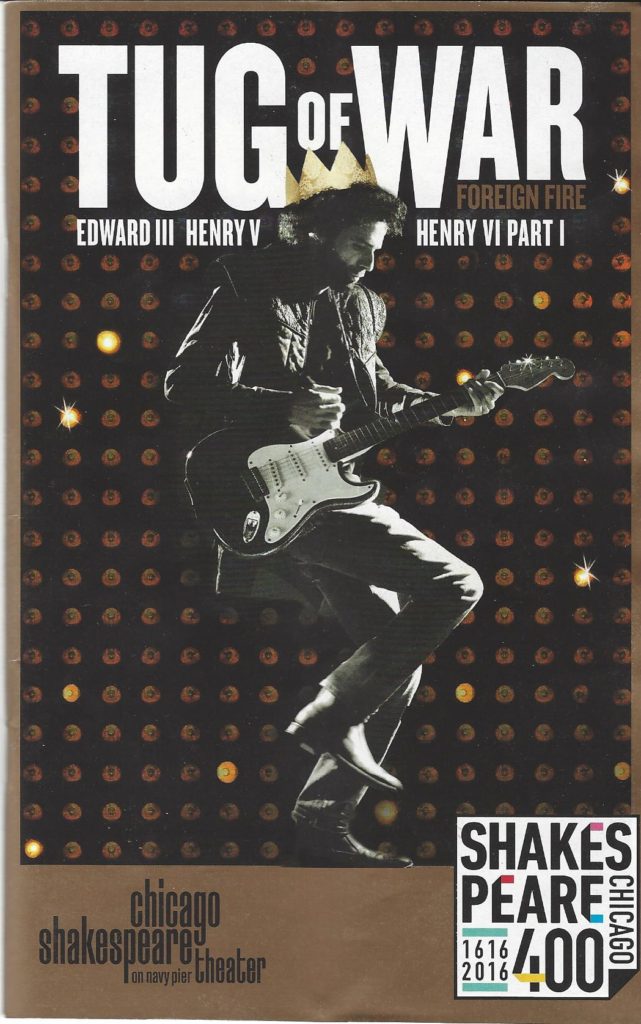 “Man is a predator whose natural instinct is to kill with a weapon.”

So wrote Chicago playwright and anthropologist Robert Ardrey after years of observing human nature in action all over the world.

“History, then, is open-ended and indeterminate as to genre in terms of tragedy and comedy. The history play is a thing unto itself, defined not by formal struc­ture but by content, by the story. It is a play that deals with English history. We have no way of supposing that Shakespeare theorized it as a genre. He simply dis­covered that he loved to write plays about English his­tory leading up to the very time when he lived, and discovered that English audiences were enthralled with this picture of themselves as a people, as a nation. The English history play thus became its own excuse, its own raison d’etre. We can be happy that Shakespeare made this choice.” [i]

Bevington’s approach dovetails nicely with Northrop Frye’s insight as to the purpose of the history play for an English audience:

“The central theme of Elizabethan history is the unifying of the nation and the binding of the audience into the myth as the inheritor of that unity, set over against the disasters of civil war and weak leadership.”[ii]

Tying everything together is Lindsay Jones’ exquisite sound design, original music, and musical arrangements. Under his sure guidance, rock instruments and cello somehow connect the past with the present in thrilling and moving ways. A character is as likely to break into a beautiful original song as into a Shakespearean monologue. It seems that if Mr. Jones is part of a production team one will always find something to enjoy in the theater.

Barbara Gaines moves actors around her Navy Pier stage like no other director I’ve seen. Her directorial style seems stage cinematic: beautiful and stunning stage pictures dissolve into new compositions via a remarkably wide range of groupings, routes, and tempos. And the actors in her productions of Shakespeare always seem to understand what they are saying, and say their lines with clarity, appropriateness, and ease.

And what a collection of actors have been assembled for this epic journey!

Each actor must play several different roles over the course of six hours. The transformations are helped immeasurably by the wonderful wigs and make-up designed by Melissa Veal.  Freddie Stevenson makes a powerful debut at the Chicago Shakespeare Theater with a complex, but clear, King Edward III (a role with a meager stage history), The Duke of Orleance, and a weak, but engaging, King Charles VII. Likewise, John Tufts makes his Chicago debut with a very strong Henry V, after assaying the sly Duke of Lorraine. His Henry V is a Fred Hoibeg-like leader, confusing collegiate enthusiasm for mature wisdom, a man out of his league, but trying his best. War educates his Henry and we get to watch his maturation. By the time Tufts comes to woo Princess Katherine, his king, played insightfully, is content with who he is, and bases his appeal to Katherine on his unpretentious charm. Later he plays the Duke of Suffolk with intriguing shrewdness. Steven Sutcliffe reveals a host of soft-edge characters, each totally, and wonderfully, sad and humorous in his own way – Lodowick in Edward III, the dauphin in Henry V, and King Henry VI in King Henry Vi, Part I. Michael Aaron Lindner plays the Earl of Warwick and Humphrey with gusto, and tops off his work with a magnetic portrayal of Fluellen in Henry V. Karen Aldridge gives each of her sultry roles  – the Countess of Salisbury, Alice, and Margaret of Anjou – a unique humanity and dignity. Heidi Kettenring commands the stage with each of her incarnations, from a very pregnant Queen Philippa, a feisty Captain Macmorris, a charming Princess Katherine, to a randy and demonic Joan la Pucelle, as the English saw her. Barbara Robertson exits too fast as the King of Bohemia, but returns with great power as the Duke of Exeter. Larry Yando seems to always be onstage or about to enter, as Lord Audley, King Charles VI, John Bates, the Chorus, and Richard Plantagenet, Duke of York. Anyone who has seen Mr. Yando before need only imagine what magic he brings to such a cavalcade of roles. Besides Mr. Yando, the Chorus of soloists comprised of John Tufts, Kevin Gudahl, Karen Aldridge, and Barbara Robertson make what could, in lesser hands, be a very difficult task, look both easy and enjoyable. The ensemble is strong from top to bottom. Dominique Worsley, Alex Weisman, James Newcomb, Daniel Kyri, David Darlow, Neil Friedman, and Kevin Gudahl take second place to none in their ability to enhance the production every time they are on stage.

“Do you know what I say to people when I hear they’re writing anti-war books? I say, ‘Why don’t you write an anti-glacier book instead?’”

Human nature may be hard-wired for war.

But humanity is also hard-wired to seek beauty, and that is what you will find in the magnificent Tug of War: Foreign Fire.