COMPANY at WRITERS THEATRE: Musical Theatre at Its Best 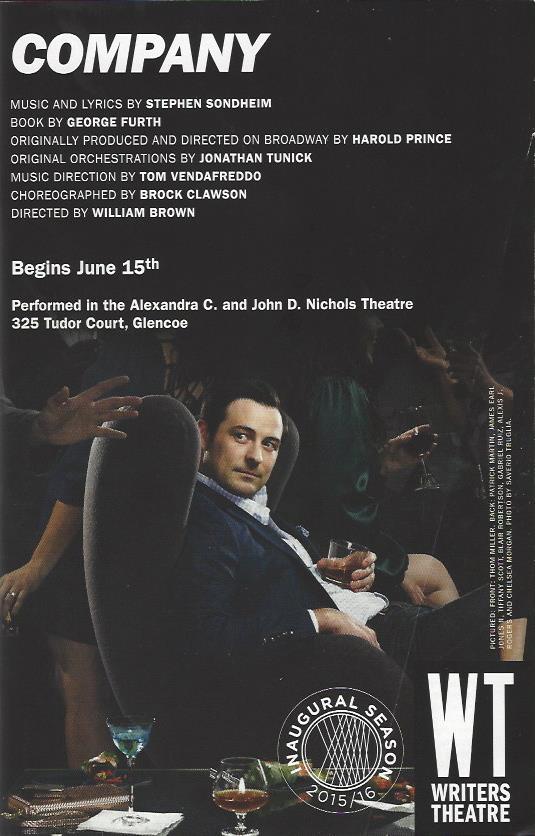 When God said, “It is not good for man to be alone,” He provided the stimulus for Stephen Sondheim’s landmark musical Company.

God made the human being as a social animal.

Without human interaction, newborns shrivel, and the elderly wither.

Meanwhile, those in between seek to avoid the deadliness of being alone.

Psychologist John Cacioppo of the University of Chicago has been tracking the effects of loneliness. He performed a series of novel studies and reported that loneliness works in some surprising ways to compromise health. Loneliness, Cacioppo concluded, sets in motion a variety of “slowly unfolding pathophysiological processes.” The net result is that the lonely experience higher levels of cumulative wear and tear.

Bobby. the hero of the musical, uses the occasion of his thirty-fifth birthday to review both his friends’ strategies for “being alive” in relationships and ponder his own inability to find his own help mate or soul mate.

What he discovers, is that loneliness, to one degree or another, can exist even in social relationships.

The dilemma for Bobby and, in fact, for all the characters in Company is summed up by the composer: “Company says very clearly that to be emotionally committed to somebody is very difficult, but to be alone is impossible.”

Most revivals of Company follow the conventions of the original production. The play is presented as Bobby’s non-linear stream-of-consciousness, a free-form dreamlike consideration of a cross-section of marriages. The outrageous 1970s period costumes often distract from the too confusing array of partially defined memories entering and exiting almost willy-nilly.

Not so William Brown’s brilliant production at the Writers Theatre.

First of all, Brown seems to eschew the notion of the play as non-linear. Instead, Brown presents many story lines involving clearly defined characters, all of whom converge on Bobby. Second, Mr. Brown seems to have worked on the given circumstances and back stories for each of the characters, not just Bobby. The various scenes arise out of “lives lived”rather than Bobby’s recollections. The songs are not random, but rather emerge from the distinct particular situations of the characters. Finally, the setting and costumes lose the distracting 70s look to affirm that the issues the play raises are as alive today as they were forty-six years ago. Being alive or alone is not a period dilemma, Rachel Anne Healy’s costumes make the characters our contemporaries, while suggesting circumstances in their lives not completely revealed in their dialogue or songs.

Todd Rosenthal’s stunning scenery summarizes the protagonist’s situation. The many perspectives on one’s need for company can create a distorted picture of the situation, as distorted as the surrealistic angled single-hung proscenium widow, or the bird’s eye view seen through it. Only the solid platforming and thrusting tongue-like floor give any grounding to the characters’ musings.

Jesse King’s lighting helps Mr. Brown move the action and focus of the play in clear and understandable ways, not always the case with this musical in production. However, like Sondheim’s musical, Mr. Rosenthal’s scenery reconciles all of the disparate views into a work of profound beauty.

Finally, the birthday cake provided by properties master Scott Dickens gives the play a new means of organizing the action to a satisfactory conclusion. Bobby just can’t blow the candles out until circumstances lead him to sing the glorious anthem “Being Alive”. Then the candles can go out when he blows on them.

The cast Mr. Brown has assembled is uniformly superb. These are actors who can sing. The acting could not be stronger because Sondheim doesn’t write songs, he writes theater music. So when these actors sing, the music always comes from a very clear place and for a very clear reason.

Sondheim wrote many of the roles and songs for the actors who would be playing them. You couldn’t guess that from the way this cast consumes the roles and reconceives them with remarkable results.

Harry (James Earl Jones II) and Sarah (Alexis J Rogers)’s karate matchup is but the tip of the iceberg to the complex relationship revealed by these gifted actors as they are serenaded by the ironic “The Little Things You Do Together”. Kathy (Chelsea Morgan), April (Jess Godwin), and Marta (Christine Mild), Bobby’s three current girlfriends encompass a wide range of types, each performed beautifully. Their “You Could Drive a Person Crazy’ has an Andrews Sisters zip in a contemporary idiom. Amy (Allison Hendrix) and Paul (Bernard Balbot) present yet another couple struggling with conflicting anxieties. Their scene is a show-stopper, culminating in Amy’s dazzling “Getting Married Today.”

Thom Miller carries the weight of the musical’s success or failure on his shoulders. Any actor playing Bobby has an audience constantly wondering, “why won’t this guy get married?” The genius of Miller’s performance is that we see him wresting with that question throughout the play. As a performer, Mr. Miller is a super-star leading man. His musical numbers, especially “Some One is Waiting”, “Marry me a Little”, “Side by Side by Side”, “Barcelona’ with Jess Godwin, and the climactic “Being Alive,” just couldn’t be performed any better by any one.

The rest of the cast is just as good – Patrick Martin as David, Blair Robertson as Jenny, Gabriel Ruiz as Peter, Tiffany Scott as Susan, and Patrick Sarb as Larry, the current husband of Joanne.

The role that was written for Elaine Stritch. Her song “The Ladies Who Lunch” became the actress’ signature song, as “There’s No Business Like Show Business’ became associated with Ethel Merman.

Lia Mortensen takes the role and before you know it you’re asking, “Elaine who?”  The role seems totally reborn and the song reconceived in the desperate circumstances Ms. Mortensen and Mr. Brown have set the song. It is a tour de force, alone worth the trip to Glencoe.

Ms. Mortensen’s performance caused me to think about Chicago’s theater. I believe I happen to have seen Ms. Mortensen in more productions than any other actress since moving to Chicago. In every role she is, of course, Lia Mortensen but in every role she is, at the same time, mysteriously, totally different. Likewise, Todd Rosenthal’s many settings have awed me in multiple Chicago venues for a wide range of plays.

So, it seems to me that Chicago is the theater capital of America because the entire city can be seen as one large company of actors, directors, designers, and theater spaces. We get to visit favorite spaces and we see our old favorites and meet new faces. This was the goal of the America’s little theater movement, regional theater movement, and repertory theater ambitions.

And Chicago has it like no other place I know.