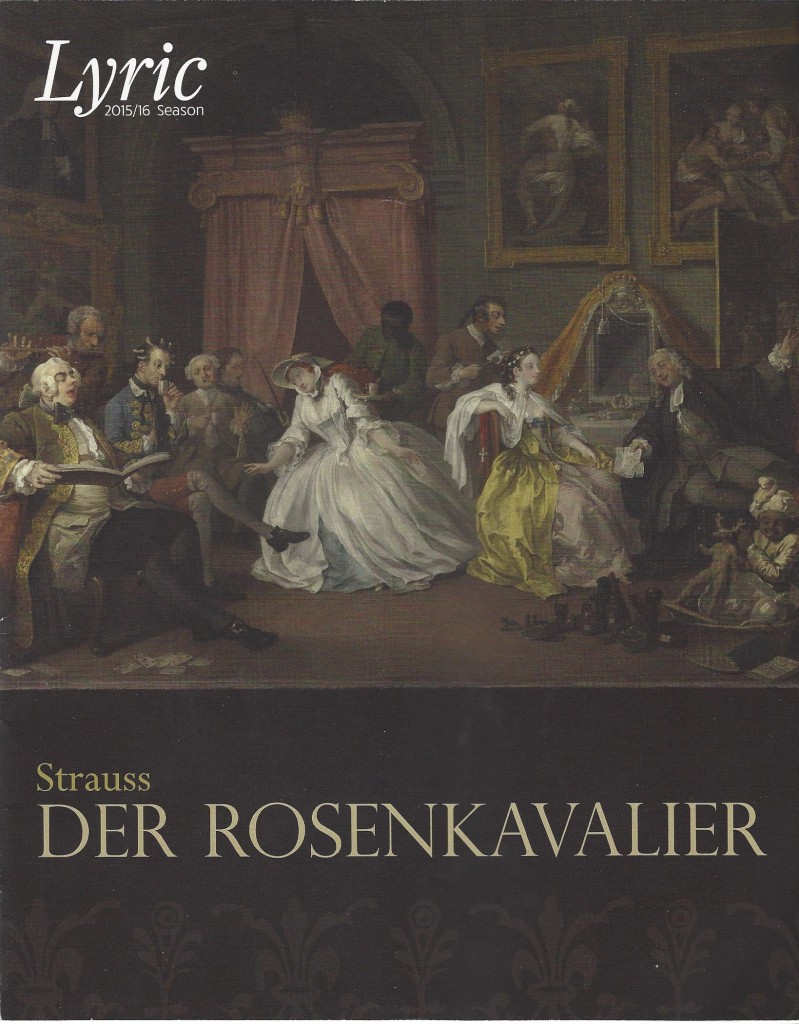 In April 1945, when the US army was requisitioning Richard Strauss’s villa in the Bavarian Alps, the frail 81-year-old composer emerged, blinking. Many years had passed during which the world had seen incredible changes, but the maestro’s soul was intact: “I am Richard Strauss, the composer of Der Rosenkavalier.”

Nostalgia informs the world out of which Der Rosenkavalier arises. Marie Theresa, the field marshal’s wife, and a pivotal figure in this great opera, represents a world for which time was running out. Strauss’ deepest desire was to Stop all the Clocks.

The conclusion of Act I reveals a melancholy Maria Theresa reflecting on the course of her life:

Did I not know a girl, just like to this one, who straight from out her convent was marched off into the Holy Estate of Wedlock? Where is she now! (Sighs.) Go seek the snows of yesteryear! But can it be—can it be—though I say it so, That I was that young Tess of long ago. And that I shall be called, ere long, “the old Princess,” “The old Field Marshal’s lady.” — “Look you “There goes the old Princess Theresa”— How can it come to pass? How can the Pow’rs decree it so? For I am I, and never change. (Gaily.) And if indeed it must be so, why then must I sit here, a looker on. And see it all and grieve? Were it not better we were blind? These things are still a mystery—a mystery— And we are here below to bear it all. (Sighs.) But how? but how? (Very quietly.) In that lies all the difference.

I feel I know That all things earthly are but vanity, but empty dreams— Deep in my heart I know how we grasp at naught. How we cling to naught. How the world’s joys cheat and elude us— How empty all things are what we deem precious, All things must pass, like mists—like dreams.

And time—how strangely does it go its ways— First we are heedless—Lo! ’tis as nothing! Then a sudden waking, and we feel naught else but it. All the world tells of it; all our souls are filled with it. No face but shows the mark of it. No mirror but shows it us— All my veins feel its throbbing. And there—’twixt you and me— It flows in silence. Trickling—like sands in the hour-glass— (Earnestly.) But sometimes I hear it flowing ceaselessly. (Softly.) Sometimes I arise at the dead of night and take the clocks and stop them ev’ry one— And yet—to be afraid of it—what boots it? For, mindful of its creatures all it so.

The other major female in the opera is seventeen-year-old Sophia von Faninal, like Theresa, a product of the convent. She is about to make the same mistake the Marschallin made: marrying out of duty rather than for love.

Like the young fresh-from-the convent “Tess”, Sophie knows that marriage is a God – ordained sacrament, and so she prepares herself for God’s great gift through confession and repentance:

In this most sacred hour, my God, O my Creator, when Thy great blessings lift me high above my worth, I thank Thee, that to the Holy Estate by Thy will I am led. (She controls herself with difficulty.) A contrite heart unto Thy Throne—Thy Throne—I bring. Oh! Grant that the sin of vainglory may ever be far from my soul.

Be far from my soul . . . From all temptations, Lord, preserve me of the pomps and vanities of this world here below, by Thy great mercy— My Mother, she is dead and all alone am I, for me there’s none to plead but I alone, but wedlock is in truth a holy estate.

Let me not be puffed up with pride unduly by the honors.

These two sopranos are connected by a third soprano, who plays the role of a seventeen-year-old boy, Octavian. (Stauss’ wife, Pauline de Ahna, was a soprano herself, so she no doubt encouraged him to write for as many sopranos as possible.)

Octavian is the bearer of the “sliver rose’. The silver rose traditionally is sent by a bridegroom to his bride. The role of rose bearer marks a major transition in the life of Octavian. As Maria Theresa’s paramour, Octavian identified with “the realm of darkness.” Now, coming to Sophie, the dream woman he has somehow forgotten, Octavian moves to the Light, becoming the agent of Sophie’s deliverance, “a holy angel might he be.”

While waiting for her Rosenkavalier, Sophie prays that God will make her a worthy bride:

Ye Saints in Heaven, I know that pride is a most deadly sin; But this day all my prayers are vain—I cannot Be duly meek—
Sophie discovers the groom she thought God had sent her to be a crude boor. After encountering her intended, Baron Ochs, , Sophie has the wisdom, and finds the courage, to resist the horrors of the arranged marriage.

Unlike Maria Theresa, the Baron Ochs , the boorish noble, sees time as a mundane extension of himself, rather than as the mysterious blessed creation of God:

Without me slowly will pass all the days

With me, with me time will seem short always!

Without me, without me, slowly pass all the days, with me, with me, time will seem short always.

By opera’s end, Maria Theresa resumes her role as middle-aged wife. Sophie and Octavian enjoy true love. And Ochs goes off to ponder his future.

Strauss said, after reading von Hoffmansthal’s libretto, “very good actors are needed; the usual opera singers won’t do.” The great German director Max Reinhardt, a pioneer in psychological character development, was engaged to privately coach the singers in the psychological development of Strauss’ characters. Hoffmansthal summarized the process: “Had Reinhardt not been here, the entire undertaking would have been in doubt. It is unbelievable how he helps!”

Amanda Majeski as Maria Theresa, the Marschallin, sings beautifully throughout the opera. Her conclusion of Act I was heart-breakingly lovely. In Act III, however, the Marschallin ‘s objective for coming to the inn is not clearly realized in specific interactions with the other characters. Her objective seems too general, and too unimportant, to energize her.

Sophie Koch’s Octavian succeeds most when playing a man disguised as the domestic, Mariandel. Unfortunately, she doesn’t seem smitten enough by Sophie when they meet in Act II. The magical odor of the silver rose seems neither to make Octavian lust enough to woo the chaste Sophie from her sacred wedding plans nor for him to lose interest in his Marchallin.

Christina Landshamer’s virginal Sophie van Faninal is the production’s revelation. The actress clearly shows the conflict in the young bride’s mind as the groom she prayed for turns out to be a nightmare. In addition, she must deal with the sinful urges she begins to feel, on her wedding day, for another man! Ms. Landshamer clearly shows the character’s discomfort and loss for words or guidance in what to do in such an unexpected and horrible situation.

The supporting characters are also strong. The Italian Singer of Rene Barbera, the conniving hustlers Valzacchi and Annina of Rodell Rosel and Megan Marino, Laura Wilde’s hysterical Marianne, and the ever-eager Mohammed of Zach Thomas sparkle in their cameo moments.

The orchestra is led masterfully by Edward Gardner as it reveals through lush sound the complex development of these conflicted characters.

For the original production, Alfred Roller was engaged to design the entire production and to create detailed blocking charts for all of the stage movements. (After the premiere the designs and stage charts were published by the composer’s publisher, Furstner, making them available to subsequent productions.)

This particular Rosenkavalier was premiered by the San Francisco Opera in 1993. Thierry Bosquet recreated the historic decors and costumes created for the original 1911 German production. Lofti Mansouri stage directed the action. In 2005 the San Francisco Opera’s production appeared at the Lyric Opera, recreated under the direction of Bruce Donnell.

This time out Martina Weber undertakes the restaging and the results are spectacular. Whether by employing the original stage charts, whether influenced by Otto Shank’s Rosenkavalier, or whether through her own creative imagination, the results are exciting to behold.

Strauss requested that Der Rosenkavalier’s sublime final trio, be played at his funeral in 1949, in still war-blasted Munich. As the soaring, overlapping lines arched out over the orchestra, each of the three singers broke down, overcome by emotion, the words, speaking of valediction and the hope of new life, were unbearably poignant in the circumstances.

This great comedy of love and loss, with an inexhaustible flow of heart-stopping melody, belongs, like the composer, to a vanished world, now wonderfully on view at the Civic Opera House.