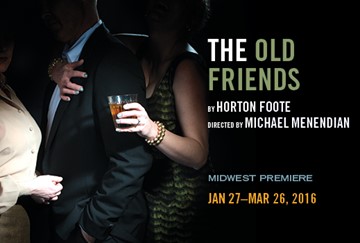 But who would think that a play from the gentle Horton Foote could uncork such fury!

Known as an American Chekhov, Foote’s plays chronicle the gradual decline of small town America, as next generations abandon low-keyed agricultural life for the up-tempo life of urban manufacturing cities. In the process, families and hearts are broken. The past upon which the present depends is abandoned and discarded.

Chicago’s Raven Theatre has distinguished itself by offering the Midwest premiers of Foote’s final important plays. Last season’s Dividing the Estate revealed the manipulation and deception of children vying greedily for their parent’s inheritance.

In Raven’s stunning current production of Foote’s The Old Friends, a play Foote worked on throughout his life, the familial estates have all been divided, and the winners and losers determined. What happens next is the subject of the play, as “old friends” release years’ of animosities, jealousies, and regrets, one upon another.

In 1965 Harrison, Texas, the Ratliff, Bordon, and Price families have come to the end of their genealogical lines. No family has any children. Gertrude Ratliff is a widow who, like her namesake in Hamlet, has romantic designs on her brother-in-law Howard. Howard has remained a bachelor ever since his high school sweetheart, Sybil, rebuffed him to marry Hugo Borden. Childless Sybil has just returned to Harrison penniless and husbandless. (Husband Hugo died getting off the arriving plane.)For some unknown and God-forsaken reason Hugo’s sister Julia married the monied Albert Price. Julia detests Albert, but loves the estate she has wheedled out of her mother, Mamie Borden. Both Julia and Gertrude crave both Howard and a man young enough to be their son, Tom Underwood.

With no next generation in sight, the home motto seems to be “eat, drink, and be merry, for tomorrow we die.”

The matriarch Mamie has been driven out of the family home and seeks to live a quiet life with her daughter-in-law, Sybil. Sybil may or may not be interested in rekindling a relationship with old flame Howard, who has forsaken all to be free for her.

Director Michael Menendian has assembled a wonderful group of actors and directed them into an ensemble whose selfless teamwork should make the Chicago Bulls blush. marssie Mencotti plays the matriarch Mamie Bordon, the representative of a long lost civility and the wounded heart of the family, as she did last year with her equally flawless performance of Stella Gordon in Dividing the Estate. (The results of her imbibing alcohol for the first time may be worth the price of admission itself.) As played by Judy Lea Steele, her daughter Julia must resemble her absent father, since there is not an honest trace of her mother’s humanity to be seen in her. Her ever-suffering husband Albert (Ron Quade), drinks in order to withstand her abuse until he finally snaps in a murderous rage. Andy Monson’s Tom Underwood ably represents the generation none of these barren families were able to produce. He is a young man on the move, willing to do whatever it takes to get what he wants.

Jo Ann Montemurro plays the ever – drinking, ever-lusting Gertrude, a role whose wickedness equals  both that of Iago and Richard III combined. This character is even a worse human being than the Mary Jo Gordon Ms. Montemurro played in Dividing the Estate last season. The accomplished actress even finds humor in the role to counterpoint the blood curdling chills she evokes in her audience.

Aneisa Hicks and Kayla Pulley play the underwritten domestics, Catherine and Hattie, with zest and integrity.

Besides Mamie, the two characters who seem untouched by the rampant evil around them are bachelor Howard Ratliff and  widow Sybil Borden. Making a nice and decent character interesting on stage is one of the most difficult tasks any actor can undertake. And Will Casey triumphs in the process; his goodness and kindness hold their own amid the vile characters surrounding him. Howard and Sybil undergo Dark Nights of the Soul, which Foote suggests may lead them to the beginnings of some kind of kenosis. By the end of the play, we are rooting for Howard to get together with Sybil. As Sybil, Lori Mayers has a very demanding role – her husband has just died, the man she wishes she had married turns up, and her old enemies attempt to strip her of everything, including her self-respect. The actress carries it all off with aplomb.

The Old Friends is a multi-set play. The great ability of designer Jeffrey D. Kmiec to accomplish this requirement in a theater with neither wings nor fly space is a miracle. The settings are lovely tributes to the late 1950s – an odd mixture of banality and garishness. The speedy and interesting set changes he, director Mendendian, and technical director Conor Clark devised, are so good that more equipped theaters could learn a lesson or two from the way this important work is accomplished.

Even sound designer Eric Backus’ incidental music evokes the bankrupt sophistication the “winners” in this world seek – “I’m In with the In Crowd” and “Watermelon Man,” among priceless others.

In his classic work The Four Loves *, C. S. Lewis discussed the form of love known as philia, or “friendship”:

In a circle of true Friends each man is simply what he is: stands for nothing but himself. No one cares twopence about anyone else’s family, profession, class, income, race, or previous history. Of course you will get to know about most of these in the end. But casually. They will come out bit by bit, to furnish an illustration or an analogy, to serve as pegs for an anecdote; never for their own sake. That is the kingliness of Friendship. We meet like sovereign princes of independent states, abroad, on neutral ground, freed from our contexts. This love (essentially) ignores not only our physical bodies but that whole embodiment which consists of our family, job, past and connections. At home, besides being Peter or Jane, we also bear a general character; husband or wife, brother or sister, chief, colleague, or subordinate. Not among our Friends. It is an affair of disentangled, or stripped, minds.

The title The Old Friends is deliberately ironic. What Horton Foote presents on stage is the exact opposite of what C.S. Lewis describes. Nevertheless, a visit to the Raven Theatre is well worth one’s time.