ASSASSINATION THEATER: The Most Important and Exciting Theater You Will See 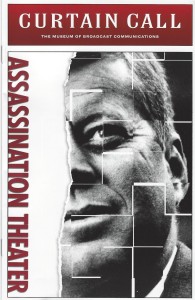 The first great work of theater, Oedipus Rex, is a whodunit. Ever since, solving mysteries seems part and parcel of what audiences expect of the theatrical experience.

I was a high school student beginning a lifelong study of theater when the shots rang out in Dallas. Being sent home from school due to an assassination of a president, and then, a couple of days later, watching on live TV the supposed assassin himself be assassinated, seemed to demand that our leader echo Oedipus vow to find the murderer:
“I will start afresh and once again/Make dark things clear.”

Instead, our government announced, in effect: Nothing to see here. Move along. And then created a commission to prove there was nothing extraordinary about the double murders.

Something seemed “rotten in the state of Denmark” (to quote another play about a political assassination) and I found myself, for over fifty years, reading every piece of information, every book, every theory, and every rebuttal to every theory. I guess I became what some would call “a Kennedy assassination nut.”

But I was not alone in the theater and film world:

By 2015 enough good information had been found to prove that President Kennedy had, in fact, been killed through a conspiracy of agents from the overlapping worlds of the CIA and Mafia.

A feeble cover story had allowed the CIA, the Mafia, and even the Kennedy family, to avoid image-tarnishing revelations, as each group blackmailed and threatened the other with the exposure of secrets if the de facto silence were ever broken.

They seemed to know, and fear, what happened to Oedipus when he discovered the truth – he was destroyed.

The only people who wanted the truth exposed, at any cost, were the American people.

Two such Americans – journalist Hillel Levin and retired FBI agent Zechariah Shelton – have connected over fifty years of dots with the documentary drama, Assassination Theater – the most important and exciting piece of theater you may ever see – and the dots just happen to lead to Chicago!

The roots of this kind of theater go back to the American depression’s WPA Living Newspaper- a theatrical form presenting factual information on current events, urging action through direct, experimental techniques, and the extensive use of multimedia.

As written by Hillel Levin, and brilliantly staged by Kevin Christopher Fox, the dynamic multimedia created by the team of Anthony Churchill, Matt Kooi, Christopher Kriz, Victoria Carot becomes the central player in the unfolding drama.

Just as the days of the assassinations were dominated by endless press briefings, so the stage erected in the Museum of Broadcast Communications forces the audience to participate in a fast paced briefing of what has happened since November 22, 1963.

The Museum of Broadcast Communications debuts as a charged new theatrical space for documentary drama, issuing a siren call to area producers and directors to create other works for this venue. (The Museum’s authentic period teletype machine stands by the theater entrance, still holding the actual bulletin announcing the president’s assassination!)

I must say it again: Assassination Theater is the most important and exciting theater you will see. Period.