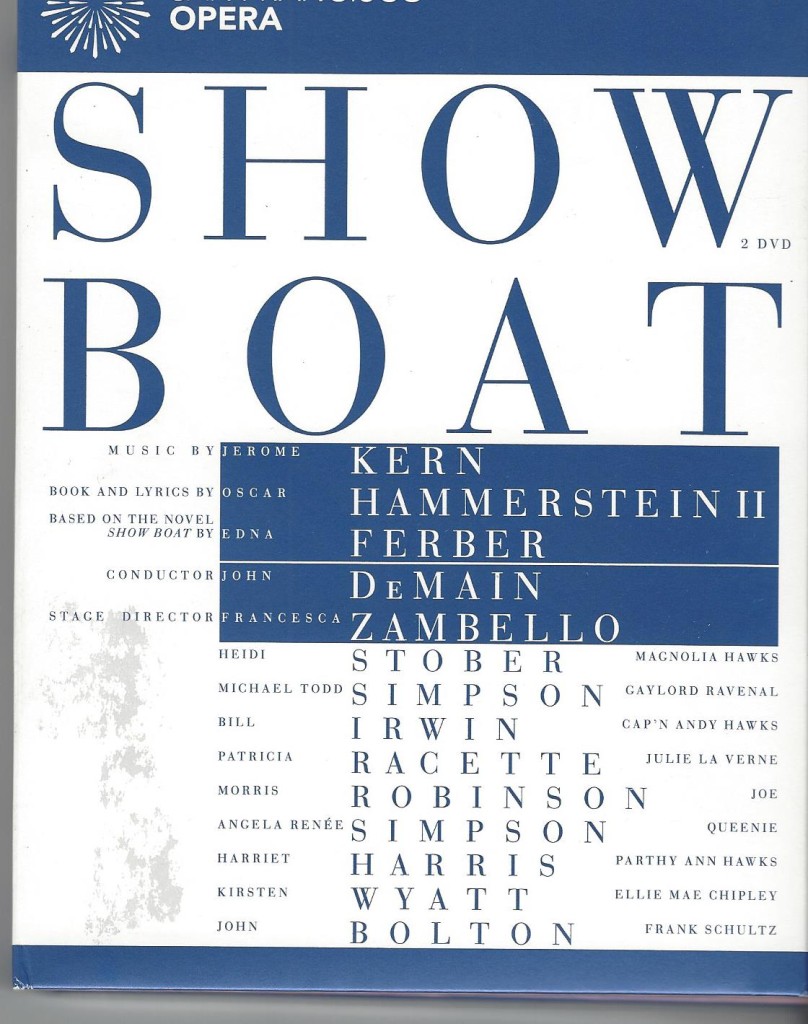 The recently released two disc DVD of the San Francisco Opera’s 2014 production of Hammerstein and Kern’s pioneer opera Showboat is a treat for many reasons.

First, rarely has the art of live performance recording been practiced to such great effect than by screen director Frank Zamacona and his EuroArts team. The shots are beautifully composed and the seamless edited action flows as if one were watching a live performance. A new standard for this difficult art has been established with this DVD set.

Second, the team responsible for the Lyric Opera of Chicago’s 2012 production of Showboat are responsible for this production as well. Director Francesca Zambello (the director of last season’s magnificent Porgy and Bess) is at the top of her theatrical powers, with an all-star design team of choreographer Michele Lynch, set designer Peter J. Davison, costumer designer Paul Tazewell, and lighting designer Mark McCullough. Ms. Zambello and conductor John DeMain have lovingly reshaped the musical while preserving Robert Russell Bennett’s lush original orchestrations. Never has an old musical come so alive.

The singers, drawn from the worlds of both opera and musical theater, are uniformly strong. Some of the performers shine, however. America’s Clown Laureate Bill Irwin is a Captain Andy for the Ages. Patricia Racette’s Julie LaVerne sings, dances, and acts to rend even the hardest of hearts. John Bolton (Frank Schultz) and Kirsten Wyatt (Ellie Mae Chipley) give bravura performances in characters usually regarded at second bananas. (Anyone who saw Ms. Wyatt’s 2012 performance of Miss Adelaide in the Great Lakes Theater production of Guys and Dolls knows what dynamism she can bring to a production.)

Though the performers may differ, Chicagoans can relish their memories of the Lyric Opera Showboat with the magnificent Chicago scenes of The 1893 Exposition, the Palmer House, Ontario Street, St. Agatha’s Convent and the Trocadero Club, as some of Jerome Kern’s most lovely music plays –Ol’ Man River, Can’t Help Lovin’ Dat Man, Mis’ry’s Comin’ Aroun’, Life Upon the Wicked Stage, You are Love, Why Do I Love You?, Make Believe, and Bill. Hard to believe so many great songs are in one musical.

You can order you copy here: SFO Showboat: