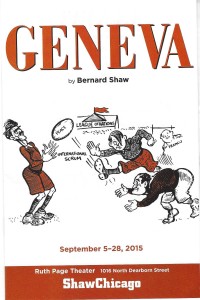 Despite being one of his most daring and prescient works, of all Bernard Shaw’s plays, Geneva is the most disparaged. The criticism moved Shaw to join those who hate the play. By 1938 he had remarked: “What a horrible play! Why had I to write it?”

Two events seem to have conspired to bring about Geneva, both involving Shaw’s dear friend, the classical scholar Gilbert Murray. First, Murray was appointed head of an obscure bureau of the League of Nations – “the Committee for International Cooperation”. Second, Murray dedicated his new translation of Aristophanes’ comedies to Shaw. Shaw decided to write an Aristophanic comedy with the League of Nations as its subject of ridicule.

Aristophanic comedy is based on a “’happy idea’ that is, of course, ridiculous, impractical, or extravagant. In Acarnians, for example, a citizen decides to make a separate peace with a warring nation.”1

Shaw’s “happy idea’ would be “What if the League of Nations actually did its job?”

So add to the list of Liza Doolittle, Jeanne d’Arc, Longfellow Deeds, and Jefferson Smith, the name “Begonia Brown”.

Shaw created Begonia Brown to rise to the top, while along the way exposing the foolishness of international politics. Begonia Brown is a lowly, and lonely, secretary at the League of Nations’ Committee for International Cooperation, who takes seriously both a Jew’s request that the League eliminate anti-Semitism and a Mexican widow’s request that the League abolish the practice of vendetta. By simply writing up court documents for each complaint and forwarding them to the International Court in The Hague, Begonia Brown becomes a celebrity, wins a seat in Parliament, accumulates a fortune, and is made a Dame Commander of the Most Excellent Order of the British Empire.

The Hague becomes a hotbed for a rogues’ gallery of international politicos of every strain. In the course of the play, we see that the more the League does, the worse the international situation becomes. The Judge, an inexperienced idealistic internationalist/super nationalist, believes that justice, mercy, fellowship, and peace can only be achieved when people give up the archaic notion of “human nature”, despite five thousand years of evidence.

The Judge’s position is challenged by the Widow Dolores who explains human nature: “My name is Revenge. My name is jealousy. My name is the unwritten law that is no law. Until you have dealt with me you have done nothing.”

Exasperated in his search for justice, the Judge sentences those in his docket to “immediate execution, no liquidation.” He then concludes, “Man is a failure as a political animal. The creative forces which produced him must produce something better.”

But before something better can take place, the Judge receives a phone call announcing that “the orbit of the earth is jumping to its next quantum. Humanity is doomed.”

The Judge realizes that only the end of the world can ever end war, along with law, leaders, foreign secretaries, judges and generals. The Widow, facing the end of the world, finally rejects vendetta, announcing that “God will execute His own judgement on us all. But He is merciful; for I shall never dream again.”

The only happy epitaph the Judge can muster for his League  of Nations Court is “at least they came.”

Shaw populated his play with characters vying for the spotlight. Director Robert Scogin has assembled an all-star cast of actors chomping at their bits to take stage and shine. Heading the list is the Begonia Brown of Jhenai Mootz, an actress who seems to specialize in plucky characters. She has already taken seriously the voice of God telling her to save France, so here she has no trouble taking seriously the impossible demands of Brown’s petitioners. Her dazzling St. Joan finds a kindred spirit in Begonia Brown, as she proves that the only thing worse than not doing your job may be doing it. Will Klinger’s Jew breathes life into politically incorrect speech (in tandem with Kate Young) with a winsome performance. Kate Young gloriously tears the walls down as the Widow Dolores. She’s an actress born to play Senora Frola in Pirandello’s Right You Are (If You Think You Are) Così è (se vi pare). Joe Lehman brings to the role of the journalist the zippy earnestness of Superman’s Jimmy Olsen. Skip Lundby captures both the smarm and indignation of the English Bishop. Jack Hickey as Commisar Prosky of Svnarkom and Pohtl channels Mikhail Gorbachev’s “Communism with a Human Face” as he wins over the audience as Gorbachev won over the West. Nick Polus makes the boring bureaucratic Secretary of the League of Nations a very interesting human being. No mean trick. Richard Marlatt, no stranger to stage assemblages of Shaw’s theatrical odd ducks, creates one of the oddest with Sir Orpheus Midlander, the British Foreign Secretary. As with all of Marlatt’s incarnations, the guy may be odd, but, with Marlatt, he is recognizably all too human. And no one can deliver a full-voiced “Good gracious” to greater effect than Mr, Marlatt. Gary Alexander, usually cast as a Shavian odd duck along with Marlatt, this time presents the cold Dutch Judge as a man clinging to but one idea, and a bad one at that. Charles Stransky’s Bombardone, an Italian Dictator, rightly seems to have wandered over from an Italian grand opera company. His stellar performance makes Martin Scorsese’s Italian bosses look like a bunch of wimps. Jonathan Nichols’ Ernest Battler, a German Dictator, wonderfully plays the fuehrer as a volcano about to erupt. Matthew Fahey’s General Flanco de Fortinbras, a Spanish Dictator, has all the warmth of cold steel. Appropriately so, too.

These actors’ great performances cannot be appreciated through one sentence summaries. You must see them yourself to really appreciate the sheer mass of talent now on the Ruth Page Theater’s stage.

Geneva, as written by Shaw, is a mess of a meandering play.

If Shaw could see this performance, he would surely retract his negative opinion.

Only a man who knows Shaw’s tricky stagecraft as well as Scogin could have pulled off this miracle. Robert Scogin is a Chicago treasure.