GRAND CONCOURSE: The Trouble with Forgiveness 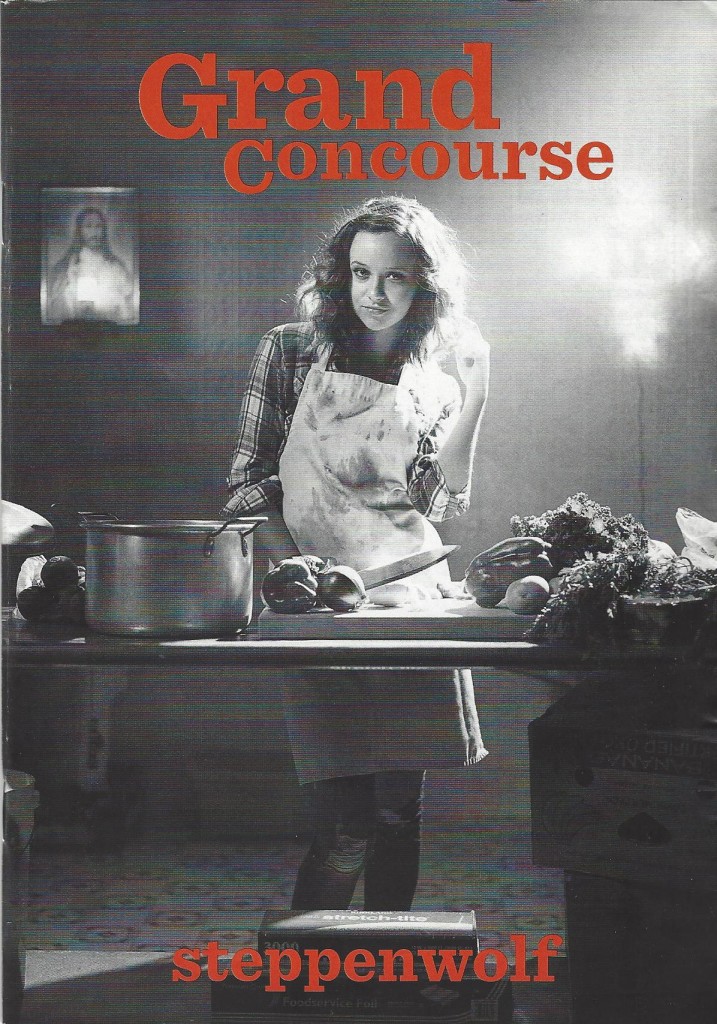 The great playwrights – Aeschylus, Sophocles, Euripides, and Shakespeare – viewed tragedy as placing a virtue in a situation in which the application of that virtue creates suffering and catastrophe.

Heidi Schreck, with her play Grand Concourse, joins the list of playwrights by applying the same formula, but with a hitherto unused virtue – forgiveness.

In the Bronx, New York, in St Joseph’s Catholic Church, located near the Grand Concourse, in the basement, a weary and worn heroic nun named Shelly supervises a resource-strapped soup kitchen. She has a meager staff: Oscar the security guard, but many clients, represented by Frog, a gifted man suffering from both mental illness and alcoholism. Shelly warns all volunteers, including the newest, Emma, not to fall for Frog’s con or they will speed his destruction.

Along with the writing, the acting couldn’t be better. In 1934 Dorothy Parker famously said of Katharine Hepburn’s performance in the film “Christopher Strong”, she runs “the gamut of emotions from A to B.” Well, Mariann Mayberry’s performance of Shelly is of exactly the opposite kind. While playing a deliberately calm character, Ms. Mayberry miraculously runs the gamut of emotions from A to Z, stopping along the way at every half and quarter tone, while taking her audience along for the tour de force ride! If for no other reason, (and there are many reasons) to see this play, Ms. Mayberry must be near the top of the list. She is surrounded by one of the strongest possible casts: Victor Almanzar as Oscar and Brittany Uomoleale as Emma make their Steppenwolf debuts, he with a fascinating balance of machismo and vulnerability, she with cloying diffidence – a vixen for all seasons. Steppenwolf veteran Tim Hopper brings to Frog the same infectious mania he created in Conor McPherson’s Doc in The Night Alive. But this amazing artist can reveal so many variations of the type  that his mere presence is a joy.

Emma presents herself as a young woman abused by her parents, thrown out of college for unknown reasons, looking for something to do with her time, hoping that doing for others will be of some benefit to herself. Shelly and Victor jump at the chance to put her to work. As the kitchen’s clients fall in love with Emma’s winsome manner, Emma reveals she is suffering from leukemia and taking chemotherapy treatments. Shelly and Victor are dazzled by this young suffering servant.

So impressive is Emma’s work that her other actions are overlooked. Emma cuts herself, breaks rules she doesn’t like, seduces Victor as a succubus, casually mentions that The Omen is her favorite film, and is eventually found to have neither abusive parents nor leukemia.

Shelly is stunned to learn of this betrayal.

Christians are commanded to forgive, as Emma is quick to remind Shelly.

But what do we mean by forgiveness in 2015 America? Why must Christians forgive? And how does one forgive? How does one know one has been forgiven? Must everyone and everything be forgiven?

The play’s dramaturg, Dassia N. Posner *, lays the question out in an insightful interview in the program: “The play deals in an unusual, but provocative way, with the question of what it means to forgive”. The play’s exceptional director, Yasen Peyankov, adds, “It’s about the boundaries of forgiveness, and how flexible and stretchable those boundaries are.” To which the playwright suggests, “Forgiveness is a process. And it’s actually a very rigorous, difficult, painful one.”

Do we forgive merely to be forgiven by God for our own actions? Is forgiveness simply giving one a second chance? A wiping clean of the slate? What does one really mean when one says she’s sorry? Does it have a subtext of “that I got caught”? Can the request for forgiveness even be a tool for the manipulation of good-hearted people?

The second half of Grand Concourse explores these and many other related questions in  dramatic and exhilarating ways.

Despite her reservations, Shelly gives Emma a second chance. Shelly comes to believe the act of forgiveness to have been right. Emma seems so changed that Shelly, before heading to California to visit her dying father,  leaves Emma in charge of the kitchen, her apartment, and even her beloved cat, Pumpkin. Shelly has been praying for help in forgiving her father before he dies. Seeing the results of her forgiveness of Emma has strengthened her waning faith. Emma’s changed life has rejuvenated Shelly’s faith in the power of forgiveness.

However, when Shelly returns, she discovers, to her devastation, that Emma has vanished, and her dear cat has been deliberately starved to death in her apartment, now made a shambles by a desperate cat. When found, again, Emma  plays the “Can-you-forgive-me? “card which has worked so well among Christians in the past.

A crisis has been reached in Shelly’s faith.

The climax asks: Will Shelly forgive Emma’s repeated betrayals, not only of her misplaced trust, but also of Emma’s willful and deliberate destruction of Oscar’s engagement to Rosa, and her destructive manipulation of Frog’s new-found, but ultimately misplaced, faith in himself.

The answer is stunning: No, I will not forgive you.

Why? Because you are not merely a sinner…

Unmedicated, Frog explodes in paranoia and rage. Immediately, Shelly is energized by a supernatural strength to minister to Frog’s overwhelming needs with amazing tenderness, calm, compassion and respect. She is transformed by genuine human suffering into the Blessed Mother’s human incarnation as she cradles Frog in a breathtaking pieta.

Shelly reveals her decision to leave the order of nuns. Free from the obligation of required formal forgiveness, Shelly begins to radiate an inner peace and joy. She is now able to lift her eyes to heaven and joyously pray to God, bathed in His grace and love.

We see the truth of St. Paul’s belief “that all things [even betrayal, even leaving the order of nuns] work together for good to them that love God, to them who are the called according to His purpose.”

The audience is left to wrestle with the questions and actions of the powerful drama set amid Joey Wade’s beautiful set –  the stained glass windows, shrouded in age and neglect all mysteriously hold images of the Blessed Mother, the woman of all women radiating forgiveness from her heart while her mouth remains silent. Below the windows is the quintessential modern soup kitchen, shiny industrial appliances decorated by kitschy religious brick-a-brac: two worlds in conflict, two understandings in subtle conflict: the Christian and the secular in a wrestling match “not against flesh and blood, but against principalities, against powers, against the rulers of the darkness of this world, against spiritual wickedness.”

The play may keep you up all night as you try to understand the dynamics of this beautiful, challenging  drama:

Such ancient Christian notions, to many in a 2015 audience, would seem pure superstition. But Grand Concourse allows that understanding to be perhaps the best explanation of what we see and hear on stage.

Grand Concourse is a rarity: a play which causes a modern audience to struggle with ancient ideas and powers. You cannot afford to miss it.

*I had the pleasure to first know Ms. Posner as a theater student of mine at Bates College.

Like Loading...
July 6, 2015 – 5:41 pm | By Paul Kuritz | Posted in from Paul, Quotations, The Gospel of the Kingdom, Theater, Theology | Comments Off on GRAND CONCOURSE: The Trouble with Forgiveness