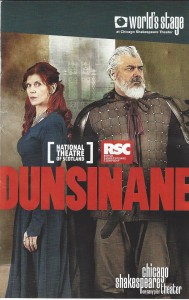 David Grieg’s exciting new play Dunsinane, an imaginative follow up to Shakespeare’s Macbeth, illustrates profoundly the difference between Shakespeare’s world and our own.

Shakespeare’s characters lived as part of the Great Chain of Being – a cosmos vertically connecting each lowly jot and tittle of the earth in a direct line, through human beings, to God. In crises, characters deliberated the rightness or wrongness – the morality – of each possible choice. In life-changing situations, the characters’ souls could find language – rising even to the realm of poetry – appropriate to both who they were created to be and what their intense situation required.

Grieg’s characters, however, are our contemporaries.They live in a world in which all are chained horizontally – the soulless animal no better than one created in the image and likeness of anything larger than themselves. All are simply part of the animal kingdom – trying to survive, eking out a bit of happiness, vying only for power, and exercising that power only in order to maintain that power. Expedient means rule the bleak days. When overcome by emotion, these characters have nothing to say; their silence proclaims their hollowness.

As George Bernard Shaw said of Victorian Sardou’s dramatic stage play La Tosca: “Such an empty-headed ghost of a shocker…Oh, if it had but been an opera!”, one could wish that Dusinane had been penned by William Shakespeare.

But what I find as disappointments in Dunsinane cannot be laid at the feet of the playwright, who is, after all, but the “mirror” of our nature. The fault, dear theatergoer, is in ourselves, and the world we have created for our playwrights “to show the very age and body of the time his form and pressure.”

The actors, especially Darrell D’Silva (Siward) and Siobhan Redmond (Gruach) could not play more effectively, the designers could not have captured the parallels between there and here, then and now, more evocatively in setting, costume, light, sound, and music. Director Roxana Silbert deserves bravas for the engaging evening she has made.

And the Chicago Shakespeare Theater must be thanked for bringing this important new play and production to our city.

Like Loading...
March 6, 2015 – 11:42 am | By Paul Kuritz | Posted in History, Mini-Review, Quotations, Theater, Theology | Comments Off on Dunsinane: Our World, Unfortunately