Ivan Jovic: An Interview with the Serbian Director 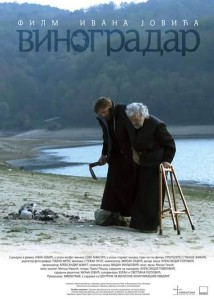 The world is awash with film and video. The internet and digital technology have made film making, film distribution, and film viewing commonplace.

Fortunately the rise of film festivals has helped sort and sift the films to ease the bewildered film viewer.

One such festival, the ByzantFest 2015, has introduced me to one of the most gifted contemporary filmmakers, Ivan Jovic of Serbia.

His short film, Winegrower, won the festival’s award for best film and best screenplay, and in my opinion, should have swept the board in every category in which it was eligible. Jovic’s film style resembles that of Russia’s Andrei Tarkovsky, Pavel Lounguine, and America’s Terrence Malick. At Jovic’s heart are the primary subjects of art – death and love- and the knowledge that the world is an awful place, and the possibility that art – film – can transcend and transform pain into something good.

Jovic’s latest film, The Healing, made with his screenwriter wife, Monja Jovic, is presently winning awards in Europe. The Healing is about the life-long process of forgiveness.

I had the honor to interview Ivan Jovic, with his wife and collaborator, Monja Jovic, in the midst of the excitement of the premiere of The Healing:

Paul Kuritz: Tell me about yourself. How did you get interested in film?

Ivan Jovic: Well, I wrote several books, including two novels. Writing can be a really tiresome and lonesome activity. Yet the inspiration is the same as in film: questioning the meaning of our existence, that moves between two poles, love and death. And in the experience of filming, the author is not alone. You are surrounded by other people who contribute to the process.

PK: Did you study at a film school?

IJ: I learned a lot from two film professors: Zoran and Svetlana Popovic. But I went to their film school with an already established aesthetic. They taught me a lot, in terms of craft. Before that, I was simply a film maniac. And a film critic, in younger days. I normally watch a film per day. At one point I decided to make films I myself would like.

PK:In the supplemental material with the trailer for The Healing, you quote Tarkovsky and Antonioni. Are they your primary influences? Any others? What are your favorite films? Screenwriters? Directors? What appeals to you in their work?

IJ: Tarkovsky, absolutely. I don’t think anyone ever went so far in artistic filmmaking as he did. I love Bergman, but Tarkovsky is something special. Someone like Tarkovsky could happen only in the Russian cultural context, like Dostoevsky. Russian culture is fascinating: European, but still open to the east… and then, there is their version of orthodoxy spirituality which is so exciting… What I like about Antonioni is his discipline when it comes to the shot. Everything is well composed, everything seems planned, and that makes you wonder what lies behind the picture itself. For me, the film is a picture, before everything else. And the true art of filmmaking is making that picture so suggestive, so evocative, that it leads you beyond the picture itself. Also I love Fellini, and Wenders. I even like some works of Jarmusch.

PK: What role does Orthodoxy play in your life and work as a filmmaker?

IJ: For me, orthodoxy is the way I live. It is the way my ancestors lived and died. I wasn’t raised that way, though. I grew up in socialism. So, paradoxically, I had to discover Orthodoxy all over again. It was a discovery for me. Now, it is the way I consider everything in my life. It is actually much simpler than it may seem. God is love. Love God, the very principle of love. Love your neighbor. It is a manual for living and dying in peace. Just try to live by this simple manual, and all the things in your life will come to the right place. Of course, in order to achieve that, you have to be equipped for spiritual warfare: to struggle every day to achieve these goals. Struggle with yourself to become your best possible version – the version of yourself as close to the principle of love as possible.

PK: How do you fund your film projects?

IJ: I funded The Healing by myself, and with a little help from my friends. The Film Centre of Serbia, a national film fund, supported the post-production. But, still, it is a low budget project. I believe in that kind of project: saying as much as you can with the least means.

PK: Where are your films available?

IJ: Well, you watched the Winegrower during the Byzantfest. The Healing is still in film festivals. We will try to make it available to the audience after it finishes its festival life.

PK: Your film technique reminds me of Archibald Macleish’s understanding of how a poem works:

PK: Is that a fair analogy?

IJ: Well, I can only say that I feel grateful and flattered that you understood my work in context of this wonderful piece of poetry. I only think that it is both important “to be“ and “to mean“. For example, look at the art of performance. Marina Abramovic 1 walks over the Great Wall of China, taking days. Her walk is an actual act of walking – “to be“ – (from the poem), but it is, at the same time, a symbolic act. It means something that is beyond just an act of walking. And that is art. You need to have both elements.

PK: Winegrower is a very evocative film. Nevertheless, what did you hope the audience might think about, ponder at the film’s conclusion?

PK:The monks, the Winegrowers, live to produce the Eucharistic blood of Christ. I got the sense that the relationship between the monks and their relationship to their work should apply to all of us. Is that a fair understanding?

IJ: I think it is. We are all winegrowers. The old monk in the film wants to end his life as he had lived it: as a winegrower. I think that we create our relationship with God through our gifts. God gave us gifts: we are making these gifts grow, and by that, we return them to God. We must never leave our vineyard. By leaving it, we leave both God and the best potential of ourselves.

PK:Some of the most beautiful images in Winegrower come through your long shots, shots becoming rare in today’s films, because so many films are seen only on small screens. Tell me what you think of long-shots. What role do they play in Winegrower?

IJ: As I said, the film is a picture. If we want a viewer to contemplate what we want to say, we must give him the time to enjoy the picture, and to ask inner questions about the picture. That’s why the composition of every shot is so important. That is why one of my most precious allies is my director of photography, Pablo Fero. He understands what I want to achieve.

PK:The beautiful quotation: “Space is only time visible in a different way“ by Ivan V. Lalic might be missed if the viewer thinks the credits signal the end of the film. Who is Ivan V. Lalic and how does this idea in the quotation play out in your life, in your films?

IJ: My wife, Monja, came up with that quotation at the end. We both love Lalic very much. Ivan V. Lalic 2 is one of the deepest poets of all time. He found great inspiration in Orthodoxy and Byzantine culture. The quotation at the end sums up the experience of time and space. The old monk spent his whole life in the vineyard, so the space of the vineyard can actually be expressed through the years of careful, hard, and complex gardening. The monk’s gift is to be a winegrower, and we can see, in the vineyard, that he nurtured his gift. He doesn’t want to give up now that he is older and the vineyard is too far for him. The vineyard represents years of hard work. It represents the time of our lives that we spend fighting the good fight. Life is a spiritual warfare.

PK: You are moving toward full-length films.

IJ: The Healing is, actually, a full length feature film. And I am also working on a large scale documentary project about the Second World War, that has over 450 hours of people’s testimonies.

PK: Why are you leaving fiction, for which you clearly have been gifted by God, to work in another genre? (I don’t want to lose more fictional films by you!) 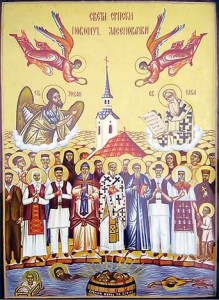 Monja J: Half of my family died in Croatian concentration camps during WWII, mostly Jasenovac. They were killed in the most awful ways one can imagine, just because they were Orthodox Serbs. Jews, Roma, and antifascist were also killed. The entire Jewish community just vanished, and everyone seemed to forget about the suffering of the Roma. Due to political reasons after the war, the former Yugoslav government did not remember those victims in the right way. Now, we live in a country where cultural remembrance, our collective memory, is being destroyed. So we felt that we needed to make such a project, so we can leave these testimonies to our children, because these people are dying. Their testimonies are so incredibly poetic, wise, and profound, that I m actually working on a script that is inspired by them (I wrote the script for The Healing also) So, we filmed 96 people, 96 lives on screen. It was a journey and we learned so much. and we felt like it was a task that God gave us to do. Ivan is editing the material, and he says that it is stunning

So we will have a poetic documentary, don’t worry!

Here is the trailer for The Healing, along with some background information about Ivan and Monja Jovic

Like Loading...
February 25, 2015 – 9:30 pm | By Paul Kuritz | Posted in Uncategorized | Comments Off on Ivan Jovic: An Interview with the Serbian Director