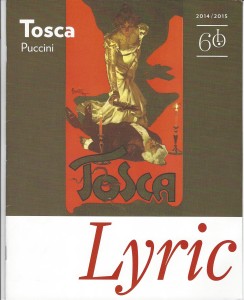 John Caird’s magnificent production of Puccini’s Tosca is revolutionary. The director, who has already secured himself a position in theater history with his genre-defining eight-and-one-half hour two-part stage adaptation of Dickens’ novel Nicholas Nickelby for the Royal Shakespeare Company, and his direction of the world premiere production of Les Miserables, also for the Royal Shakespeare Company, presents the grim, reality-soaked opera in a clean and spare unit set to underscore the important truth of this Italian verismo opera – – politics destroys art.

In Caird’s Tosca we find Floria Tosca, her hope for life in a nunnery abandoned to follow the Pope’s directive to share her God-given gift for singing with the world, losing her remaining dream – married love in a secluded nest away from the world’s distractions- to a deceiving political revolutionary.

The man Tosca believes is an artist who shares her dream is, in actuality, an undercover political agent posing as an artist in the cause of the latest revolution. Caravadossi (Jorge De Leon) uses Tosca to further his revolution as much as Scarpia (Mark Delavan) hopes to use Tosca to maintain his own political power. These two men, each in his own way, lead Tosca to commit two mortal sins – murder and suicide, – thereby denying her any possibility of a peaceful return to her Catholic faith.

The genius of Caird’s production begins in Bunnie Christie’s settings and costumes. They refuse to identify either politician with any political viewpoint. Scarpia could easily be a man of the political right or of political left. It doesn’t matter: it is politics itself which is lethal to art.

The opera‘s second act is, in my opinion the evening’s highpoint. The entire stage becomes a beautiful choreography of physical actions merging with Puccini’s dynamic score. Music and drama become one, wonderfully conducted with great sensitivity to the stage action by Dimitri Jurowski. The torture scene is beyond excruciating and Tosca’s prayer, as sung by the fabulous Hui He, is heart-breaking.

The imaginative use of stage properties characterizes Caird’s productions. Tosca is no exception: Scarpia’s apple slicing; Tosca lighting candles everywhere she goes; the sinning Tosca removing her crucifix to place it on the dead Scarpia’s chest; Tosca first stabbing herself in the neck before throwing herself off the parapet, among many others.

Caird’s one misstep might have been to conceive of the shepherd as the spirit of Tosca’s lost faith, haunting her throughout the play. However the idea never moves beyond concept to become a force in the action. But this is a minor chink in a monumental production. As I learned in high school: “Quandōque bonus dormītat Homērus”: (“Even Homer nods”.)

As demonstrators scream at opera performers from the audience, or jump onto the stage to wave banners, and as pickets patrol the entrances of our opera houses demanding conformity to one political dogma or another, Puccini’s warning about the politicization of art, as underscored by John Caird’s production, could not be timelier.