Life or Death in Black and White 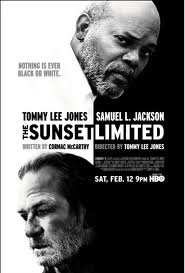 Cormac McCarthy’s recent movies – No Place for Old Men and The Road –  present apocalyptic visions interspersed with faint Christian chords. His  Sunset Limited  moves the chords to the foreground in the person of Black, a born-again Christian and former convict, and a nihilist professor,  named White.  Black has  rescued White from a suicide attempt (an act of love –agape) at the hands of the onrushing  Sunset Limited train. McCarthy’s ensuing chess match is unique:  White wants to lose by killing his own king (himself), while Black’s King (Jesus) has already died so that Black and White might both live.

The chess match poses White, representing the Present Age – corruption, death, despair, violence, evil,  betrayal, sorrow, agony,  and death, versus the Age to Come -everything that’s pure and lovely and beautiful and noble and wise, renewed – represented by Black. The Age to Come arrived in the Present Age in the person of Jesus. It arrives for White in the person of Black. Both Jesus and Black defeated death. Now White must decide whether to accept the unmerited gift of a new life.

But White has lived without relationships so long that he is now immune to their life-giving power. Black’s touch is the first White can recall. The food offered by Black is the first White can remember sharing. And their conversation around Black’s table is the most engaging White has had in many, many years. White is reluctant to leave. The possibility of a brotherly relationship (philiadelphia) with White  retains some allure.

Professor White is already “dead” (Ephesians 2:1) when Black snatches him from the speeding train. White rejects the possibility of discovering the purpose God has for him: “to grow in fellowship with him, and find freedom and satisfaction with him  in fellowship  rather than in isolation.”[i] . Instead, unable or unwilling to change, White clings to his own understanding and purpose – to die.

Rigid like Victor Hugo’s Inspector Javert, White chooses suicide rather than embrace a new friend and a new life. Jean Valjean, another born-again ex-con, sings at the end of Les Miserables:

To love another person is to see the face of God

White has seen Jesus, has touched Jesus, has been saved from death by Jesus,  and is offered the love of Jesus. Nevertheless, White rejects all of the gifts.

At the film’s end, Black weeps, asking God if he did all that he  could for White. God answers the question with the sunrise, an act of common grace.

N.T. Wright reminds us of the message inherent in the sunrise:

Death is the defeated enemy, and its corruption and decay will not have the last word.[ii]

The Sunset Limited has ended. The Risen Son is eternal.