William Holman Hunt and the Question of “Christian” Art 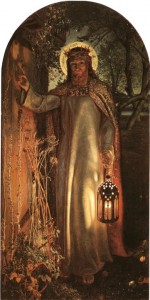 The death of Thomas Kincade (1958 –2012) has renewed the discussion of Christian art – in what way can art be considered Christian? Christian art critics seem to consider works of art they like, for whatever reason, to be “Christian” and works they do not like to be unChristian or inferior.

Over one hundred years ago William Holman Hunt (1827 – 1910), one of the creators of art’s Pre-Raphaelite movement, found conversion to Christianity while painting his famous work, The Light of the World. Hunt’s career was thereafter devoted to creating Christian art.

Mr. Hunt’s views are evident in Holman Hunt. Masterpieces in Colour (1908) by Mary E. Coleridge. The author notes that as a young student the “lessons from the New Testament read to him…made a deep impression upon his mind, and were remembered in years to come.”

In art school, Holman saw nature differently than his instructors who were in a “brown period”: “It took wonderful courage in those days to go on thinking that grass and trees were green, when all the eminent teachers maintained that so far as Art was concerned, they were brown, and that if you only painted them brown for several years “an eye for Nature” would come.”

Hunt’s first “Christian” painting, his first work with a subject drawn from the Bible, was The Light of the World (1851-1853). Historians believe the work illustrates the Pre-Raphaelite intention of showing the relationship between signs or symbols and visible reality. According to the Rev. Richard Glover (1862), the idea of painting the picture was suggested to Mr. Hunt by a sonnet entitled “Tomorrow” by Lope de Vega. (The translation which follows is by H. W. Longfellow):

Lord, what am I, that, with unceasing care,

Wet with unhealthy dews, before my gate,

And pass the gloomy nights of winter there.

O strange delusion! that I did not greet

Thy blest approach, and 0, to heaven how lost,

If my ingratitude’s unkindly frost

Has chilled the bleeding wounds upon Thy feet.

” Soul, from thy casement look, and thou shalt see

How He persists to knock and wait for thee! ”

And O! how often to that voice of sorrow,

And when the morrow came, I answered still

Based on  Revelation 3:20 – “Behold , I stand at the door, and knock : if any man hear my voice, and open the door, I will come in to him, and will sup with him, and he with me”, The Light of the World depicts Christ knocking at a handle less door in the wild.

Hunt painted the entire life-sized painting out of doors , whenever the moon was full, from nine o’clock at night until five o’clock the next morning.

Observers at the work’s first public showing were so baffled and contemptuous of what they saw, that art critic John Ruskin wrote a letter to the London Times defending and explaining the work:

On the left hand side of the picture is seen this door of the human soul. It is fast barred: its bars and nails are rusty; it is knitted and bound to its stanchions by creeping tendrils of ivy, showing that it has never been opened. A bat hovers about it; its threshold is overgrown with brambles, nettles, and fruitless corn,–the wild grass “whereof the mower filleth not his hand, nor he that bindeth sheaves his bosom.” Christ approaches it in the night time,–Christ, in his everlasting offices of prophet, priest, and king. He wears the white robe, representing the power of the Spirit upon him; the jewelled robe and breastplate, representing the sacerdotal investiture; the rayed crown of gold, inwoven with the crown of thorns; not dead thorns, but now bearing soft leaves, for the healing of the nations.

Now, when Christ enters any human heart, he bears with him a twofold light. First the light of conscience, which displays past sin, and afterwards the light of peace, the hope of salvation. The lantern, carried in Christ’s left hand, is this light of conscience. Its fire is red and fierce; it falls only on the closed door, on the weeds which encumber it, and on an apple shaken from one of the trees of the orchard, thus marking that the entire awakening of the conscience is not merely to committed, but to hereditary guilt.

This light is suspended by a chain, wrapt about the wrist of the figure, showing that the light which reveals sin appears to the sinner also to chain the hand of Christ.

The light which proceeds from the head of the figure, on the contrary, is that of the hope of salvation; it springs from the crown of thorns, and, though itself sad, subdued, and full of softness, is yet so powerful that it entirely melts into the glow of it the forms of the leaves and boughs, which it crosses, showing that every earthly object must be hidden by this light, where its sphere extends.

I believe there are very few persons on whom the picture, thus justly understood, will not produce a deep impression. For my own part, I think it one of the very noblest works of sacred art ever produced in this or any other age.

According to art historian George P Landow, “The almost astonishing popularity of this picture in nineteenth-century England and America appears not only in the fact that many took it to be the single most important contemporary portrayal of Christ but also in its influence upon popular poetry and book illustration. Like Tennyson’s In Memoriam, The Light of the World succeeded in reaching a large audience, eventually becoming an element of popular culture. The picture became known beyond the narrow confines of the art world by means of its engraved version, and it was popularized even farther by sermons and devotional poetry… Hunt’s painting entered the realm of popular religious illustration. W. H. Fisk drew upon The Light of the World for his picture which accompanied Kimball’s “The Guest,” and Hunt was also the clear source of W. Rainey’s “Christ before thy door is waiting” in William Adams’s Sacred Allegories.”

By 1911 the Encyclopedia Britannica noted, “This work produced perhaps the greatest effect of any religious painting of the century.” “For the first time in England,” wrote William Bell Scott, “a picture became a subject of conversation and general interest from one end of the island to the other, and indeed continued so for many years.”

William Holman Hunt postulated the function of the Christian artist:

“The vital ambition of an artist is to serve as high priest and expounder of the excellence of the works of the Creator—choosing the highest types and combinations of His handiworks, as the Greeks taught the after-world to do, so that men’s admiration may be fascinated by the perfection of the works of the Great Author of all, and men’s life thus may be a continual joy and solace.” (Coleridge)

He held that an artist was accountable only to God.

For William Holman Hunt, the power to create came from his God-given talent, his academic training, and the indwelling inspiration of the Holy Spirit. For the non-Christian, only talent and training were recognized.

So there does seem to be three clear characteristics of Christian art:

So how does one determine if a work of art is or is not Christian?

We have no way of checking whether or not  the Holy Spirit was involved in the creation. And opinions may vary as to whether the work  does or does not glorify God.

But we can all see whether the core of a work involves a particular redemption story or the universal Redemption Story; if the cross of Christ (actual or symbolic, visible or invisible) is present, it is a Christian work of art. If absent, it is non–Christian.

Critics employ the same formalistic compositional standards to discuss whether a work of Christian art is good or bad, successful or flawed, which they use to evaluate all works of art. However, lack of formalistic skill in painting does not mean a work of art is un-Christian. It means either that  it is flawed or that  the artist is unskilled.

No subjects  lie outside the range of Christian art. To say that  some were off limits would be to say that some people were beyond Christ’s redemptive power.

Above all else, one feature is present in all Christian art: the cross of Christ, literal or symbolic,visible or invisible, but always present and working,  knocking and waiting, waiting and knocking, even though the knock may go unanswered.