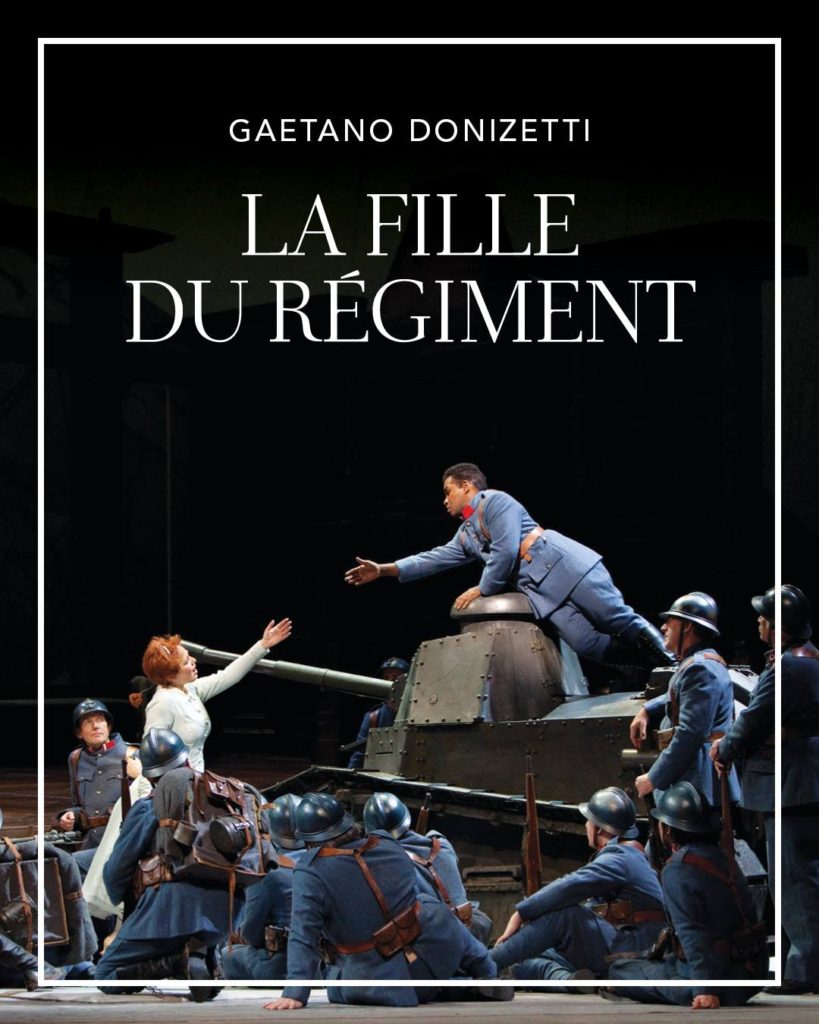 With seven operas by the young upstart  Italian  composer opening within a year, the French composers of Paris had had enough.

The La Fille du Régiment received a cool reception when it premiered in Paris on 1840. But the work caught on, so that in 1840 there were  forty-four  performances, more than six hundred in Paris alone by 1875, and by 1914, just 75 years after its premiere, over 1000 performances by the Opera  Comique, the opera’s original home.

Throughout the years many prima donnas have become associated with the title role and many wars have served as the backdrop for the libretto by Jules Henry (1799-1875), a frequent collaborator with the great dramatist Eugene Scribe, and Jean Francois Bayard (1796-1853), Scribe’s nephew.

The original cast featured Marie-Julienne Boulanger as the Marquise, Juliette Borgeoise  as Marie, Blanchard as Duchesee, and Mecene Marie de L’Isle as Tonio. (De L’Isle’s daughter Celestine would be the original Carmen  while Mme. Boulanger’s grand-daughter, Nadia, would become a prominent conductor and composer in the 20th century.)

Frieda Hempel (1885-182955) revived the opera during the 1917-1918 season, giving the opera special significance with the Great War in the background. She even interpolated the English ballad “Keep the Home Fires  Burning”. During World War II, soon after the Nazis occupied France, the opera regained political significance as Lily Pons (1898-1976) draped herself with the flag of the Free French Forces to sing the Marseillaise while carrying a cross-bearing  flag of Lorraine. This version of the Donizetti classic was directed by Hervert Graf opened New York’s Metropolitan Opera House’s 1941 with Ms. Pons wearing a wardrobe by Valentina. The New York Times noted that “the two smartest things in the show were Miss Pons’s very chic and telling costumes and her singing of the Marseilles’ at the end, followed by the cast singing the national anthem.”[ii]

What can one say about Pretty Yende and Javier Camarena?

Their voluminous stage charm, exquisite singing, and fully-committed acting made time fly by. Their very presence seemed to inspire everyone else on stage to new heights of performance excellence.

The pairing of Pretty Yende  as Marie with Javier Camarena as Tonio was nothing less than inspired. Each singing-actor brought a unique performance blend. Ms. Yende combines adorability with strength, while Mr. Camarena mixes heroism with softness. The duo creates theatrical excitement throughout the performance. Mr. Pelly’s direction is very physical. The actors and chorus seem to never stop moving, always appropriately, always imaginatively, always humorously.  Chantal Thomas’ settings of folded maps and postcards (including one of the Gallic chanticleer) were delightful, though the 1970s Sunbeam iron seemed inappropriate for Marie’s ironing of the 1917 soldier underwear.

Revival director Christian Rath deserves great credit for maintaining  Mr. Pelly’s vision, in which Laura Scozzi’s lively and amusing choreography seems as fresh as the day it was set.

Tonio’s “Ah! Mes amis quel jour de fete!” featured 18 high Cs, due to the unprecedented encore for a Live Met HD broadcast. But Marie’s poignant subsequent aria deserved the sustained applause it received as well. As Sulpice, the great Frenchman Maurizio Muraro, though ill, summarized the entire stage tradition of the classic French comedian in his enormously triumphant performance. As the Marquise of Berkenfield, the magisterial Stephanie Blythe schooled Kathleen Turner’s Duchess of Krakenthorp in the important differences between playing in opera and playing around. Ms. Turner responded with improvisations which could most charitably be described as stupid. The Metropolitan Opera Chorus was front and center, acting and singing a variety of roles with style, humor, and beauty. The entire proceeding were joyously led by the wonderful maestro Enrique Mazzola.

When the curtain rang down, the Met audience and audiences around the world thundered their appreciation.

La Fille du Régiment was a great surprise and a great March treat for eyes as well as ears.