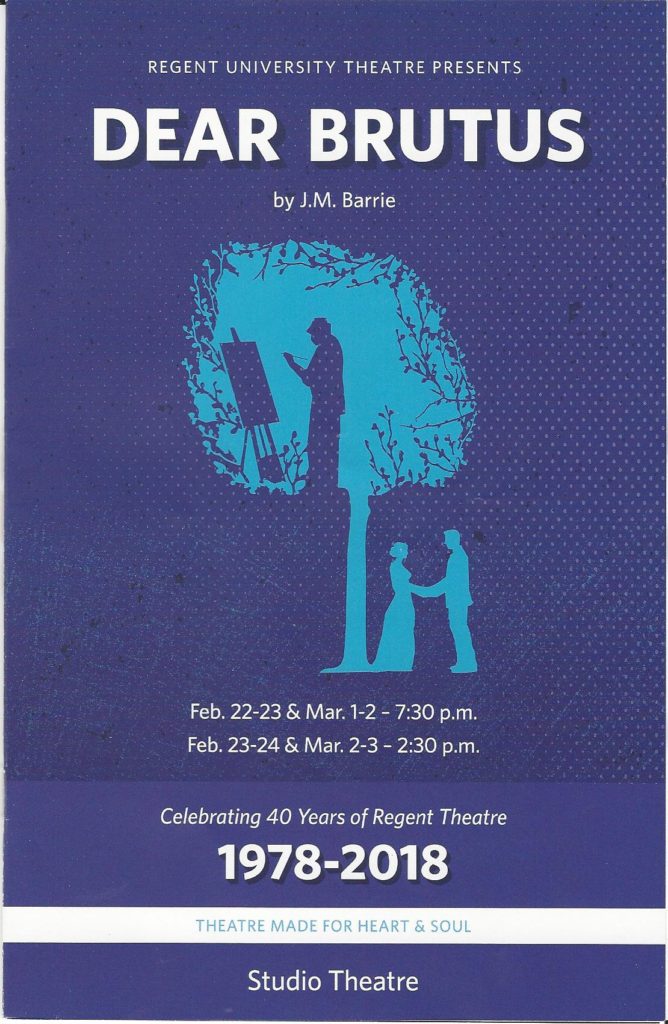 If you could live your life over again, would you do it the same way?

This question has probably crossed everyone’s mind at one time or another. The Christian Church proclaims that one has many chances through repentance to enter the process of theosis. It certainly crossed the mind of Peter Pan’s author, the Scotsman  J. M. Barrie (1860-1937).

Taking his title from Cassius’ line in Shakespeare’s Julius Caesar,

Men at some time are masters of their fates:

The fault, dear Brutus, is not in our stars,

But in ourselves, that we are underlings.

Is it God’s will, fate, or genetics that cause a life to eventuate as it does, or is it rather a matter of human choice?

Barrie hopes his play will illuminate  this issue.

Based on an unpublished story called “The Second Chance,” Dear Brutus (1917) begins with the main characters voicing their confusion over why they have been invited to the house of the Barrie alter ego, the mysterious Mr. Lob, a  man alive since the time of Queen Elizabeth I. Lob resembles, in manner and demeanor, a World War I era Puck of Shakespeare’s A Midsummer Night’s Dream. In fact, the time of the action is Midsummer Night’s Eve, a celebration marking the longest day of summer, supposedly a time when the wall between the spirit world and the human world is most porous. In his stage directions, Barrie sets the cosmic action of the play as that of the Light against the Dark, the darkness of illusion and self-delusion, and the light of self-knowledge and understanding.

Lob’s butler, Matey, attends to the assembled guests. Mr. Purdie is obsessed with women other than his wife, namely Joanna. The disdainful Lady Caroline is as uppity as the sweet Mr. Coade, “Coady,” is devoted to his elderly wife. The decaying childless marriage of the hard-drinking Mr. Will Dearth and his fierce smoldering former model, now his wife, Alice, crumbles before our eyes. The cuddly newlyweds John and Mabel Purdie present a striking contrast to the Dearths. Joanna Trout is in love with Mabel’s husband, however. Gradually the characters realize that they have been invited because they all wish they had done things differently in life.  After a second act trip through the magical woods, the characters reveal the significant epiphanies their evening has brought them.

Barrie asks: Can these characters, and in essence, can we in the audience, undo the past if given another chance? Barrie suggests that, no matter how many chances we are given, the challenge of altering ourselves is beyond us.

The opportunity to see a production of this historically important Barrie play is very rare indeed. Since the play’s premiere there have been few companies brave enough to enter the whimsical Barrie Land of Second Chances.

Directed by and starring Gerald du Maurier (1973-1934), the original Captain Hook, as Will Dearth, the play opened at London’s Wyndham’s Theatre, which du Maurier managed, in October 1917. The London Times enthused,

“What luck to get a Barrie play quite clear of the war, the actual, and wholly within his proper field of tender fantasy, Dear Brutus might have been called Dear Barrie. [i]

While watching the first production of Dear Brutus, future stage director  Sir Tyrone Guthrie (1900-1971), then seventeen, was inspired to enlist in the British Army while the opportunity still remained.

When the play came to New York City, the actor-manager-playwright William Gillette, the original stage Sherlock Holmes, directed  the play and starred as Mr. Dearth at New York’s Empire Theatre. The great British actor Louis Calvert (1859-1923), the original Andrew Undershaft in Shaw’s Major Barbara, crossed the Atlantic to play Matey. The charming young girl Margaret featured none other than eighteen-year-old Helen Hayes[ii], who was, according to The Times’ John Corbin, “a wonderful blending of dream beauty and girlish actuality”. Ms. Hayes herself said of her performance,

My youth, my own personal gifts were all that were necessary. I didn’t have to do a thing but go on and play. That’s all I was capable of at 18.[iii]

But as for the play, Corbin found “that the fabric wears thin at times and that the action at best is episodic. To those who judge by externals alone the play may well seem tenuous in its atmosphere and deficient in concentrated action. Yet all that is precious in Barrie is there; and the inner spirit of the whole is riper, richer, and deeper than ever before.”[iv]

In what must be one of the most bizarre explanations of a work of art by its author, Barrie wrote a letter for the Lowell Centenary Celebration in which he claimed that Dear Brutus was intended as a plea for a closer union between his country and America.

“The play of Dear Brutus is an allegory about a gentlemen called John Bull, who years ago missed the oppor­tunity of his life (like Bacon when he did not write Shakespeare). The Mr. Dearth of the play is really John Bull—as Mr. Gillette cunningly indicates by his figure.

“Margaret, the Might Have Been”, is really America. The play shows how on the fields of France, this father and daughter get a second opportunity of coming together; and the nightingale is George Washington asking them to do It on his birthday. Are the two now to make it up permanently, or forever drift apart? Second chances come to few, and as for a third chance, whoever heard of it? It is now or never; if it is now something will have been accomplished greater than the war itself: democracy will have sown its noblest seed, the fruit whereof America was created to give forth, that every child born into the world should have an equal chance.[v]

Regent University’s decision to stage Dear Brutus was a  good one. As one of the premiere graduate acting programs in the nation, the theater faculty offer first-rate training. Dear Brutus provides an excellent diagnostic evaluation of the young actors, while introducing them into some peculiar acting challenges, not the least of which is effective stage dialect and the mastery of playing in period costumes. The characters’ psychologies allow wise directors to nip in the bud young actors’ misconceptions about the nature of stage performance versus the presentation of self in everyday life.

They gave the finest performances of Barrie’s middle-aged characters possible for a group so young.

I would like to see this very same cast in thirty-five years, after the “slings and arrows of outrageous fortune” have transformed their minds, and hearts and souls into those of the middle aged. The sad but true fact is that middle age cannot be acted. It can only be revealed, automatically and reluctantly. Consequently, the middle-aged actor need only play the character and the middle-aged subtext, with the peculiar resonance only time and experience can provide, does the rest. The great director Elia Kazan points, out the truth about the “actors’ core”,

They can have all the training, all the techniques their teachers have taught them – p[private moments, improvisations, substitutions, associative memories – but if the precious material is not in them, the director cannot get it out[vi]

Young actors have barely got their first chance at life underway. Their hope, zest, and indefatigability cannot be completey muted to play the battered and bruised characters in Barrie’s play.

Eric Harrell has once again demonstrated his mastery of working with the arena stage. The actors almost constant movement from appropriate place to appropriate place seems effortless and natural, belying the difficulty Mr. Harrell’s great skill hides. He is blessed with the fanciful setting of Dave Foster, which condenses the two Barrie locations without losing anything of atmosphere, detail, or period. Jeff Brangan conjures up just the right kinds of lighting to highlight the play’s improbable probabilities, while Stephen Peppos’  whimsical Scottish music is perfect to set and carry the strange Barrie moods.

But the greatest production kudos must go to the costumes of C.J. Hill. Each costume is a gorgeous piece of late Edwardian art in its own right. The accessories and wigs are perfect, as well. The old actor adage, “Get your character from your costume” could easily apply here, so perfect are the costumes in capturing the essence of each character’s hopes and disappointments.

The occasion also featured the sad news that the Tidewater Stage, the region’s premiere theater company, will be taking a hiatus. The loss of this always-excellent company, for however long it may be, is a serious blow to the cultural life of Virginia.