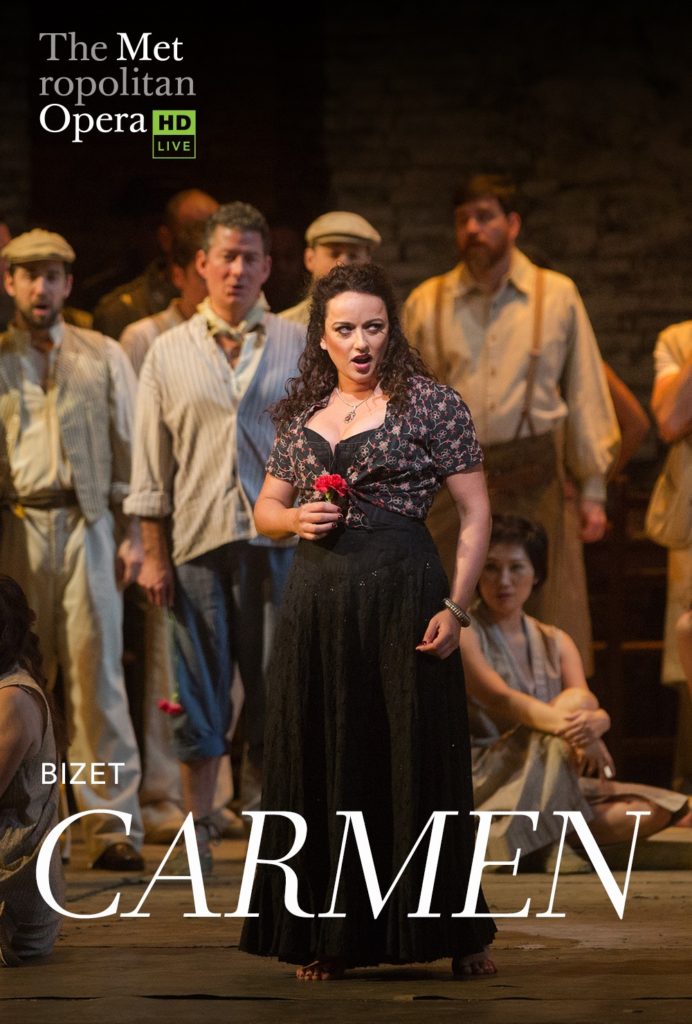 Each performance  is custom-made. Unlike film, when stage actors meet before a new audience anything is possible. As the playwright Herb Gardner noted,

There is a chance each time the curtain goes up of glory and disaster, the actors and the audience will take each other somewhere, neither knows where for sure.[i]

And that magical unpredictability has been especially true with performances of Bizet’s Carmen, as witnessed during the recent live world-wide broadcast.

The great stage character began her life in an insignificant novel:

I heard some bystanders say, ‘Here comes the gitanella!’ Then I lifted up my eyes, and I saw her! It was that very Carmen you know. She was wearing a very short skirt, below which her white silk stockings—with more than one hole in them—and her dainty red morocco shoes, fastened with flame-colored ribbons, were clearly seen. She had thrown her mantilla back, to show her shoulders, and a great bunch of acacia that was thrust into her chemise. She had another acacia blossom in the corner of her mouth, and she walked along, swaying her hips, like a filly from the Cordova stud farm. In my country anybody who had seen a woman dressed in that fashion would have crossed himself…She had an answer for each and all, with her hand on her hip, as bold as the thorough gipsy she was. …She, like all women and cats, who won’t come if you call them, and do come if you don’t call them, stopped short in front of me, and spoke to me.

With those words the world was introduced to Carmen, the woman Prosper Merimee’s obscure novel, made immoral by Georges Bizet, second only to La  Boheme among the world’s most popular operas.

Whereas Merimee has Carmen’s lover, Don Jose Lizzarrabengoa, an enlistee in the Almanza Cavalry Regiment tell the story, Bizet’s librettists, Henri Meilhac and Ludovic  Halvey try to present the tale objectively. The libretto and lyrics were by Henri Meilhac  (dialogue) and Ludovic Halevy (poetry and structure) . Halvey was also the cousin of Bizet’s wife.  Meilhac and Halvey were the hot writing duo of the day

They eliminated two earlier murders committed by Don Jose and all references to Carmen’s husband. But they also add Carmen’s pals Frasquita and Mercedes, and replace her picador lover Lucas, with the  matador Escamillo. And to pacify the theater owner, the innocent and chaste Micaela was added.  The result is a lively opera sometimes called  the female Don Giovanni. And like Don Giovanni, Carmen seems to have an infinite number of interpretations, even though, at first, it seemed that Carmen had died.

The opera’s March 1, 1875 debut at Paris’ Opera Comique seems to have been, in retrospect, doomed. The Opera Comique was the home  of middle-class entertainment where  happy endings ruled.

Director of Opera Comique, Adolphe de Leuven quit because Bizet refused to let Carmen live at the end. Stage director Camille Du Locle thought the  libretto vulgar and brutal, Carmen unsympathetic and immoral and fought with Bizet throughout rehearsals. Only Celestine Galli-Marie, the original Carmen, had faith in the work.

After the first night Bizet’s opera was deemed to be a resounding  failure. Critics found it too “Wagnerian”  because, unbelievably, there were not enough melodies!  In addition, everyone found the subject matter too shocking. Only Escamillo and Michaela were applauded because their characters most resembled those familiar to the Comique audience. Halvey summarized the audience’s response to Act 4 as “glacial”

Bizet became so depressed, that his chronic illnesses flared so that he was dead after three months.

After Bizet’s shocking death, the opera’s dialogue was made into recitatives by Ernest Guiraud for the Vienna production of 1883. A more sophisticated audience and musical dialogue created a phenomenal success. The production seen 20 times by Brahms. Wagner said of it, “Thank God – at last someone with an idea in his head for a change.”

The first Carmen, Celestine  Galli -Marie (1840-1905), along with Merimee’s description, set the traditional interpretation by revealing the kind of woman Bizet envisioned. Paul de Saint Victor wrote of Calli-Marie’s performance in his Soubies’ 44, “She is small and alluring, moves like a cat with an expression at once rebellious and full of mischief…There is something capricious, impudent about her.” She was also insistent. She made Bizet rewrite her opening aria thriteen times before she was satisfied. Her last performance of Carmen in Paris was in 1890 at age 50.

London saw its first Carmen in London on  June 22,1878. The American  Minnie Hauck introduced the role, and her new interpretation,  only after studying Merimee’s novel. She had never seen the opera on stage before playing Carmen. Hauck had first performed  Carmen in Brussels, where entrepreneur Henry Mapleson saw her and booked her into Her Majesty’s Theatre, London.

Mapleson took Hauck’s Carmen to New York where she introduced the opera on October 23, 1878 at New York’s Academy of Music. Hauck was, by then, an opera veteran. She had made her debut at age 14 as Amina in Bellini’s La Sonambula . By age 15 Hauck was playing Gounod’s Juliet, and had a repertoire of nine roles. Her co-stars – Campanini as Don Jose, Del Puente as Escamillo, Mme. Sinico as Michaela –did not want to do Bizet’s opera. Hauck convinced them to give it a try through rehearsal. Her dynamism kept them in rehearsal and through a triumphant international tour.

By bringing a new interpretation, Emma Calve ( 1858-1942)owned the role of Carmen after Minnie Hauck. Her interpretation was a theatrical event comparable in public response to the Canio in Pagliacci of Enrico Caruso a decade later. Her Carmen led Oscar Hammerstein’s Manhattan Opera Company to rival the Metropolitan Opera for New York dominance.

However, in 1914 Boston’s Geraldine Farrar (1882-1967) offered a  new Carmen which rocketed her into the world’s operatic spotlight. She  physically fought with her on-stage  Don Jose, Enrico Caruso. So electric was Farrar’s performance that she was the soprano offered the first film role of Carmen. In her autobiography Farrar leaves some advice for future Carmens:

When Carmen dashes onto the stage, her appearance alone must be so exciting and magnetic that every man will edge forward on his chair…She is frequently physical, so insouciante, careless and cruel in the natural pursuit of her quarry and subsequent gratification of her senses to satiety.[ii]

Throughout her career Farrar was dogged by her rival and nemesis Mary Garden (1874-1967)- who offered a Carmen of her own, beginning in Philadelphia in 1911. Famous for her physical characterizations, Garden insisted on using actual Spanish playing cards. She wore coral hoop earrings and a coral necklace which hung to her waist. Her black wig was adorned with a coral colored carnation. And like Farrar, Garden left advisory notes to those following her into the role:

Carmen is a proud gypsy men come to her – she goes to none – loose hips; walk with a little     loose balance in hips zigane – feel music in walk; never stiff. She never has to fuss over men and throw herself at them. She has class – proud Spanish gypsy. Carmen walks with high heels – it’s a quick heely walk – long steps – energy[iii]

Carmen changed again in 1949 when Walter Felsenstein’s production at the Komische Oper eliminated the recitatives and returned to the old spoken dialogue. However, it was not until 2004 that a complete score close to Bizet’s intentions was published.

Throughout its life, the opera has been the favorite opera of Queen Victoria, Otto von Bismarck, and  James Joyce. Nietzsche called it “a masterpiece.”

Sir Richard Eyre’s 2009 production brought all of the intelligence and dazzle which had characterized his term as Artistic Director of Britain’s Royal National Theatre. The magnetic Elina Garanca and the charismatic Roberto Alagna filled the stage with potent sexual fire and all of the passions sexual  lust could promise. Their stage chemistry was historic. The New York Times called Garanca’s Carmen “manipulative and hypersexual”. So overwhelming were the star performances that Christopher Wheeldon’s choreography, itself irrelevant to the ensuing action when compared to that of Rob Ashford,  seemed pale by comparison to what the principals delivered in the opera itself.

The February 2019 revival of Sir Richard Eyre’s Carmen, restaged by one of his original assistants, Paula Williams, took on a character which made it almost unrecognizable as the same Carmen which had featured Gransca and Alagna ten years earlier.

Alagna was still Alagna, but his Don Jose was now a much-travelled man of the world, ready to finally settle down with a beautiful young girl. Carmen entered the stage looking for a fight, with anyone, man or woman, it didn’t matter. As  presented by Clementine Margaine, Carmen was a mean tomboy intent on hurting or even killing whomever she chose. Ms. Margaine emphasized Carmen’s gypsy connection with the black arts, casting curses, and seeing fate in her every encounter. When she cursed Don Jose, for no apparent reason, she punctuated her intent by stabbing Don Jose with her read carnation. Having entered from beneath the ground, Margaine’s black dressed and barefooted Carmen, accompanied by “alluring” women dressed as denizens of Auschwitz, she seemed the Incarnation of Evil, on the hunt.

Surprisingly neither Mr. Alagna nor Ms. Magraine ever emotionally confirmed the love their words professed for one another. They seemed caught in a cursed Dance of Death, initiated by Carmen, whose enigmatic expressionless face seemed to be receiving instructions on what to do or say next from an unknown source. Alagna’s Don Jose only showed passion and love for his cross-wearing Micaela, the female incarnation of St. Michael the patron saint of soldiers.

The production of Carmen became a contemporary medieval morality play, as Micaela the passionate and loving Christian, fought for the soul of Don Jose as the bearer of Light and Life, while Carmen worked to destroy Don Jose, as the representative of Death and Darkness. In the final scene, Don Jose enters wearing an oversized cross, intent in offering Carmen and himself Christian salvation. He is foiled, but, climatically, manages to destroy  Carmen, the drama’s source, not of sexual delight and erotic passion, but of personal despair and spiritual suffering. Margaine’s Carmen was a precursor of the Lulu which would emerge from Wedekind’s pair of plays – The Earth Spirit (1895)and Pandora’s Box (1904) – into Alban Berg’s dark opera of 1937. In the words of Austrian writer  Karl Kraus, Lulu is the woman “who became the destroyer of all because everyone destroyed her”.

The modern medieval morality play frame  even employed the Escamillo of Alexander Vinogradov. Rather than a studly macho super hero, this Escamillo was a Dennis Kucinich look-alive, with all the swagger and zip of a country parson. Clearly this Carmen dumped Don Jose for this Escamillo, not because she found him more attractive sexually,  but because his selection would further drive Don Jose to distracted destruction.

Only when Aleksandra Kurzak’s Micaela was on stage did the stage come alive with joy and life. The love between her Micaela and  Alagna’s Don Jose stood as a beautiful emblem of a seemingly perfect love that was, tragically, not to be.

The musical proceedings were in the good hands of conductor Louis Langree, who led the musicians and singers with joy and majesty.

With Carmen, as with all live stage performances, what you get is, ultimately, unknown until you get it. Who would have guessed a morality play!