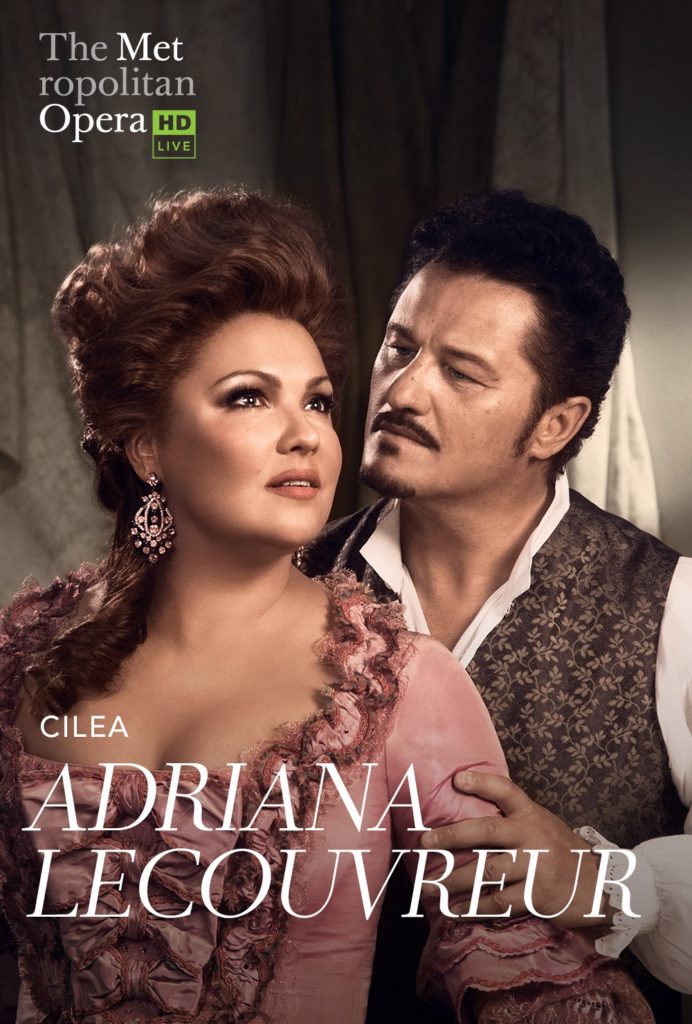 At the end of Francesco Cilea’s 1902 opera Adriana Lecouvreuer librettist Arturo Colautti adds a passage not found in the original 1849 play Adrienne Lecouvreur  by Eugene Scribe and Ernest Legouve.

As the great actress dies, Colautti presents her as hallucinating:

Stand aside, Philistines! I am Melpomene!

Behold the Light that leads me on,

That lifts me on high, first and last

The light of love…

Freed from sorrow I fly, I soar,

The reference to the Philistines could recall Athalie, the final tragedy by Jean Racine, a playwright  prominent in the stage career of Adrienne Lecouvreur. Athalie is a royal widow who is, in the end, like Adriana, executed by her rivals.

The reference to  Melpomene is even more striking. The daughter of Zeus and Mnemosyne,  Melpomenos is the singing goddess, one of the nine Muses, who became the very Muse of Tragedy to charm the souls of her listeners.

The stage Adrienne Lecouvreur, whether in the drama of Scribe or the opera of Cilea, has always dared the most potent actresses to work the magic of Melpomene.

The actual Adrienne Lecouvreur (1690–1730) started the phenomenon herself.

Born in the rural French town of Fismes, Adrienne was raised by an aunt who worked as a laundress washing the costumes of Le Grand, a tragedian of the Comedie Francais. Le Grand paid the aunt with theater tickets, and the aunt took Adrienne with her to  the theater from an early age. By the age of ten Adrienne was reciting long speeches from the plays she had seen. When Le Grand heard Adrienne, he  recognized the “grand spark” of Melpomene.

After touring the provinces as an actress,  Adrienne made her Paris debut at the age of 25. She drew instant attention with a simple and natural stage delivery which would, in time, come to replace the traditional sung intonation and declamation ruling the French Classical theatre. In addition, Adrienne was not considered beautiful; instead she possessed a hypnotic “spiritual” face. In time, Adrienne accomplished the extraordinary feat of making herself a place in the exclusive society of her day, at a time when the theatrical profession was held in such low esteem that the clergy refused its members Christian burial.

All the men of her day wanted to meet and court Adrienne. One day she met a man whom Thomas Carlyle would call “the favorite child of the Devil” – Maurice, Comte de Saxe, the illegitimate son of Auguste II, Elector of Saxony and King of Poland. The philosopher Henri Saint-Simon called him “one of those men born to produce the greatest love disasters.” And that is what he did with Adrienne Lecouvreur.

The actress’ biography rivals her stage incarnations for drama and tragedy. Maurice arrived in Paris three years after Adrienne. After wooing the women of Paris and getting as much money from them as he could, Maurice left for Courland where he hoped to win his royal position. Adrienne was his most famous victim. She gave him all of her cash and even sold her jewels to prove her love. While Maurice was away, Adrienne heard rumors that he was planning a marriage to the wealthy Comtesse de Flemming. However, Maurice  failed to marry the Comtesse, and failed to win a dukedom. He returned to Paris, and to Adrienne.

Seeing Maurice caused the young Duchess de Bouillon, married to a husband forty years her senior, to set her sights on the dashing Polish prince. The duchess went to the theater to insult her rival, Adrienne,  loudly, and to disparage her from her private box. Playing Racine’s Phedre at the time, Adrienne stepped out of the scene, and from the edge of the stage, spoke directly into the duchess’ eyes Phedre’s famous defiant lines:

Those shameless wantons, whose joy is treachery,

An icy face that never, never yields to shame?

Oh indiscreet one! What have you done?

The audience went wild as Adrienne’s knowing fans hissed the duchess from the theatre.

Later, exhausted after playing Voltaire’s Oedipe, she was carried to her home, once the home of Racine himself, in Rue des Marais St. Germain. A doctor was summoned along with Maurice. Her close friend Voltaire was on his knees by her bedside as she died. Her two sobbing daughters prayed in the next room. When a priest asked her to renounce the theatre so she could be buried in sacred ground,  Adrienne refused. Later that night her body was buried secretly in the ground of the forest of Faubourg St. Germain.

Adrienne Lecouvreur died, having been the first actress of any country to be received socially by the aristocrats of Europe. Rumors immediately arose that Adrienne had been poisoned by the Duchess de Bouillon, who had access to the poisons on which  her chemist husband had been working. Voltaire, the rationalist, eventually paid for an autopsy  to prove his friend had died of natural cause.

Nevertheless, Scribe and Cilea decided to “print the legend”, as the saying goes, rather than  the truth.

By 1820 Eugene Scribe was the most popular playwright in Paris. In 1849 the Theatre de la Republique asked him to  write a play for its great star Rachel  aka Elisabeth Felix, (1821-1858). Rachel, like Adrienne before her, had risen to fame by reviving the great classical roles, and playing them with subtlety and simplicity. Knowing Rachel’s most famous role to be Phedre, Scribe was drawn to the story of Adrienne Lecouvreur. To give himself the courage to tackle the project, Scribe asked the famous French women’s rights advocate Ernest Legouve to join him in the project.

But Rachel hated the play.

Only after her theater managers did everything they could to persuade her, would Rachel even give it a try. The play was an immediate triumph, and became the signature role for every age’s reigning stage diva from Sarah Bernhardt (1844-1923) in her own adaptation to Helen Modjeska (1840-1909) in an English version by H. Herman.

Francesco Cilea’s opera premiered in 1902. The great Angelica Pandolfini (1871-1959) played Adriana. Associated with the new verismo operas, and famous throughout Europe for her dying Mimi, Pandolfinia seemed the natural choice.

When  New York’s Metropolitan Opera first presented Adriana Lecouvreur in 1907 the gorgeous Lina Cavalieri was tapped to introduce Adriana Lecouvreur. Not noted for her voice, Ms. Cavalieri was instead famous for her extensive personal collection of jewelry and elegant costumes which she selected and wore for every performance. Her romantic counterpart was none other than the legendary Enrico Caruso (1873-1921).
The New York Times reviewer concluded that

Mr. Cilea does not disclose himself as the bearer of great musical ideas. He is fluent, often piquant, with his phrases, and he writes with facility for the orchestra, with variety of effect in delicate tinting, expressive up to a certain point, but rarely reaching strength or richness.[i]

And, Anna Netrebko’s Adriana embraced Melpomene in her performance.

What does that mean?

It meant that Ms.  Netrebko, already famous for a total physicalization and commitment to her stage roles,  must do the extremely difficult task of overcoming the singing-actor’s dilemma, clearly stated by Conrad Osborne, that “the singing-actors’s basis for carrying out actions is not the same as the theatre actor’s…

[T]he singing actor operates within a field where interpretive choices the theater actor would regard as his essential creative property have already been assigned. The singing-actor’s ‘line readings’ are roughly in place in the text: melodic rise and fall, dynamic contour, rhythmic pulse and tempo, even details of accent or timbral shading, are specifically  and concretely present (not merely implied), and he is obligated to them in a way the theatre actor is not.[ii]”

And how did Ms. Netrebko do this? She exploited all possible expressive territories, especially the use of inflection and intonation. Her sustained tones, (especially one in the final act which had the audience gasping), colorations, and varying intensities allowed  her to explore an Adriana beyond words. She thereby made every moment of her singing part of her dramatic purpose. Ms. Netrebko created and mastered three distinct modes of vocal expression. First was the singing voice of Adriana herself. Second was the speaking voice of Adriana herself. Finally, Ms. Netrebko developed a stage diction for the actress, famous for bringing a realism to the stage, but a realism which would seem unfathomably odd to today’s ears. She succeeded wonderfully and seamlessly with each mode. Even the moments when Ms. Netrebko simply listened were made hypnotic by the dynamic inner life she had created and sustained throughout the three hour production.

Her performance was amplified by the presence of two other superstars. As in Aida, the great mezzo-soprano Anita Rachvelishvili played the woman who loses her man to Anna Netrebko, the cruel and devious Princess of Bouillon. At every moment Ms. Rachvelishvili’s powerful voice challenged the right of Ms. Netrebko to exist in her presence. And if, as they say, looks could kill, the looks thrown by Ms. Rachvelishvili’s Princess would have decimated all on the Metropolitan’s stage. The object of the sopranos’ struggle was no less than the handsome and magnificently-voiced Polish tenor Piotr Beczala, who brought a nationalist’s pride to the role of the historic Polish Prince Maurizio.

Ambrogio Maestri’s Michonnet paid great tribute to the over-worked and under-appreciated stage managers throughout the world. His dominating voice was a perfect counterpart to his character’s ability to master the thousands of production details and performer personality quirks which constitute the life of the theater’s air traffic controller.

The stage direction of Adriana Lecouvreur was in the most capable hands of Sir David McVicar, perhaps the finest stage director working today. Sir David values the composer and librettist’s work above all else. Every production choice he makes serves those realities. In addition, Mc Vicar does not impose himself on the singers. Rather, he works to aid them to  realize their interpretations within the world of the composer. Adriana Lecouvreur was my sixth Mc Vicar production, having seen both La Clemenza di tito and Wozzeck at Chicago’s Lyric Opera and Norma, Tosca, and Il Trovatore at the Met. Adriana Lecouvreur may be Sir David’s most successful production yet.

Conductor Gianandrea Noseda found an intelligent and passionate way into the opera, and a zest appropriate to the complex theatrical backstage story. In addition, he displayed a focused sensitivity to the onstage singers’ moment-by-moment needs.

The production’s setting and costumes  were indispensable to its power. Charles Edwards designed a stage complex within the Met stage which reinforced the operatic  metaphor of a world composed of endless layers of play-acting and deceit. Brigitte Reiffenstuels’s elegant and expensive looking costumes captured the times and the characters. Setting and costumes were beautifully reconciled and integrated by the lighting of Adam Silverman whose design gave full due to the historic lighting of the time within a contemporary lighting frame.

The only wrinkle in an otherwise smooth production was the choreography of Andrew George. Thematically the Judgement of Paris, a famous ballet beginning in the 18th century, is a perfect fit for the action of the Opera. Paris’s choice of the most desirable woman began the Trojan War and the text warns to beware of gifts and the giver. Maurizio’s choice of Adriana over the Princess sets off a war which the princess wins through a deceptive gift. Unfortunately, Mr. George passed on any attempt to connect the dance section with the larger action of the opera. Instead he presented a cheap burlesque of the period’s dance punctuated by an occasional hipsterish wink and a nod to the audience.