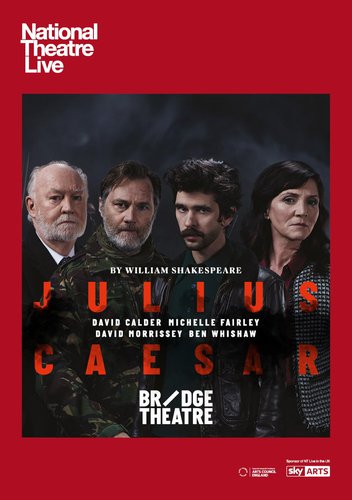 Julius Caesar opened Shakespeare’s new Globe Theatre in 1599. Having completed his history cycle, Shakespeare turned to a political drama set in the ancient past. History was fertile ground through which to make  political points about the issues of the day.

Julius Caesar was to Rome as Elizabeth I was to England – an aging and ailing monarch, without heir, whose term was fostering discussions of succession. How would the succession happen? Who would succeed? How might a civil war between rival factions be avoided?

In Elizabethan England, as in the Rome of Julius Caesar, the threat of civil war was one of the country’s greatest fears. Consequently, the circumstances of Caesar’s death, and the ensuring chaos, had direct bearing on English audience’s concerns.

Social and political insights might be found in the life and death of Julius Caesar.

Assassination had been a normal means of changing leaders up though the time of St. Paul. However, his letter to the Romans living under the brutal reign of Nero struck another tone:

Let every soul be subject unto the higher powers. For there is no power but of God: the powers that be are ordained of God. Whosoever therefore resisteth the power, resisteth the ordinance of God: and they that resist shall receive to themselves damnation. For rulers are not a terror to good works, but to the evil. Wilt thou then not be afraid of the power? do that which is good, and thou shalt have praise of the same: For he is the minister of God to thee for good. But if thou do that which is evil, be afraid; for he beareth not the sword in vain: for he is the minister of God, a revenger to execute wrath upon him that doeth evil.[i]

it was not for the subversion of the commonwealth that Christ introduced His laws, but for the better ordering of it, and to teach men not to be taking up unnecessary and unprofitable wars. For the plots that are formed against us for the truth’s sake are sufficient and we have no need to be adding temptations superfluous and unprofitable.[i]

No matter how wicked a king or ruler might be, a Christian must obey the ruler, unless the ruler orders the Christian to disobey God. This counter-cultural attitude eventually prevailed, so that, by the time of Dante Alighieri (1265-1321), the characters of Rome’s history were well-known throughout the world and judged by Christian standards. In his Inferno the poet-political philosopher suggested that each of Lucifer’s mouths held a great sinner. For Dante, and thus for the civilized world, the three greatest sinners of all time all betrayed the greatest benefactors – Judas Iscariot betrayed Jesus Christ, and Brutus and Cassius betrayed Julius Caesar.

By crafting a contemporary play about Caesar, Brutus, and Cassius, Shakespeare was deliberately setting up an historic and dramatic parallelism – Judas was to Christ, as Brutus was to Caesar, and what any assassin would be to Queen Elizabeth.

To even contemplate the murder of the queen would, as it eventually does in Shakespeare’s play, cause both the natural and supernatural worlds to cry out in objection and plunge the world into bloody civil war.

Brutus must be seen as a traitor akin to Judas, and Mark Antony a valued disciple akin to Saint John.

Nevertheless, rebellion came to England. Robert Devereaux, the Earl of Essex, attempted one in 1601. Essex’s final scene could have come from Julius Caesar.

On the 25th of February 1601, at a little before 8am, Robert Devereux, 2nd Earl of Essex, was brought out to the scaffold on Tower Green. Historian Alison Weir writes of how “he acknowledged, with thankfulness to God, that he was justly spewed out of the realm” and then he continued, saying:

My sins are more in number than the hairs on my head. I have bestowed my youth in wantonness, lust and uncleanness; I have been puffed up with pride, vanity and love of this wicked world’s pleasures. For all which, I humbly beseech my Savior Christ to be a mediator to the eternal Majesty for my pardon, especially for this my last sin, this great, this bloody, this crying, this infectious sin, whereby so many for love of me have been drawn to offend God, to offend their sovereign, to offend the world. I beseech God to forgive it us, and to forgive it me – most wretched of all.

He then asked God to preserve the Queen’s life “whose death I protest I never meant, nor violence to her person”, asked the crowd to join with him in prayer and asked God to forgive his enemies. Essex then removed his gown and ruff and knelt at the block. He said the Lord’s prayer, forgave the executioner and then repeated the Creed after the clergyman. He rose, took off his doublet to reveal a scarlet waistcoat and readied himself on the block, again saying:

Lord, be merciful to Thy prostrate servant! Lord into Thy hands I commend my spirit.

Rebellion finally succeeded in England as the Glorious Revolution of 1688 deposed James II. But violent rebellion was in the air to stay.

In 1776 Americans rejected their English monarch’s rule. In 1789 Frenchmen executed their king and began a reign of terror. Nevertheless, bloody political rebellion acquired a new gloss, having freed itself from the stigma it had had since the time of Dante.

In fact, Shakespeare’s Julius Caesar became the favorite play of the new American republic. Brutus was no longer a traitor to God’s divine scheme of things. Rather Brutus was a republican patriot who simply could not control the winds of war and the unruly mob.

The republican interpretation reached its absurd peak in 1864 when the great American actor Edwin Booth gave a performance of Julius Caesar in New York with brother Junius Brutus as Cassius and Mark Antony played by brother. John Wilkes.

Five months later John Wilkes put the newly interpreted play’s ideas into action by assassinating President Lincoln. He made the connection to Shakespeare’s play directly with a letter to the editors of the National Intelligencer on 14 April 1865:

If the South is to be aided it must be done quickly. It may already be too late. When Caesar had conquered the enemies of Rome and the power that was his menaced the liberties of the people, Brutus arose and slew him. The stroke of his dagger was guided by his love of Rome. It was the spirit and ambition of Caesar that Brutus struck at.

“Oh that we could come by Caesar’s spirit,

And not dismember Caesar!

Caesar must bleed for it.”

I answer with Brutus:

He who loves his country better than gold or life.

One would think that the assassination of a president would end the republican interpretation of the play.

The John Wilkes Booth interpretation of Julius Caesar was revived by the great Orson Welles in 1937 for his Mercury Theatre as warnings about Fascist Italy and Nazi Germany. The character of Caesar appeared in a black belted uniform and gave a fascist salute. The actors wore modern street garb, moving easily about an unadorned stage. Stark, dramatic lighting shooting from unusual angles gave the production the feel of a “Leni” Riefenstahl documentary political pageant.

For generations Shakespeare’s Julius Caesar was the first play introduced to American school students. Many of the assassins’ speeches were assigned for memorization and examination.

Today, Romeo and Juliet has replaced Julius Caesar in the school curriculum. The play’s love and sex are easier sold to students than the complexities of Roman politics. Plus, the existence of a hip modern dress film of Romeo and Juliet, along with Bernstein’s West Side Story means that, if the teacher plays her cards right, she may avoid having to mention Shakespeare’s text for almost two months, as students watch the videos during class time.

Since Welles, productions of Julius Caesar which want “relevancy” and to express dissatisfaction with some current political opponent, make him the assassination target and his political rivals the heroic republicans. These productions have generally followed Welles’ model.

Consequently, during the age of “Resistance” and “Antifa”, any production of Julius Caesar means that assassination has been put into play as a legitimate tool of political action and discussion

A Caesar with yellow hair, or sporting a red “Make Rome Great Again” baseball cap would be as wrong-headed as an African-American Caesar surrounded by “Hope” posters in the style of Shepard Fairey.

But politics too often trumps Shakespeare for many directors. Horrifying perversions of Shakespeare’s play – cheap, wrong-headed, and disrespectful of both Shakespeare’s achievement and the theater audience – appear on our stages.

Which brings us to the National Theatre’s presentation of Nicholas Hynter’s Julius Caesar, originally staged for the Bridge Theatre.

If not so ill-conceived at heart, the production would be a wondrous achievement. The means of production – actors, scenery, costumes, music, properties, lighting, and direction cannot be surpassed for dynamic theatricalism.

Michelle Fairley’s Cassius is so perfectly cast and portrayed as to show the merits of intelligent and imaginative cross-gender casting. Every adjective used to describe Cassius suits her to a tee and she adds a hideous contemporary blend of self-righteous smugness and political urgency. She is well matched with Ben Wishaw’s Brutus, played as a bookish theorist spurred to action by unfortunate possibilities rather than pressing realities. We have all endured this Brutus’ pontifications on too many television political roundtables. David Calder’s Julius Caesar seems as menacing as an amiable retired car salesman, no threat to anyone, let alone to an empire. His wingman, Mark Antony, is conceived of as a man looking to save his own hide following Caesar’s death, rather than as a true Caesarite working to undermine the conspiracy with clever oratory. All of the conspirators give fresh and valid interpretations to their roles. Only the wives – Wendy Kweh’s Calpurnia and Leaphia Darko’s Portia – raise more questions about their backstories than they illuminate.

The production looks so good that it might cause English teachers to consider, if only briefly, abandoning their Romeo and Juliet syllabi to return to Julius Caesar, now that a good film version exists to spare them dealing with the written text.

[2]The Homilies of St. John Chrysostom NICENE AND POST-NICENE FATHERS OF THE CHRISTIAN CHURCH, edited by Philip Schaff