CHRISTMAS ON THE AIR: A Christmas Gift to Chicago 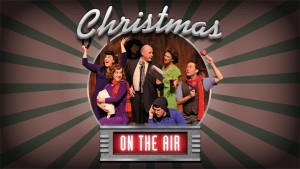 The Christmas season is a gift to performing artists. People want entertainment at Christmas and are willing to leave the comfort of their homes to find it. Dozens of different types of performances are scheduled, employing hundreds, if not thousands, of artists. Many performers depend upon Christmas to keep them going through the year.

As a result, the average audience member looking for a night out is faced with a daunting array from which to choose. Familiar titles like A Christmas Carol and The Nutcracker compete with hopeful newcomers, many making the trip from screen to stage, like A Wonderful Life, White Christmas, and Elf.

So what does a wonderfully unique, and winsome new Christmas musical play need to do to get some attention amid a seasonal barrage of holiday marketing?

If you know, please call the Provision Theater immediately (312-455-0066), because if there was ever a new play which deserved to become a Christmas classic for Chicagoans, it is the currently running Christmas On the Air.

Here are the reasons:

The story is unique to Chicago. The play is a live Christmas Eve 1949 radio program of WCAO, broadcasting from the gymnasium and education center of Chicago’s 13th Presbyterian Church on Michigan Avenue and Balbo Street. The broadcast is loaded (thanks to the custom adaptation by playwright Lucia Frgione) with actual Chicago place references, store advertisements, business promotions, sports and weather reports, slang, songs, and harmonies of the actual date in 1949. The station is the Frank family business – P.B. Frank (Tom McElroy), the paterfamilias, a former war correspondent, his grand dame immigrant wife Yolanda (Laurie Empen), and their sometimes too eager son Danny, “The Kid” (Patrick Tierney).Other employees include Kitty McNally (Elizabeth Telford), the Debbie Reynoldsesque ingénue, Silvia White (Veronica Garza), the Texas songstress and cooking expert, and a demure stage manager pianist (Jordan Taylor).

The Provision audience becomes the actual studio audience, subject to free snacks, a raffle *, and cue card promptings. Thus, every performance is custom made, as the actors freely and expertly adapt to whatever comes, or doesn’t come, their way.

The play is in a tried and true favorite audience form: A show about putting on a show, like the classics White Christmas, Singing in the Rain, and a Midsummer Night’s Dream. The audience sees two levels of reality coexisting in tension and often delightfully colliding.

The performers are called upon to run the gamut of styles. Miss Fragione’s text is a pastiche of Saturday Night Live-type sketches, sentimental poetry, musical comedy, and Chekhovian family drama. Navigating seamlessly and successfully among the disparate styles requires the most accomplished of performers, and the Provision Theater has them. Tom McElroy brings gravitas to the P.B. Frank proceedings without becoming a radio Ted Baxter. His painful secret animates his relationships and provides the emotional foundation for the ensuing action. Laurie Empen embodies Old World grandeur caught in New World triviality, all the while sharing her husband’s wartime secret. Patrick Tierney plays the kind of role Mickey Rooney made famous, but with a wicked pinch of Dana Carvey thrown in for good measure. Like Mickey, he sings wonderfully with his sweetheart, played by Elizabeth Telford with Judy Garland panache and tragic heart. Veronica Garza presents a Texas war widow alone at her job at Christmas, hiding her pain under layers of Paula Dean bluff. Miss Telford and Miss Empen join Miss Garza to create very nice close harmonies in an Andrews Sisters style trio. All of the period music is handled masterfully under the careful direction of Elliott Delman.

The look and sound of the play captures the essence of 1949 Chicago and radio. Carl Ulaszek’s simple gymnasium with side areas allows the attention to focus of the action, as Chazz Malott’s fluid lighting directs the audience’s attention and mood. Likewise the sound design of David Pierczynski maintains the time period and appropriate mood both behind the action and in the fore when needed. The period radio sound effects are a treat in and of themselves. Michelle Dassinger’s costumes are spot on accurate for the time, although the nylon stockings of the time had seams. ** Mary O’Dowd’s properties and set dressings continue what seems to be a hallmark of the Provision Theater – stunningly accurate and metaphorically expansive properties. It is wonderful to see the art of stage properties taken so seriously and accomplished so successfully.

Finally, the success of this three-ring circus of a Christmas extravaganza must lie with director Timothy Gregory. From finding the script, guiding the playwright through an amazing translation of her script to embody 1949 Chicago, to assisting his actors travel between often conflicting styles in sometimes breathtakingly short periods of time, to playing on the audience’s emotions as if a maestro with a grand Wurlitzer, Mr. Gregory displays one of the broadest and deepest  fluencies in theatrical powers and effects imaginable.

Christmas can be a hard time for many people. The season can irritate emotional scars and underscore broken relationships. The characters in Christmas On the Air share those difficulties. But their show soldiers on, despite the storm, and the loss of light. Each character signs off with the possibility of living the lyrics of a then relatively new song,

Have Yourself a Merry Little Christmas,

Let your heart be light
From now on,
our troubles will be out of sight

Have yourself a merry little Christmas,
Make the Yule-tide gay,
From now on,
our troubles will be miles away.

Here we are as in olden days,
Happy golden days of yore.
Faithful friends who are dear to us
Gather near to us once more.

Through the years
We all will be together,
If the Fates allow
Hang a shining star upon the highest bough.
And have yourself A merry little Christmas now.

If you like this song, then you should get yourself to the Provision Theater’s Christmas On the Air.

*FULL DISCLOSURE: On the night I attended I won the raffle – a ten pound fruit cake – but I “re-gifted” it back to the theater before I left the building.

**Black eyebrow pencil was used by ladies at the time to create a seamed look on bare legs.