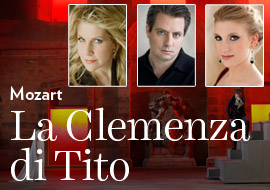 Our first visit to the Lyric Opera at the Civic Opera House since coming to Chicago was to see Mozart’s last Opera La Clamenza di tuti. The Civic Opera House is magnificent. Built in 1929, it’s art deco styling is one of the most glorious theater interiors I’ve seen. Legend has it that this theater inspired Orson Welles’ Citizen Kane to build an opera house for his wife.

Historian David Bush, the fellow who twenty years ago “discovered” an unknown Mozart opera gave the pre-show talk. I am ashamed to admit that I knew nothing of this opera. But then, most people don’t, since it wasn’t produced in America until 1952.

The main draw for us was Chicago’s international opera star- Matthew Polenzani, who did not disappoint in a rather lackluster role. (How much passionate change can one muster when one’s overriding desire is to forgive everyone at all times?) The other leading male roles were filled wonderfully by women (since no castrati are available) – Joyce DiDonato and Cecelia Hall, and Amanda Majeski was appropriately overwrought as the evil Vitellia.. (In my musical ignorance I wonder why the roles couldn’t be transposed for male voices and singers. The male impersonators were fine as far as that is possible, but the possibility doesn’t go far enough, in my opinion.) The chorus was glorious, in a word. As were Sir David McVicar’s sets and stage direction, set in Napoleonic France, with Roman military tunics for the troops. His final pantomimic dramatization had Titus prepare himself to be killed there and then by the troops. He folded his long red cape and if a redemptive offering, as the conspirators fled. The swords were drawn and the lights dimmed. This added staging underlined the character as a type of Christ, appropriate for the season. Titus’ great love forgives all sins, causing everyone to repent. He offers his own life, in McVicar’s interpretation, in the place of the others. If there was one weak element it was Titus’ white clothing in a black and grey world- better in theory than in execution. The color simply emphasized the actor’s physical rather than his spiritual size.