IRISH THEATRE OF CHICAGO: MOLLY SWEENEY – HAVING EYES BUT NOT SEEING 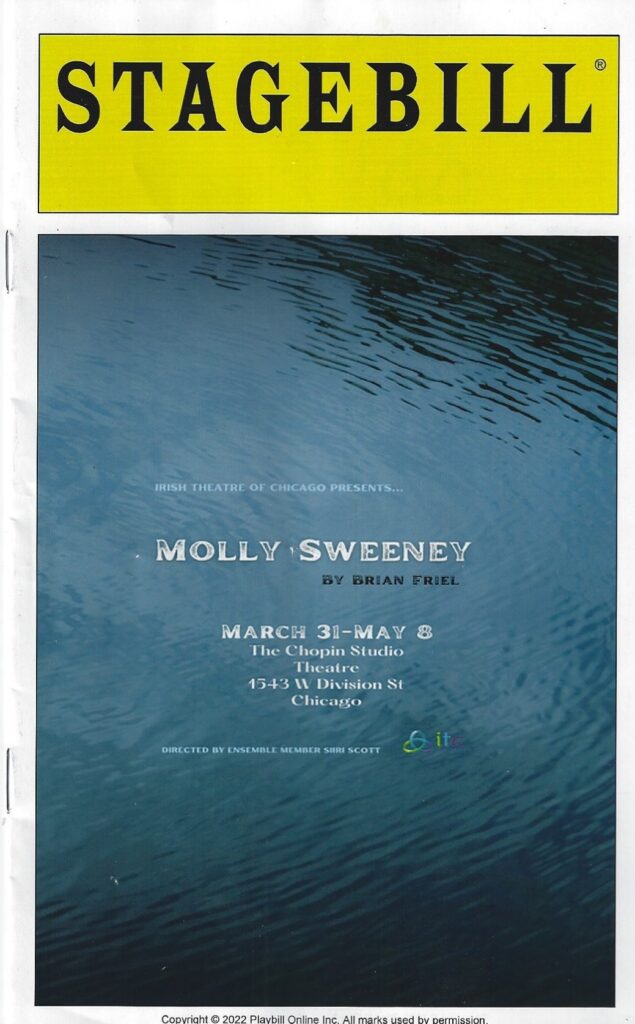 Molly Sweeney (1994), presented by the Irish Theatre of Chicago at the Chopin Theatre, is the second of two plays (the other is The Faith Healer (1979),  in which the great Irish playwright Brian Friel (1929-2015) explores the subjects of religion and science, faith and disappointment, and seeing and understanding. Healing is the topic of each. Though written fifteen years apart, the plays reveal enough thematic and structural similarities to be considered together. Dialogue is absent in both plays and that absence may be the key to understanding the plays’ ideas.

In The Faith Healer, Frank Hardy is a would-be healer touring a Great Britain with few “relics” of the old Christian faith. Frank is not a Christian healer, like Elmer Gantry. His “gift” is unattributed, so he seems to be in the same category as Simon Magus, the sorcerer who, according to the Book of Acts, tried to purchase the secrets of healing from the apostles. Frank’s success rate is hit or miss, though he claims to know ahead of time if healing will occur.

Frank’s manager, Teddy, introduces the “act” with the paradoxical theme song, Jerome Kern’s “The Way You Look Tonight.” Frank’s only friend is his lover/wife, the former barrister, Grace. The trio of Frank, Teddy, and Grace head to their home of Ireland “to recharge, even restore” Frank,  because he “seemed to have lost touch with his gift.”

Along the way, Frank heals ten people at once, even a polio victim. Friel deliberately makes the number ten to suggest a comparison with Jesus, who  healed ten lepers, of whom only the Samaritan returned to thank him. Frank’s last attempt at healing a wheelchair-bound friend of some drunken wedding guests resulted in his murder by the angry mob. At his end, Frank achieves a disorientation very similar to that of Molly Sweeney at the end of her life. He says:

“the whole corporeal world [had] somehow shed their physical reality and had become mere imaginings…[W]e had ceased to be physical and existed only in spirit, only in the need we had for each other.”[i]

Similarly, Molly describes her final state as in “a borderline country.

It’s where I live now. I’m at home there. Well…at ease there. It certainly doesn’t worry me anymore that what I think  see may be fantasy or indeed what I take to be imagined may very well be real external reality. Real – imagined – fact – fiction – fantasy -reality – there it seems to be. And it seems to be all right.”[ii]

The Irish Theatre  of Chicago’s spellbinding performance  continues that group’s tradition of providing the finest of theater artists in the finest of Irish plays.

Carolyn Kruse’s Molly is a delightful, selfless woman enjoying life to its fullest. Though the character has been almost totally blind, physically sightless, since birth, she hasn’t a cross word for anyone. She has found joy and meaning in her limited life. The actress actually seems sightless, so convincing is her portrayal

Molly has attracted Frank Sweeney as a suitor. As played by Matthew Isler, Frank is a real charmer. Blessed with the gift of gab, and the autodidact’s enthusiasms for all sorts of quirky aspects of life, he truly does love  Molly. There is never any question of his devotion to her, even as he struggles with caring for her while pursuing his own “passions”.

Finally, Robert Kauzlaric presents the best possible case for the careerist Dr. Rice. At times we can almost sympathize with his plight as a desperate man without wife, children and career. He is gambling the little he has has left on healing a blind woman, a very, very rare occurrence . The three actors create a reality larger than themselves. Indeed, they somehow fill the stage and the audience’s imagination with the world of Ballybeg Ireland.

Molly Sweeney is the opposite of Friel’s faith healer Frank Hardy. She is the one to be healed. Each character in both plays speaks only in monologues and exists outside of any particular time or space. The plays’  commonalities suggest the absence of any fundamental difference between the healer and the would-be healed.

Some auditors see Molly Sweeney as the story of a woman destroyed  by “patriarchal interference.” Others see Molly as the Irish Everywoman, the representation of Ireland in female form.

But Friel, his own eyesight failing, found impetus to tell his story after reading an article by the eminent neurologist Oliver Sacks (1933-2015). The article, “To See and Not to See”, appeared in the May 1993 issue of the New Yorker Magazine. Friel transposed the characteristics and situation of Sacks’ actual patient “Virgil” to his fictional character, Molly.

However, a playwright as accomplished as Friel didn’t write a play simply to share a fascinating story with his audience. Playwrights work with dramatic metaphors, not with scientific cases.

So what is the play Molly Sweeney all about, anyway?

Molly’s husband, Frank, is a fellow who flits from one enthusiasm to another – bee-keeping, whales, Iranian goats. His hobby is finding causes. Fixing his wife’s eyesight is his latest and greatest cause. Dr. Rice, Molly’s ophthalmologist, owns  both a failed marriage and failed professional career. He has been reduced from world-class status to a local practitioner in the backwater known as Ballybeg.

Molly represents a chance for these two men to restore or, at least, increase their  self-esteem. Doing good can often hide selfish ambition. The old term “vainglory”  seems to characterize what the men are actually engaged in, disguised as selfless compassion.

All three characters seek to escape their unpleasant realities. Molly, though the most contented  character at the play’s beginning, suffers most at the play’s end. For Dr. Rice and Frank, Molly is simply another case of things not working out as they had hoped. And so they move on.

Molly can’t move on. She can’t even go back to the way she was before they tried to “help” her.

Her husband and her doctor have used her, just as the faith healer, Frank Hardy, used his customers.

The Bible repeatedly rails against those who have eyes but do not see. “Seeing” for Christ involves more than noting the sensory condition of the material world. True seeing involves the nous, the human heart’s source of wisdom, as it glimpses part of the great mystery of  existence. Nous refers to an aspect of human perception that has been seriously neglected in our modern experience. However, one cannot read anything in the spiritual writings of the ancient church fathers without encountering this concept over and over. The nous may take over when our willed perception proves ineffective. As Father Stephen Freeman notes,

Humility is the fuel which activates the nous. And humility is in short supply in the worlds created by Frank Hardy and inhabited by Molly Sweeney.  Each character  is made of monologues. Dialogue, the vehicle required to connect with others, is always absent. Consequently, communion can not occur. Participation requires engagement with the other, not solitary reflection.

In Puccini’s great opera La Boheme, Rodolfo, the struggling playwright, asserts that art, at its best, teaches us how to love. Brian Friel’s Molly Sweeney follows that dictum. Faced with overwhelming hubris and vainglory from the two men in her life, Molly struggles to love with joy. Hers is an example of love in spite of all. Nevertheless her small grip on happiness finally crumbles through Frank’s and Rice’s onslaught of so-called help.. Paradoxically, Friel also shows us, through her husband and doctor,  how NOT to love. 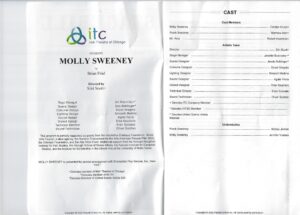 Like Loading...
May 1, 2022 – 4:55 pm | By Paul Kuritz | Posted in Acting, Current Events, from Paul, History, Men and Women, Quotations, Science, The Gospel of the Kingdom, Theater, Theology | Comments Off on IRISH THEATRE OF CHICAGO: MOLLY SWEENEY – HAVING EYES BUT NOT SEEING