MUTI AND THE CSO RETURN 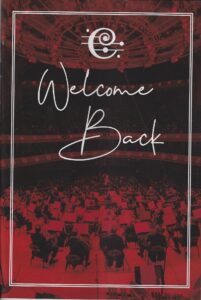 Classical music organizations have always looked for ways to expand their repertoire beyond the tried-and-true canon. New symphonies and operas have been commissioned almost from the beginning of the group’s founding. The problem is that the new works have a short life span; few, if any, ever have a life beyond their premiere.

Artistic directors have also scoured the works of the past, looking for neglected or forgotten gems which might, when revived, find the audience they never had when new. For example, JoAnn Falletta, conductor of the Virginia and Buffalo Symphonies, has resurrected the work of Florent Schmitt (1870-1958), including his Antony and Cleopatra, choral music like his Psalm 47, and various ballet suites and other orchestral music.

Conductor and violinist John McLaughlin Williams has been championing a group of neo-Romantic American composers from the first half of the twentieth century, including Nicolas Flagello, Arnold Rosner, George Frederick McKay, and Henry Kimball Hadley, as he reported to Heather Macdonald in the Summer 2021 issue of City Journal.

In his first concert of the 2021-2022, the dean of maestros, Riccardo Muti, selected pieces for performance united by the theme of endurance and triumph. The theme seemed appropriate following eighteen months of disease and violence. Muti seemed to want us to reflect on the enduring quality of music and music’s ability to bring us through catastrophic times.

The maestro introduced his Chicago Symphony Orchestra audience to two unfamiliar composers, whose music, despite all odds, has survived to triumph in Symphony Hall. First, to Joseph Boulogne, Chevalier de Saint-Georges (1745-1799)  a contemporary of Mozart. Boulogne was also a virtuoso violinist, conductor, and champion fencer, who often performed for the court of Louis XIV. The Overture to L’Amant anonyme was a beautiful and sparkling way to shake off the past eighteen months’ anxiety and fear.

The second work, was by Florence Price (1887-1953), an Arkansan transplanted to Chicago. In 1933 the Chicago Symphony Orchestra performed her prize-winning Symphony in E Minor. Her Andante moderato was pure Americana, akin to the best of Stephen  Foster, Aaron Copeland, George Gershwin, Fanny Crosby, and the MGM films of the mid-twentieth century. My astute spouse said the music reminded her of the work of the American playwright, Horton Foote. And she is spot on the money: Had Horton Foote been a classical music composer, he would have produced the work of Florence Price. Free from any traces of Modernism, the Price piece served to whet the audience’s appetite for Muti’s presentation of Price’s Third Symphony in May.

The Boulogne piece would fall into the general category of what Bernard Shaw, working then as a music  critic, would call “dance music. Shaw used the term “dance music’ to establish Beethoven’s historical significance with his Eroica Symphony, the ultimate musical expression of heroic endurance and triumph:

The music of the eighteenth century is all dance music. A dance is a symmetrical pattern of steps that are pleasant to move to; and its music is a symmetrical pattern of sound that is pleasant to listen to even when you are not dancing to it. Consequently the sound patterns, though they begin by being as simple as chessboards, get lengthened and elaborated and enriched with harmonies until they are more like Persian carpets; and the composers who design these patterns no longer expect people to dance to them. Only a whirling Dervish could dance a Mozart symphony: indeed, I have reduced two young and practiced dancers to exhaustion by making them dance a Mozart overture. The very names of the dances are dropped: instead of suites consisting of sarabands, pavanes, gavottes, and jigs, the designs are presented as sonatas and symphonies consisting of sections called simply movements and labelled according to their speed (in Italian) as allegros, adagios, scherzos, and prestos. But all the time, from Bach’s preludes to Mozart’s Jupiter Symphony, the music makes a symmetrical sound pattern, and gives us the dancer’s pleasure always as the form and foundation of the piece.” [i]

The power of Beethoven is greatest when contrasted with dance music.

“Music, however, can do more than make beautiful sound patterns. It can express emotions. You can look at a Persian carpet and listen to a Bach prelude with a delicious admiration that goes no further than itself; but you cannot listen to the overture to Don Giovanni without being thrown into a complicated mood which prepares you for a tragedy of some terrible doom overshadowing an exquisite but Satanic gaiety. If you listen to the last movement of Mozart’s Jupiter Symphony, you hear that it is as much a riotous cobrobbery as the last movement of Beethoven’s Seventh Symphony: it is an orgy of ranting drumming tow-row-row, made poignant by an opening strain of strange and painful beauty which is woven through the pattern all through. And yet the movement is a masterpiece of pattern designing all the time.

Now what Beethoven did, and what made some of his greatest contemporaries give him up as a madman with lucid intervals of clowning and bad taste, was that he used music altogether as a means of expressing moods, and completely threw over pattern designing as an end in itself. It is true that he used the old patterns all his life with dogged conservatism (another Sansculotte characteristic, by the way); but he imposed on them such an overwhelming charge of human energy and passion, including that highest passion which accompanies thought, and reduces the passion of the physical appetites to mere animalism, that he not only played Old Harry with their symmetry but often made it impossible to notice that there was any pattern at all beneath the storm of emotion. The Eroica Symphony begins by a pattern (borrowed from an overture which Mozart wrote when he was a boy), followed by a couple more very pretty patterns; but they are tremendously energized, and in the middle of the movement the patterns are torn up savagely; and Beethoven, from the point of view of the mere pattern musician, goes raving mad, hurling out terrible chords in which all the notes of the scale are sounded simultaneously, just because he feels like that, and wants you to feel like it.

And there you have the whole secret of Beethoven. He could design patterns with the best of them; he could write music whose beauty will last you all your life; he could take the driest sticks of themes and work them up so interestingly that you find something new in them at the hundredth hearing: in short, you can say of him all that you can say of the greatest pattern composers; but his diagnostic, the thing that marks him out from all the others, is his disturbing quality, his power of unsettling us and imposing his giant moods on us. Berlioz was very angry with an old French composer who expressed the discomfort Beethoven gave him by saying “J’aime la musique qui me berce,” “I like music that lulls me.” Beethoven’s is music that wakes you up; and the one mood in which you shrink from it is the mood in which you want to be let alone.

When you understand this you will advance beyond the eighteenth century and the old-fashioned dance band (jazz, by the way, is the old dance band Beethovenized), and understand not only Beethoven’s music, but what is deepest in post-Beethoven music as well.”[ii]