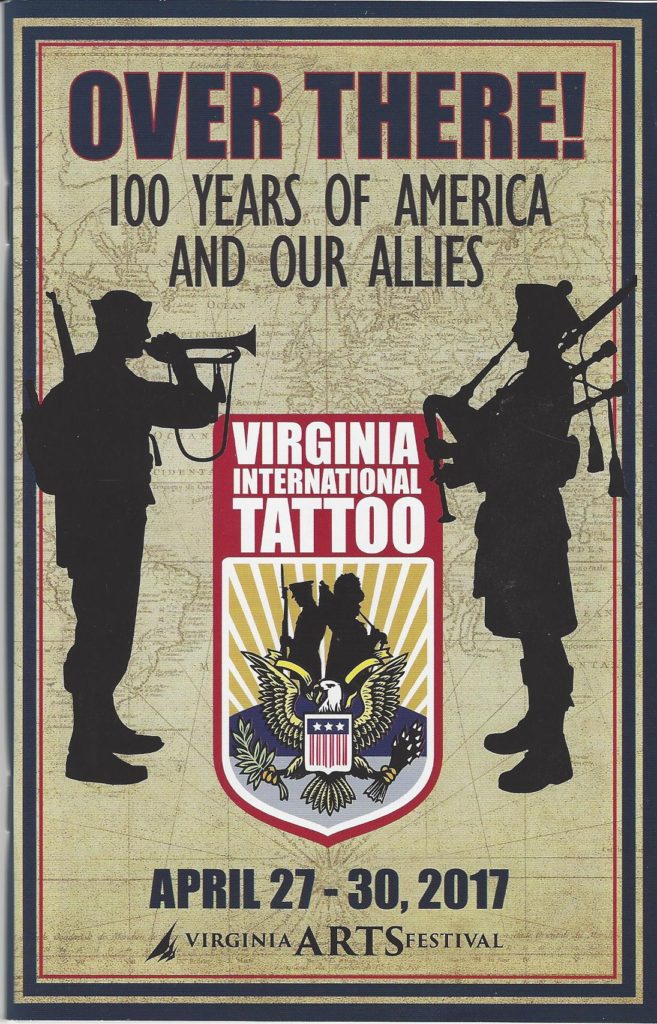 No, not that kind of tattoo!

I mean the kind of tattoo I didn’t even know existed until a few weeks ago.

The tattoo I mean originated in the England of 1644 as the name for a signal made, by drum beat or bugle call, in the evening for soldiers to return to their quarters, often from local taverns.

By 1742 the term tattoo was referring to a military entertainment consisting of the elaboration of the tattoo with extra music and the performance of exercises by troops, generally at night, and by torch.

Today tattoos occur throughout the world, each featuring around a thousand performers. For the past twenty-one years America’s largest tattoo has occurred in Norfolk, Virginia.

The 2017 Virginia International Tattoo featured performers from seven countries and coincided with the annual NATOFest, and the 100th anniversaries of both the United States Navy (begun at the Norfolk Naval Station) and America’s entry into World War One.

The newest tattoo, “Over There! 100 Years of America and Our Allies” saluted all of these momentous events, beginning with a stunning Fanfare melding Copeland’s “Fanfare for the Common Man’ with the Shaker standard “Simple Gifts”. Bagpipes and drums, a 300-voice choir (made up of the excellent Virginia Beach City Public Schools Tattoo Festival Chorus, the Virginia Symphony Orchestra Chorus, and the Old Dominion University Concert Choir), and all of the various bands under the leadership of Robert Szabo.

The arrangement of events, the staging, and the emotional impact of such overwhelming pageantry was incredible. Everything happened to create maximum impact. Credit producer/director J. Scott, Jackson, excellent operations assistants, and remarkable production and technical staffs.

For the past thirty years or so marching bands have branched out with their versions of all kind of musical genres – classical, pop, rock, rap, disco. (I even once heard a marching band play the theme to “Mash” !)

Nevertheless, the tatoo’s most successful matching of form and content involved the music intended to be a march.

Massed Pipes and Drums saluting bagpipe composer William Laurie (1881-1916) with his “Battle of the Somme” commemorating one of the greatest and most terrible battles of World War I. Laurie fought in this horrendous battle as PM of the 8th Argylls. He died shortly after from illness and injuries sustained in the trenches.

All this led to an amazing Finale highlighted by the Armed Forces Medley, the Last Call, and a dramatic blend of “Amazing Grace” with Cohen’s “Hallelujah.”

Thrilling pageantry, stirring music, disciplined performance, and unabashed pride in our country’s past, present, and future.

This will not be my last tattoo