BASEBALL AND THE KINGDOM OF GOD 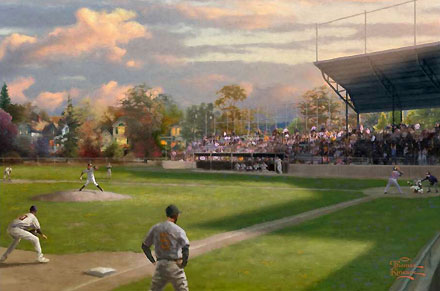 October is when baseball winds down and football starts up.

George Carlin’s classic routine “BASEBALL, FOOTBALL, AND HOW WE HAVE CHANGED” comes to mind.

In fact, baseball has caused many people to philosophize, including A. Bartlett Giamatti, the former President of Yale University and, more importantly, the former Commissioner of Major League Baseball.

We will watch or play games or sports that reflect how we think of ourselves or that promote how we wish to be perceived.[i]

Christians can watch baseball as students of the Kingdom of God.

Both human beings and baseball began in a green Edenic Paradise. On June 19, 1846, Alexander Cartwright led New York’s Knickerbocker Base Ball Club of New York to play the New York Nine  on the Elysian Fields in Hoboken, New Jersey.

Giamatti locates the etymology of the word “Paradise” in the “Avestan word paridaza, or special enclosure, as it did in ancient Hebrew, as well as, after Greek and Latin cognates were applied to the Garden in Genesis 2:8, meaning the garden in Eden.[ii]

After humans were exiled from Paradise, the image of the Green Eden remained:

The Biblical imagery of wilderness and garden from Genesis, the Canticles, Revelation 12 is caught up in the image of Elysium.[iii]

The Christian’s yearning to return to our original home resonates in baseball, a game in which all members of both teams yearn for a safe return home. “Home” plate has a “peculiar significance for it is the goal of both teams… In baseball, everyone wants to arrive at the same place, which is where they start.”[iv]  The choice of the term “home”, rather than “fourth base” is significant:

Home is an English word virtually impossible to translate into other tongues. No translation catches the associations, the mixture of memory and longing, the sense of security and autonomy  and accessibility, the aroma of inclusiveness, of freedom  from wariness, that cling to the word home[v]

Baseball, like the Christian pilgrimage, is a journey of nostalgia:

Nostos: the going home; the game of nostalgia, so apt an image for our hunger that it hurts”

Baseball’s story echoes our life stories. Both are “the story of going home after having left home, the story of how difficult it is to find the origins one so deeply needs to find.”[vi] As in baseball, the Christian’s “purpose is to get  home, back to where the others are,”[vii] to join God’s chosen people in the New Jerusalem, our heavenly home.

The author of  Wisdom noted that God “hast arranged all things by measures and numbers and weight.”[viii] In Orthodoxy, G.K. Chesterton discussed the relationship between the geometry of circle and the cross in the Kingdom of God.[ix]

Giamatti explores the intricacies of the baseball field’s dense geometry:

On this square  tipped like a diamond containing circles and contained in  circles, built on multiples of 3, 9 players play 9 innings, with  3 outs to a side, each out possibly composed of 3 strikes.  Four balls, four bases break (or is it underscore?), the game’s  reliance on “threes” to distribute an odd equality, all the  numerology and symmetry tending to configure a game  unbounded by that which bounds most sports, and adjudicates  in many – time.[xi]

Baseball, like life, is structured by activity rather than by time. We do not know how long the game, or the life, will last. “Baseball  views time as if it were an endlessly available resource”[xii], just as the Christian views his life in the Kingdom of God as extending into eternity. And, as God rested on the Seventh Day, the baseball game “stretches” during the seventh inning, because, as Rev. Louis Lotz points out,

Baseball is a long, slow game with lots of second chances. The professional football season is short — 16 games — and there is little room for failure. Every loss is huge. But baseball is a slow, forgiving game. A single game can last three hours. A season (162 games) lasts six months. A team can string together six, seven losses in a row and still win its division championship. There are plenty of second chances, which is a good thing because baseball is a game of failure. Even the best hitters fail two-thirds of the time. If you failed two times out of three in your job, you’d get fired. In baseball, a .333 batting average will land you in the Hall of Fame.[xiii]

Christians, like baseball players, weigh their failures against their desire to get home. God, like Yankee fans, demands perfection for entrance into His Kingdom. And none of us is perfect! We need a pinch hitter – a perfect one- to bat for us, so that we can get home safely.

It is a journey by theft and  strength, guile and speed, out around first to the far island of  second, where foes lurk in the reefs and the green sea suddenly   grows deeper, then to turn sharply, skimming the shallows, making for a shore that will show a friendly face, a  color, a familiar language and, at third, to proceed, no longer  by paths indirect but straight, to home[xiv]

Baseball is about going home, about how hard it is for imperfect men and women to get  there, about how driven we are to succeed, and, ultimately, our need for God to get us there. So great is our need, so many are our flaws, that sometimes that God Himself  must “sacrifice”   in order to get us home. A friend was telling me about free fantasy baseball that he plays to keep himself immersed in the experience of baseball! He recommends it.

God sent His Perfect Son Jesus to the plate, in place of sinful us, so that we might get home!

God so loved His imperfect creatures, that He sacrificed His own perfect Son, so that whomever believes in Him will be able to reach home safely.

In fact, Cain and Abel invented the “sacrifice” when they wanted to please God. Ethicist Leon Kass points out, sacrifice by human beings “is of human origin. God neither commands nor requests it; we have no reason to believe that He even welcomes it.”[xv]

Or as Jesus’ disciples put it,

Believe in the Lord Jesus, and you will be saved.[xvii] 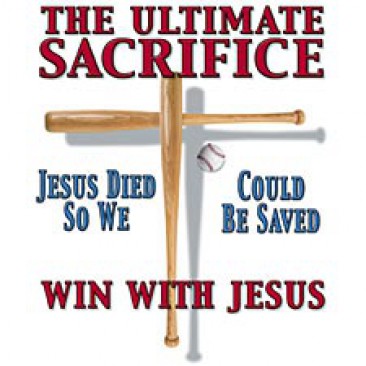