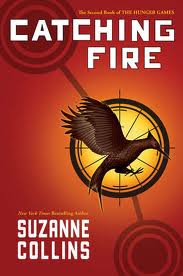 After reading the The Hunger Games, with its use of Christian imagery and symbols, the title Catching Fire, the second book of Suzanne Collins’ trilogy should cause the reader to think of The Pentecost.

The word “Pentecost” comes from the Greek name for the Old Testament festival that was called the Feast of Weeks. Chapter 2 of St. Luke’s Book of the Acts of the Apostles describes the inauguration of the new harvest. The disciples of Christ have gathered, and God gives out the gifts that will enable them to establish and spread the Kingdom of God. The Holy Spirit descends upon them in the form of tongues of fire:

“They saw what seemed to be tongues of fire that separated and came to rest on each of them.” Acts 2:3

The world of Catching Fire presents the Christian view of the Present Evil Age and the Age to Come.  Panem is ruled by the spirit of The Present Evil Age. The spirit of new life in the Age to Come arrives first through Katniss and Peeta.  Katniss has been raised as the very symbol herself of rebellion and freedom. She defied the state and aroused the citizenry when she proclaimed that she would rather die than follow rules which would lead to her friend Peeta’s death. This act of rebellion was motivated by agape love.  Katniss’ mockingjay pin is now the emblem used by the rebels seeking to overthrow the tyranny of the Capitol.

Katniss’ behavior suggests some of the actions of Christ.  Christ welcomed death in order to defeat the powers of death, thereby setting the people free to live new lives. The mockingjay echoes the dove, a symbol of the Holy Spirit’s presence in Christ and His work.  Fire dramatizes the coming of the Holy Spirit in power when it descends on Christ’s followers on Pentecost.  Katniss becomes “fire” through her costume – “the girl on fire … as deadly as fire itself” – which transforms into a mockingjay to inspire the rebellion.

Of all the characters in Panem’s Capitol, Katniss alone is given the trait of purity:

You’re so…pure,” he says finally. “I am not!” I say. “I’ve been practically ripping your clothes off every time there’s been a camera for the last year!” “Yeah, but…I mean, for the Capitol, you’re pure.

Purity connects Katniss with fire. The Greek word pur appears seventy-four times in the New Testament, and while it sometimes refers to literal fire, it is also used to describe God’s holiness, his judgment, or even the fire of hell. Jesus says,

I have come to bring fire on the earth, and how I wish it were already kindled! – Luke 12:49

Catching Fire is set on the anniversary of the founding of the state of Panem. Every twenty-five years a glorified version of the Games “makes fresh the memory of those killed by the districts’ rebellion”. Katniss and Peeta have returned to the deadly arena  as a reminder to the rebels “that even the strongest among them cannot overcome the power of the Capitol”. But rather than diminish the spirit of freedom, as the Capitol had hoped, the presence of Katniss and Peeta, the nation’s sweethearts, inflames the people’s yearning for new life.

In the previous games Peeta lived to keep Katniss alive. This time Katniss vows to do all she can to keep Peeta alive:

I have a mission. No, it’s more than a mission. It’s my dying wish. Keep Peeta alive.

Katniss and the other revolutionaries realize that Peeta’s speaking ability is essential to lead the revolution. Like the Apostle Peter, Peeta’s words have the power of a sword. They are the Sword of the Spirit.

But at the end of Catching Fire, Peeta, the sword of the Spirit, has been captured by the Capitol. His whereabouts are unknown. He may even be dead. The second part of the original Pentecost – the speech of Peter to the Jewish citizens – is thus in danger of not happening in this post-Christian trope.

The Spirit of the Age to Come has  invadedthe Present Evil Age. Revolution and hope are in the new air. Pentecost began the process of advancing the Age to Come throughout enemy territory. The Pentecost of Catching Fire points to the great Pentecost in, what the author Dorothy Sayers called, “the greatest story ever told” – the story of Jesus.