Handel’s JEPHTHA: Being Right in One’s Own Eyes: The Music of the Baroque’s Electrifying Performance 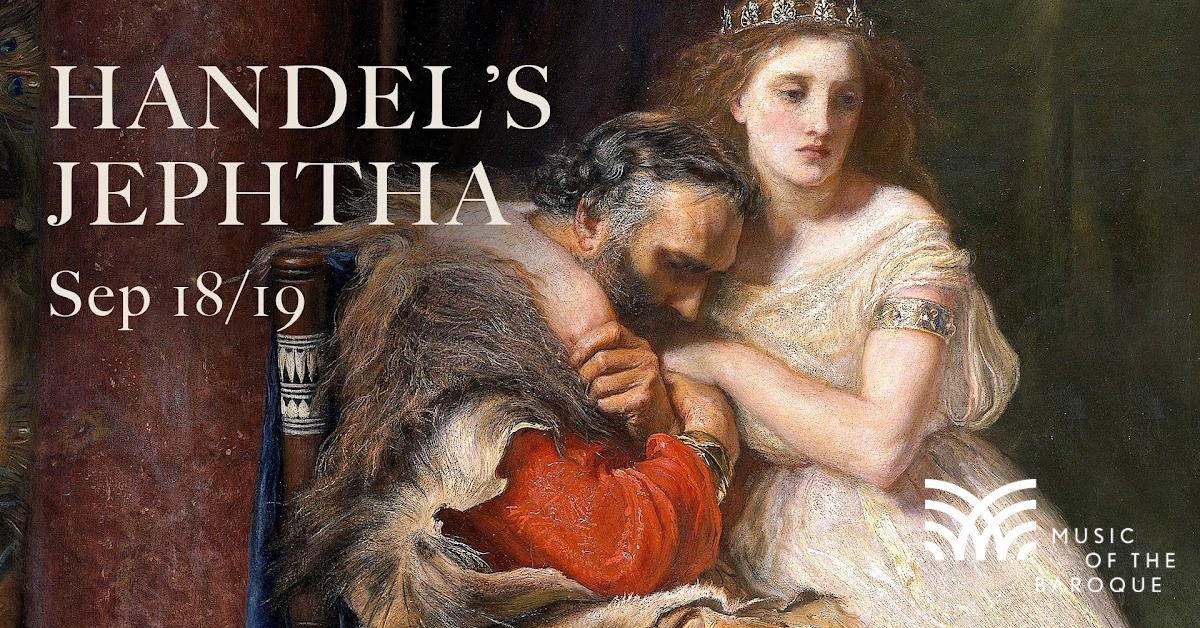 The most commonly used word to describe Georg Friedrich Handel’s 1752 oratorio Jephtha is “dark”. And the word has nothing to do with the fact that the composer was going blind as he was composing.

Jephtha, Handel’s last oratorio, is his most troubling masterpiece. The work contemplates the often inscrutable role of the divine in human affairs. As Biblical narrative aligns with classical tragedy, Jephtha vows to offer to God the first living thing he sees on returning from battle, provided he is victorious. The designated sacrificial victim, however, proves to be his daughter. Unnamed in the Bible, she is called Iphis in the Reverend Thomas Morell’s libretto, and the parallels with Iphigenia, sacrificed by her father, Agamemnon, before the Trojan war, are plain.

The story of Jephtha is part of the Biblical book of Judges, which chronicles the work of the unique leaders God gave to his people for preservation against their enemies. Judges chronicles about 350 years of disobedience, idolatry , and apostacy.

The tribes of Israel opted to enslave the Canaanite people rather than drive them from the land as they had been commanded by God. This disobedience caused the angel of the Lord to declare his judgement against Israel and then depart

Fed up with his chosen people, God abandoned the Israelites, leaving them to their own tragic devices. They quickly found another god – Baal of the Canaanites. One foreign god  followed another, as God allowed various judges to appear to rescue the Israelites from their worsening behavior. Nevertheless , every time they fell back into their immoral ways, spiraling downward into violence and madness.

“The degeneration of Israel’s tribes is accompanied by a degeneration of the quality of men called by God to serve as judge and restore order. Each judge, as the narrative continues, is successively more violent, more flawed, and more personally ambitious.”[i]

The book ends with a harrowing statement: ”In those days there was no king in Israel; everyone did what was right in his own eyes.”

Sounds like today’s Western world of personal truths. Pessimists see in Jephtha a parallel with America. From the time Puritan John Winthrop offered a lay sermon- ‘A Modell of Christian Charity”- aboard the flagship Arbella, proclaiming  that ‘we shall be as a city upon a hill”  America’s development has followed the trajectory of that outlined in Judges.

Perhaps the most troubling event in the long sad saga of Israel’s disobedience involves Jephtha. Driven from his home due to his  sinful parentage, he is called back to the desperate clan of Gilead to lead the clan into battle against the tyrannical Ammonites. Jephthah agrees  and seeks to bribe the God of Israel: in exchange for victory, Jephtha offers a forbidden blood sacrifice, in a burnt offering, of the first person who emerges from his home after the battle.

“The biggest moment of the drama, at the heat of the work, in Part II, is that of Iphis [the name given to Jephtha’s daughter] greeting her father, and his appalled reaction;  and it is superbly handled.:”[ii]

Behold they daughter, and her virgin train,

Come to salute thee with all duteous love.

Upon my tasteless ears. Begone, my child,

And leave me to the rack of wild despair![iii]

God saw Jephtha’s vow not as a sign of devotion, but rather as a hubristic act of sacrilege: sacrificing a daughter would be an abomination unto the lord. While his clan may see him as a hero, God sees Jephtha as a violent, uncontrollable apostate

However, just as later squeamish balladeers  saved Iphigenia from her father Agamemnon’s sacrifice by instead dedicating her to the virgin band of Artemis, later Hebrew and Christian commentators sought to rehabilitate Jephtha’s image. They reasoned that Jephtha did not murder his daughter; he only pledged his daughter to a life of perpetual virginity. Many did not believe a loving god would allow  his daughter to die in such a way. However, both the fathers of the ancient Church and Rabbinic Judaism  condemn Jephtha as a rash and ignorant man.

And I know, indeed, that many of the unbelievers impugn us of cruelty and inhumanity on account of this sacrifice; but I should say that the concession in the case of this sacrifice was a striking example of providence and clemency; and that it was in care for our race that he did not prevent that sacrifice. For if after that vow and promise he had forbidden the sacrifice, many also who were subsequent to Jephthah, in the expectation that God would not receive their vows, would have increased the number of such vows, and proceeding on their way would have fallen into child murder. But now, by suffering this vow to be actually fulfilled, he put a stop to all such cases in the future. [iv]

Handel had enough pain in his life without having to deal with filicide in his new opera. Consequently he and his librettist Thomas Morell, sensitive to the acceptable decorum of the age,  opted for the reformed, gentler ending brought by an angel:

The slaught’rous hand, nor such was its intent

Thy daughter, Jephtha, thou must dedicate

To God, in pure and virgin state fore’er.

As not an object meet for sacrifice,

Else she had fall’n an holocaust to God.

The Holy Sp’rit, that dictated they vow,

Bade thus explain it, and approves they faith.[v]

Handel, conscious of his audience’s delicate sensibilities, selected the revised ending of the Jephtha tale for his  opera. No blood sacrifice  for the 18th century English,

Today’s audience sensibilities would never be described as delicate. Nevertheless, the crowd which experienced the Music of the Baroque’s tremendous performance of Handel’s last oratorio  rose to its feet as one at the work’s conclusion, cheering mightily and clapping as if moved beyond words. Dame Jane Glover had not merely conducted the piece. She seemed to have reached out and caressed each and every musician’s execution as she found each bit of theatricality in the music, shaping a powerful dramatic arc for the work. The chorus, under the direction of Andrew Megill, sang as if possessed by the Holy Spirit. All that was lacking were the looks on their faces, erased by the ridiculous masks.. Orchestra and chorus alike were under superb leadership, acutely alert to every emotional subtlety in Handel’s masterful music.

I could not imagine a finer cast of soloists. Led by David Portillo’s Jephtha. Each singer did not just sing notes, rather each  one developed a true dramatic character though Handel’s music. Mr. Portillo presented a cocky, almost fanatical Jeptha whose bravado at the beginning, made the character’s dramatic fall at the  great discovery all the larger. Jeptha’s character arc could not have been made larger or more dramatic. His selfless scheming to get revenge on the family which had shunned him backfired. Lauren Snouffer’s Iphis was a daddy’s girl, who  only intensified her father’s suffering through her bold acceptance of God’s will. Her fiance Hamor, played by Aryeh Nussbaum Cohen, was conceived as an almost goofy young lover who suddenly grows up as he enlists to win his sweetheart’s love. He stands devastated as he hears the news that his dreams have all died. Clara Osowski’s Sorge lives as a humble counterbalance to her husband’s scheming to take over the family which had so cruelly rejected him. Neal Davies powerful Zebul represents the desperate family politico  who will offer Jephtha anything to have him return to save them. Katelyn Lee  offers a light and airy Angel, an eighteenth deus ex machina if ever there was one.

Too many arias, choruses, and duets stand out to list them all. But the heartbreakingly beautiful “Waft her, angels, through the skies” as sung by Mr. Portillo must be  the most moving piece of music I have heard all year.

[1] Stephen De Young. God Is a Man of War: The Problem of Violence in the Old testament. Ancient FAith Publishing, 2021.