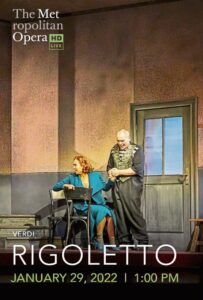 Two years after the 1851 premiere of Rigoletto at La Fenice in Venice, Verdi summarized his opera in words which seem to pertain to almost every production of the opera:

As far as dramatic effectiveness is concerned, it seems to me that the best material I have yet put to music (I’m not speaking of literary or poetic worth) is Rigoletto. It has the most powerful dramatic situations, it has variety, vitality, pathos; all the dramatic developments result from the  frivolous, licentious character of the Duke. Hence Rigoletto’s  fears, Gilda’s passion, etc., which give rise to the many dramatic situations, including the scene of the quartet which, so far as effect is concerned, will always be one of the finest our theaters can boast.

The Italian libretto was written by Francesco Maria Piave based on the 1832 play Le roi s’amuse by Victor Hugo.  However, Piave’s depiction of a venal, cynical, womanizing king (Francis I of France) was considered unacceptably scandalous. The play had been banned in France following its premiere nearly twenty years earlier. Now it was to come before the Austrian Board of Censors ( Austria then directly controlled much of Northern Italy.) Historian Edward Dent believes “it is quite possible that Verdi chose it for this very reason, much as Mozart chose Le Mariage de Figaro, because it was a play that had been forbidden, ostensibly on moral grounds.”[i]

Despite their best efforts, including frantic correspondence with La Fenice, the Austrian censor De Gorzkowski emphatically denied consent to the production of “La Maledizione”. In a December 1850 letter, he called the opera “a repugnant [example of] immorality and obscene triviality.” However, by January 1851 the parties had settled on a compromise

Carlo Marazai, the representative of the theater, conveyed, the conditions:

“The colours and the original characters that you want will be kept….The character substituted for Fransisco [the King] can be a libertine and absolute ruler of his state. The buffoon can be deformed, as you want. There will be no problem about the sack, and the only reservation is that we will have to treat the kidnapping of the buffoon’s daughter in a way that conforms to the demands for decency on stage.”[ii]

The action of the opera would be moved, and some of the characters would be renamed. In the new version, the Duke would preside over Mantua and belong to the safe Gonzaga family. (The House of Gonzaga had long been extinct by the mid-19th century, and the Dukedom of Mantua no longer existed.) The scene in which the Duke retired to Gilda’s bedroom would be deleted, and his visit to the inn would no longer be intentional, but the result of a trick.

By 14 January, the opera’s definitive title had become Rigoletto. The one  demand which was non-negotiable was the change of the title of the opera from The Curse, “La Maledizione”.

The opera premiered in a sold-out La Fenice, as the first part of a double bill with a ballet. Gaetano Mares conducted, and the sets were designed and executed by Giuseppe Bertoja and Francesco Bagnara. The opening night was a complete triumph, especially the scena drammatica and the Duke’s  “La donna è mobile“, which was sung in the streets the next morning (Verdi had maximised the aria’s impact by only revealing it to the cast and orchestra a few hours before the premiere, and forbidding them to sing, whistle or even think of the melody outside of the theatre) Many years later, Giulia Cora Varesi, the daughter of Felice Varesi (the original Rigoletto), described her father’s performance at the premiere. Varesi was very uncomfortable with the false hump he had to wear; he was so uncertain that, even though he was quite an experienced singer, he had a panic attack when it was his turn to enter the stage. Verdi immediately realised he was paralysed and roughly pushed him on the stage, so he appeared with a clumsy tumble. The audience, thinking it was an intentional gag, was very amused.

Rigoletto was a great box-office success for La Fenice and Verdi’s first major Italian triumph since the 1847 premiere of Macbeth in Florence. It initially had a run of 13 performances and was revived in Venice the following year, and again in 1854. Despite a rather disastrous production in Bergamo shortly after its initial run at La Fenice, the opera soon entered the repertory of Italian theatres. By 1852, it had premiered in all the major cities of Italy, although sometimes under different titles due to the vagaries of censorship From 1852, it also began to be performed in major cities worldwide, reaching as far afield as Alexandria and Constantinople in 1854 and both Montevideo and Havana in 1855. The British premiere took place on 14 May 1853 at the Royal Opera House, Covent Garden in London with Giovanni Matteo Mario as the Duke  and Giorgio Ronconi as Rigoletto. In the US, the opera was first seen on 19 February 1855 at New York’s Academy of Music in a performance led by the Max Maretzek Italian Opera Company.

The current Metropolitan Opera Company production is directed by Bartlett Sher, a director whose work generally pleases, but who can occasionally, make disastrous decisions in planning or executing his production. Conrad L. Osborne has enumerated the problems. The basic problem involves not giving the “curse” its full due.

The curse is  issued by an aggrieved Count ( de Saint-Vallier in Hugo, Monterone for Verdi) to a rapist monarch (Francis 1 in Hugo, The Duke of Mantua in Verdi)) and  his poison-mouthed jester (Triboulet in Hugo and Rigoletto in Verdi)- “Ah, siate entrambi voi maledetti!” (“You are both cursed!). This curse, these words,  constitute  the architectonic element  of both Verdi’s opera and Hugo’s Play Le Roi S’amuse. In dramaturgical terms, it is the “inciting incident”, the action which upsets the main character’s status quo, and drives the action to the climax.

For a curse to have effect it must be issued at a time when hostile words were believed to have the same lethal effect as physical actions, and in a culture believing in the deadly power of curses. If the characters in such a place and time believe in the power of the curse, the audience will vicariously come to believe in that power. Such a time and culture was France at the beginning of the 16th century, the situation in Hugo’s play, and Mantua in the 14th century, the time of Verdi’s opera.

Weimar Germany had no such belief in curses.

Consequently, director Sher’s decision to set the action in that culture at that specific time, robbed the play of its power, since the actor-singers were deprived of a context to motivate their passions. In Weimar the Duke’s shrugging off of the curse seems normal, while Rigoletto’s terror seems odd and overdone. In Francis 1’s  court and in the Mantua of the Gonzaga family  the reverse would be true. Shrugging off a curse would be truly reckless behavior, recoiling in despair from a curse would be the normal expected reaction.

So no matter how stunningly beautiful Michael Yeargan’s settings, or Catherine Zuber’s costumes. or the music conjured by conductor Daniele Rustioni, and the production is gorgeous. The acting and singing, all first rate. Quinn Kelsey’s powerful and expressive voice leads him to reveal the conflicts of Rigoletto’ s  personality and the strange relationship with his daughter Gilda, whom he has known for only three months. Rosa Feola’s delicate voice suggests the youthful innocence of Gilda, while Piotr Beczala’s hold on the Duke remains secure, regardless of the production details.

The Bartlett Sher’s Rigoletto is a fancy luxury liner heading the wrong way.