WHY YOU SHOULD SEE SHAW’S MRS. WARREN’S PROFESSION: PATERNITY 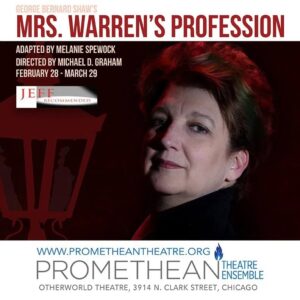 Despite the existence of DNA testing, and sites like Ancestry.com, genealogy can still offer major surprises and uproars in a person’s life.

The question of paternity tormented George Bernard Shaw all his life.

His mother lived in a ménage a trois with her husband, George, and her lover-voice teacher, George. Unsure which of the two Georges was his actual biological father, Shaw insisted on being known as Bernard.

Though he publicly pooh-poohed the subject, the matter relentlessly infuses most of his plays. Mrs. Warren’s Profession (1893) is the first major play to broach the subject. Mrs. Warren, the daughter of an unknown father,  has a daughter Vivie, who, like Shaw, doesn’t know her father either. In fact, Mrs. Warren lives a life free from matrimony and has, like Shaw’s own mother, ignored her maternal responsibilities.

The play of Mrs. Warren’s Profession is concerned with a coarse mother and a cold daughter; the mother drives the ordinary and dirty trade of harlotry; the daughter does not know until the end the atrocious origin of all her own comfort and refinement. The daughter, when the discovery is made, freezes up into an iceberg of contempt, which is indeed a very womanly thing to do. The mother explodes into pulverizing cynicism and practicality; which is also very womanly. The dialogue is drastic and sweeping; the daughter says the trade is loathsome; the mother answers that she loathes it herself; that every healthy person does loathe the trade by which she lives. And beyond question the general effect of the play is that the trade is loathsome; supposing anyone to be so insensible as to require to be told of the fact. Undoubtedly the upshot is that a brothel is a miserable business, and a brothel-keeper a miserable woman. The whole dramatic art of Shaw is in the literal sense of the word, tragi-comic; I mean that the comic part comes after the tragedy. But just as You Never Can Tell represents the nearest approach of Shaw to the purely comic, so Mrs. Warren’s Profession represents his only complete, or nearly complete, tragedy. There is no two-penny modernism in it, as in The Philanderer. Mrs. Warren is as old as the Old Testament; “for she hath cast down many wounded, yea, many strong men have been slain by her; her house is in the gates of hell, going down into the chamber of death.” Here is no subtle ethics, as in Widowers’ Houses; for even those moderns who think it noble that a woman should throw away her honour, surely cannot think it especially noble that she should sell it. Here is no lighting up by laughter, astonishment, and happy coincidence, as in You Never Can Tell. The play is a pure tragedy about a permanent and quite plain human problem; the problem is as plain and permanent, the tragedy is as proud and pure, as in Œdipus or Macbeth. [i]

Vivie Warren  is Shaw himself, ignorant of father and doubtful of her mother. Shaw’s friend William Archer thought Vivie nothing more than “Shaw in petticoats.” Both Vivie and Shaw  have rejected personal happiness as an illusion, to devote themselves to the betterment of others. They choose sexual isolation, “away from it all – away from the sentiment of the tie I formed under the spell of that man, away from the world they are a part of.”

Influenced by reading John Bunyan’s Pilgrim’s Progress as be wrote Mrs. Warren’s Profession, Shaw has Vivie turn her back on the tainted world, just as Christian does in Bunyan’s allegory, flying from his house and family with his fingers in his ears, crying, “Life, life, eternal life”.

As Shaw’s fame increased, so did the nasty stories about his parentage. Finally, Shaw was forced to write a play to “prove” that a female student could live with her male voice teacher in a strictly Platonic manner.

Pygmalion is the slightly fictionalized story of Shaw’s mother, Lucinda Elizabeth Shaw, and her live-in guru/lover, the renowned voice teacher George Vandeleur Lee. Young Bernard had been raised in the ménage à trois of mother, George Vandeleur Lee, and his “father” George Carr Shaw. In fact, the character of Eliza Doolittle is as uncertain of her parentage as Shaw himself.

Shaw wrote Pygmalion to demonstrate once and for all how a young woman, like his mother, could be educated by a dashing man, like Vandeleur Lee, without any hint of sexual activity between them. At the end of the play Eliza plans to support herself by teaching phonics, just as Shaw’s mother supported herself by giving voice lessons after being abandoned by Mr. Lee.

Despite his best efforts, Shaw could not get away from the question of parentage. Rumors began that Shaw was the illegitimate father of his protégé, the young and gifted actor-playwright, Harley Granville-Barker, the original Frank in Mrs. Warren’s Profession.

Maurice Browne’s pioneering avant garde company, The Little Theatre of Chicago, presented Mrs. Warren’s Profession on November 15, 1916 in the city’s Fine Arts Building.. The play opened to general critical disapproval. Richard Henry Little said, “The Reverend Samuel Gardner in Mr. Browne’s rendition of  Mrs. Warren’s Profession is well worth seeing, because then you can go around and brag that you have seen the worst actor in the world.” 0. L. Hall said that “if any­one can get any entertainment out of it except by taking a peep at Raymond Johnson’s attractive stage settings he is welcome to it.” Percy Hammond disapproved of the scenery as well; “however beguiling to the Playhouse eye,” he said, “it does not suggest the rural and Philistine England of Mr. Shaw’s prospectus.”

This production, which Maurice Browne hoped would be the financial salvation of the Chicago Little Theatre, actually paved the way for its bankruptcy.

Brown discovered that discussions of genealogy  can disrupt life in many ways. And you don’t need to appear on the Maury Povich show to discover them.