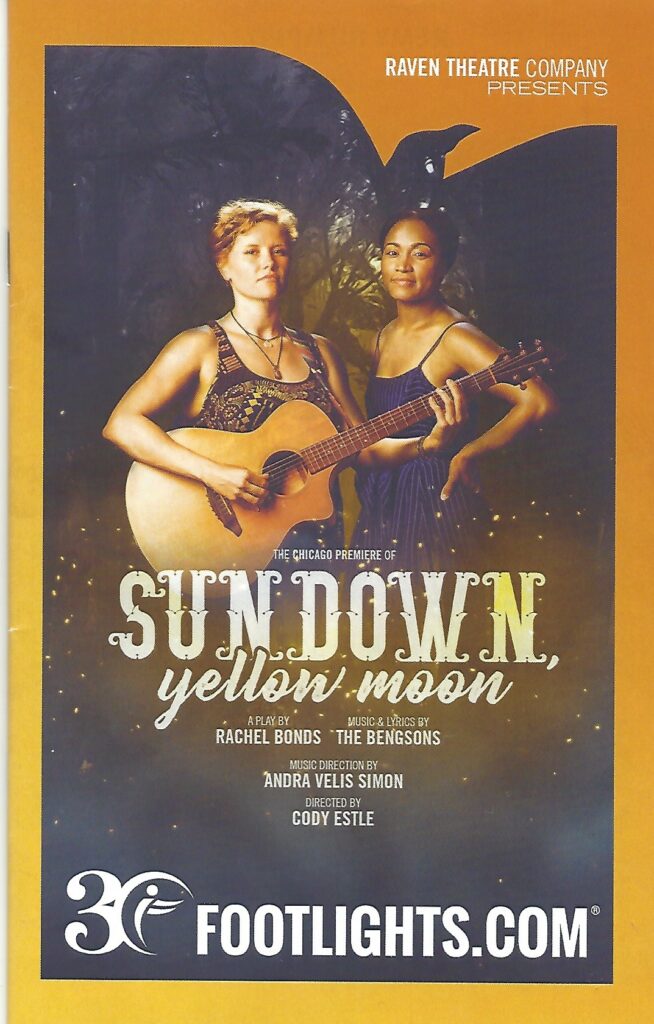 A Yellow Moon is sometimes called a Harvest Moon, appearing, as it does, at the time one reaps what has been sewn. As such, Rachel Bonds, the author of Sundown Yellow Moon now playing at the Raven Theater, has named her drama-with-occasional music  with a prophetic nod to the play’s possible action.

Members of a broken family, headed by patriarch Tom, have gathered at their Southern homestead. In a situation akin to that of Arthur Miller’s Willie Loman,  the distressed father has been joined by his two children who seek to help him in his time of need. But unlike Willie, Tom’s wife is gone, divorced, and he has no sons, only twin daughters. Tom, like Shakespeare’s Lear and Prospero, has had his kingdom overthrown. He has found that the bottom of his life has fallen out. And the daughters, Rayleen and Josephine, like Willie Loman’s Biff and Happy,  have their own troubles with which to contend. Even Carver, the professional counsellor assigned to Tom’s case, is followed by a troublesome past youthful incident.

Despite rich and evocative allusions to other dramas, playwright Rachel Bonds chooses to leave the dramaturgical echoes alone. Shakespeare and Miller’s family exist only in the audience’s searching mind. They find no useful correlatives  in Bonds’ stage action.

The family patriarch, a liberal English teacher, has been suspended from his long-time prep school  position for throwing a raging fit at his conservative headmaster, and, in the process, accidentally blackening the eye of the headmaster’s wife. Like Alice in Wonderland, he hopes  to find his way back to the life he loved. His only companion outside his daughters, is a forced one. “Carver the Strange”, as the sisters remember him, a school-appointed counselor. Carver serves as Tom’s Fool/Kent and his Ariel/Caliban. Carver haunts the house with his all-night cruises around the homestead. Carver is also a past high school crush of Rayleen’s.

Joey attempts to find solace by jogging at the local reservoir. But her manic runs throw her into Ted Driscoll, one of her former high-school crushes, now a suave, but blocked, local poet, resentful of his more acclaimed academic wife. The Yellow Moon they see is the Cheshire Cat’s smile to non-poet Joey, but merely a fingernail clipping to the would-be poet Ted.

Despite raising the allusion to Lewis Carroll’s masterpiece of symbolic actions, Ms. Bonds again refuses to make the reference a contributing engine of her plot or characters. It is just mentioned and forgotten.

Again, like Lear and Prospero, Tom has only female children. Rare in both classical mythology and drama, his twin daughters recall the incarnations of the Egyptian twin goddesses – Isis, and her “Dark Twin”, Nephys. In Sundown Yellow Moon, Ray is the Isis and Joey echoes Nephthys.

Nephthys’ is the Latin version of her Egyptian name `Nebthwt’ which translates as  “Mistress of the House. Nephthys protects the souls of the people, since they are associated with death and decay Prayers were offered to Nephthys at twilight for protection. At twilight Joey escapes her father’s house for the reservoir.

The two Egyptian goddesses manifest their Divine power differently. While Isis guides and sheds light on the hidden paths of the Otherworld,  Nephthys speaks obscurely: “Hidden are the ways for those who pass by; light is perished and darkness comes into being, so says Nephthys.” Likewise Ray could be the direct daughter; Joey could speak obliquely. Like Ray and Joey, the Two Sisters could be not so much opposites as complements to each other. Nephthys’ magical skills may be Isis’ mirror image. Nephthys’ darkness could balance Isis’ light.

In the  famous Lamentations of Isis and Nepthys,  Isis and Nephthys work together to revive the god Osiris and bring him back to life,[i] just as Joey and Ray seek to restore their father.

But Ms. Bonds will have nothing of Egyptian mythology in her play, despite making light and dark twins central to her dramatis personae. Why bring up so many literary and classical references, only to ignore them? Is Ms. Bonds deliberately toying with her audience? If so, to what purpose? None ever becomes clear.

Ray, Tom’s Isis daughter, the musical daughter, has just left her job and her former supervisor. Ray, like Lewis Carrol’s Alice finds herself in one of life’s major rabbit holes. Joey, Tom’s  Nephthys daughter, and an aspiring academic like her father, faces a Fulbright stay in Berlin, but decides to decline the offer. She is yet another family member in a Wonderland phase of life. Uncertainty menaces Tom’s family. Tension is thick, as the mostly unspoken past hovers over the family homestead.

The family tries to find and give comfort. Each life has arrived at a major critical  turning point . Former lives have come, or are coming, undone. They don’t know where to turn next, so they gather to play music and sing. The Yellow Moon is also known as the “Singing Moon.”

Both Bob Dylan and the Neville Brothers found success  with songs about the Yellow Moon. Maybe Tom’s family can sort themselves out by singing under the autumn’s yellow moon.

Dylan sang of the yellow moon on his 1975 Blood on the Tracks album. The album’s great song, If You See Her, Say Hello, relates to the family’s inability to get past their past hurts:

If you see her, say hello, she might be in Tangier
She left here last early Spring, is livin’ there, I hear
Say for me that I’m all right though things get kind of slow
She might think that I’ve forgotten her, don’t tell her it isn’t so

We had a falling-out, like lovers often will
And to think of how she left that night, it still brings me a chill
And though our separation, it pierced me to the heart
She still lives inside of me, we’ve never been apart

If you get close to her, kiss her once for me
I always have respected her for busting out and gettin’ free
Oh, whatever makes her happy, I won’t stand in the way
Though the bitter taste still lingers on from the night I tried to make her stay

I see a lot of people as I make the rounds
And I hear her name here and there as I go from town to town
And I’ve never gotten used to it, I’ve just learned to turn it off
Either I’m too sensitive or else I’m gettin’ soft

Sundown, yellow moon, I replay the past
I know every scene by heart, they all went by so fast
If she’s passin’ back this way, I’m not that hard to find
Tell her she can look me up if she’s got the time

A song of loss, regret, guilt, and sadness, but also one of love and respect, a  melody of memory seemingly locked into auto-replay. Dylan’s son Jakob describes the song as his ‘parents talking” at the time of their breakup. Musicologist Clayton Heylin sees the song as “written down with the ink still wet from last night’s tears.”[ii] The song could be the soundtrack for Tom, Joey, and Ray’s situation.

Yellow moon, yellow moon
Why you keep peeping in my window?
Do you know something I don’t know?
Did you see my baby
Walking down the railroad tracks?
You can tell me if the girls
Ever coming back
Is she hid out with another
Or is she trying to get back home?
Is she wrapped up in some other’s arms?
Or is the girl somewhere all alone?
Can you see if she is missing me
Or is she having a real good time?
Has she forgotten all about
Or is the girl still mine all mine?

With your eye so big a shiney
You can see the whole damn land
Yellow moon can you tell me
If the girl’s with another man?
Man?
Man?

With your eye so big a shiney
You can see the whole damn land
Yellow moon can you tell me
If the girl’s with another man?

In Neville’s song the yellow moon witnesses broken relationships, sees into the future, and honestly reports of the lost lover’s pain and plans.  Most importantly, Neville introduces a great  need to “get back home”,  the cry of Alice in her Wonderland, and possible motivations for Joey and Ray.

The floundering characters sing and play. Music, unlike life,  can allow each character to have a clear part, a distinct role.  Different than with life’s pilgrimage, a piece of music temporarily stops life’s  journey to share a common process about a common goal. Music creates an instant community and a  warm sense of well-being. Johnny Cash sums it up: “Get rhythm when you get the blues.”

But Ms. Bonds places the music of the Bengsons in the play and just leaves it there. No attempt is made to use the music to develop the characters, their relationships, or even the plot arc. The music, however lovely, becomes dispensable. Too bad.

Ms. Bonds  has set her action in the American South, the birthplace of  America’s most original music  – country, gospel, and jazz. In the South,  a guitar is both a standard household appliance, and a defining part of the home  décor. While singing and playing, southerners sort through the pains and joys of living: “Three chords and the truth.”

“a deep sense of the irony and mystery of human life, an affinity for the underdog, for some an adulation of heroes and glory, whether in wars, athletics, or automobile races; and for some a yearning for a past that never was, another life that might have been. “[iii]

However, the South, like so many (too many) other things Ms. Bonds throws at us, is ultimately irrelevant to the play’s action or characters. The same situation, characters, and dialogue could easily exist in Prague or Seoul. Not because Ms. Bonds has tapped into some universal truth, but rather because location seems to be  irrelevant to her concerns

Sundown Yellow Moon ends as it began. Little has changed, little has been learned. The dramatic possibilities remain unrealized possibilities. Consequently the sadness for the characters spills over into a sadness for the play itself. As Terry Malloy might say, “The play coudda been a contender”. Instead it remains but an outline for a sad story still to be filled in and deepened.

Director Cody Estle, whose past work I have admired to a fault, and his primary design co-conspirator Jeffrey D. Kmiec have worked appropriately. Their creations are as inspired as Ms. Bonds writing. The assembled cast is very strong. Liz Chidester, Diana Coates, Jordan Dell Harris, and Josh Odor develop as much subtext as they can. But, in the process, they show that even great subtexts need at least a good text.