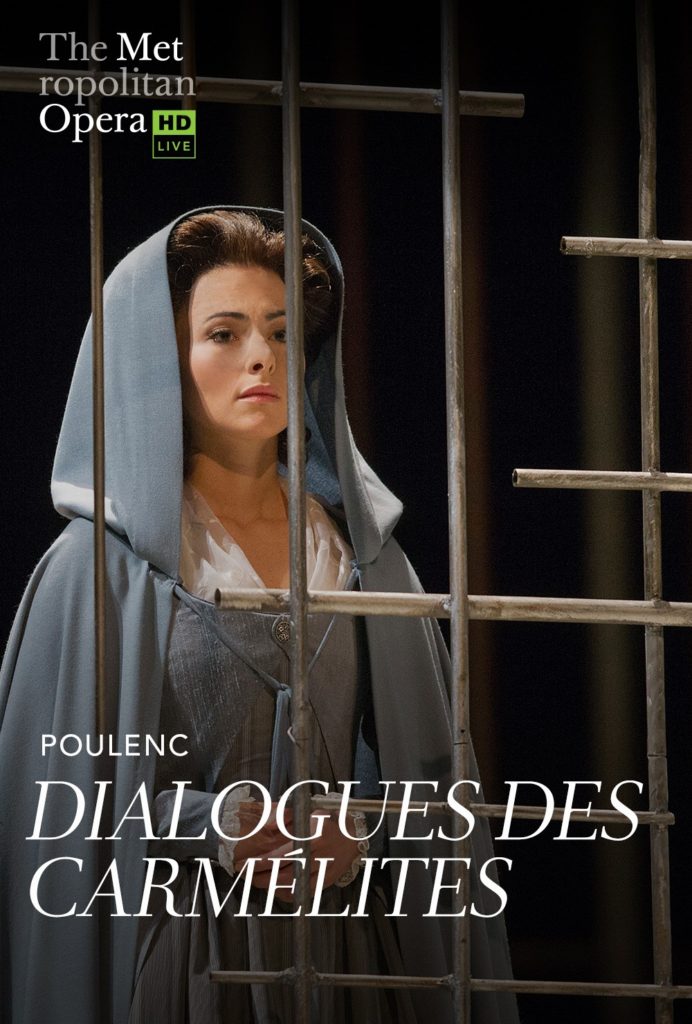 Sixteen days after John Dexter’s  1977 production of  Dialogues des Carmélites (Dialogues of the Carmelites)    opened at the Metropolitan Opera a detonated tear gas canister in the lobby forced the 4,000 members of the audience to evacuate the building.

Suddenly fear was not just a theme in Mr. Poulenc’s great opera about the human struggle with worldly passions.

Composed of twelve scenes, the libretto echoes the thirty steps in St. John Climacus’ Divine Ladder of Ascent (699A.D.),  a monastic’s guide through the snares and pitfalls of the world of human passions leading toward salvation in theosis. The ladder, like the life of a nun, has absolutely nothing to  do with moral progress. As Father Stephen Freeman wisely observes, the Ladder of Divine Ascent is actually the ladder down which the godhead descends to lead the human along  the necessary path to humility, failure, and shame, until he is united with Christ on the path to the cross.[ii]

This emptying progress is brilliantly portrayed by soprano Isabel Leonard, who turns in an extremely moving performance worthy of the history books.  As she struggles to be “better”, she fails. Not until her Blanche embraces her fears and failures does she find the comfort of Christ her Savior. Poulenc removes Blanche from the stage for the final few steps on the ladder. The result creates, as it does with Shakespeare’s Hamlet, a transformed reappearance, and with her transfixed demeanor we find a living icon  to behold and wonder at.

Poulenc’s opera had a complicated journey to the stage. A sister who survived the French Revolution, Mother Marie, first told the story of the Carmelite nuns in her memoirs. In 1931, the German novelist Gertrude  von Le Fort used the story as the basis for her novel Die Letzte am Schafott (The Last on the Scaffold). Le Fort created the character of Blanche de la Force, the heroine of Poulenc’s opera, reflecting the author’s own struggles  with Christian faith and fear.

In 1947, a French priest, Father Bruckberger, and cinematographer/screenwriter Phillipe Agostini, adapted the novel for the screen. Eventually their treatment came to the Catholic novelist Georges Bernanos, who finished the screenplay while dying of cancer. His screenplay Dialogues des Carmélites (Dialogues of the Carmelites)  was published posthumously in 1948, and then performed as a stage play.

The script is set inthe year is 1794, the high-water mark of the French Revolution’s reign of Terror. To live in a religious community and devote one’s entire life to prayer was now a crime punishable by death. On June 22, 1794, in the French town of Compiegne, sixteen former Carmelite nuns, already banished from their convent, were rounded up, arrested for counter-revolutionary activities, and sent off to Paris for trial and execution.

The music publishing company Ricordi commissioned an opera about the incident for a La Scala premiere. Poulenc chose to use Bernanos’ screenplay as his text, making only a few cuts to shorten the work. The opera finally premiered in Milan on January 26, 1957.

The Reign of Terror, called “the approaching storm” by the opera’s Marquis, is the political evil animating much of the drama. Overwhelming fear is the psychological evil tormenting Blanche de la Force, a young woman described by her brother as “high-strung and inclined to be morbid”, but by her father as” only sensitive, and too intense.”  Blanche seeks safety and peace in a Carmelite nunnery. She begs her father, “Pity my grief and let me hope that I shall find some cure for the dreadful torment that makes my life so unhappy.” Blanche is drawn to the Carmelites for “a life that is heroic.”

She stands, at opera’s end, as a great heroine, indeed.

Throughout the 30 scenes, Sister Blanche and the audience come to accept as true compatriot novice Sister Constance’s belief that “what goes by the name of chance is perhaps only the logic of God.”

The Metropolitan Opera’s current revival of Dialogues des Carmélites is an emotional experience, to say the least.  Besides the radiant Isobel Leonard’s Blanche, the opera’s other leading ladies deliver nothing less than  spectacular tour de force performances. Light soprano Erin Morley’s sweet Sister Constance, who votes against martyrdom hoping to spare Blanche the shame of being the only one so  voting, resonates with the audience as the most relatable character. Mezzo-soprano Karen Cargill ‘s Assistant Prioress Mother Marie and soprano Adrienne Pieczonka’s  New Prioress Mme. Lidoine find ways to differentiate the “sophisticated” Christian mind from the “peasant” Christian mind in their characters’ singing and acting. The legendary Karita Matilla as Mme. De Croissy, Prioress of the Convent, shows why the adjective “legendary” comes with her name. Her death scene, in which she accepts a violent and tortured death so that Blanche might receive the peaceful and joyous one she had earned, is a stunning piece of theater. When these strong singers and actors are present, the stage is electrified with dramatic expectation.

John Dexter’s classic staging on David Reppa’s intensely stark set, with Jane Greenwood’s lovely faded period costumes, and under Gil Wechsler’s evocative, shadow-filled light, lives up to the historic status the production has attained over the years. The simplicity and economy of John Dexter’s production mirrors that of the nuns life. As he explained,

Imagination/Simplicity  is a policy. It is an approach to opera for the twentieth century…Imagination costs more in the mind but less in the purse. But the imagination must swing out from the stage to embrace the audoience and the audience must be trained to join in an act of imagination.[iii]

The world première of the opera occurred, in Italian translation, on 26 January 1957 at La Scala in Milan. The première of the French-language version took place in Paris on 21 June 1957. Reviewing the premiere, critic Christina Thoresby said Poulenc had written “a score of rare lyrical beauty. Which is clear flexible and brilliantly manipulated. It is also frankly tonal and utterly sincere, and any derivative elements have been synthesized with freshness and infallible taste.”[iii] Under the sensitive baton of Yannick Nezet-Seguin the score reveals those same qualities

The United States première, in English, followed in San Francisco in September 1957. Of that production, Howard Taubman, the critic for The New Yok Times, christened it, “one of the most impressive pieces for the lyric theatre produced in some time.”[iv] Harold Schonberg noted the work’s affinity with Debussy’s Peleas et Melisandre, in that there are many scene changes without any Verdian arias. Mr. Nezet-Seguin also found the Debussy-like aspects in Poulenc’s score,  while clarifying the major differences.

By the end we have witnessed Sister Constance’s prophecy come true:

Someone, when it will be his turn to die, will be surprised that he finds it so easy. And that it feels so comfortable. We do not die for ourselves alone, but for each other. Or sometimes instead of each other. Who knows?

As France’s greatest songwriter of the twentieth century. Poulenc uses three main musical forms: Choral and orchestral interlude; recitative, words sung as to imitate speech;  and arioso, singing with the rhythm of speech, but with the melodic quality of an aria.

To the memory of my mother, who revealed music to me; of Claude Debussy who gave me the taste to write some; and of Claudio Monteverdi, Giuseppe Verdi and Modest Mussorgsky who served as my models.

How is it that, being men, as we are, and wearing flesh of clay, you displayed such virtues, so that you even endured death for the sake of those who slew you? How, few though you were, did you conquer the world? How, though simple and unlettered, did you overcome kings and rulers? How, though unarmed, naked and poor, enclosed in weak flesh, did you defeat the invisible demons?[vi]

Bravo to the Metropolitan Opera for choosing Dialogue of the Carmelites to conclude the 2018-2019 season.

[vi] C.A. Patrides, The Grand Design of God. The Literary Form of the Christian View  of History. (London: Routledge and Kegan Paul,1972), p.16.