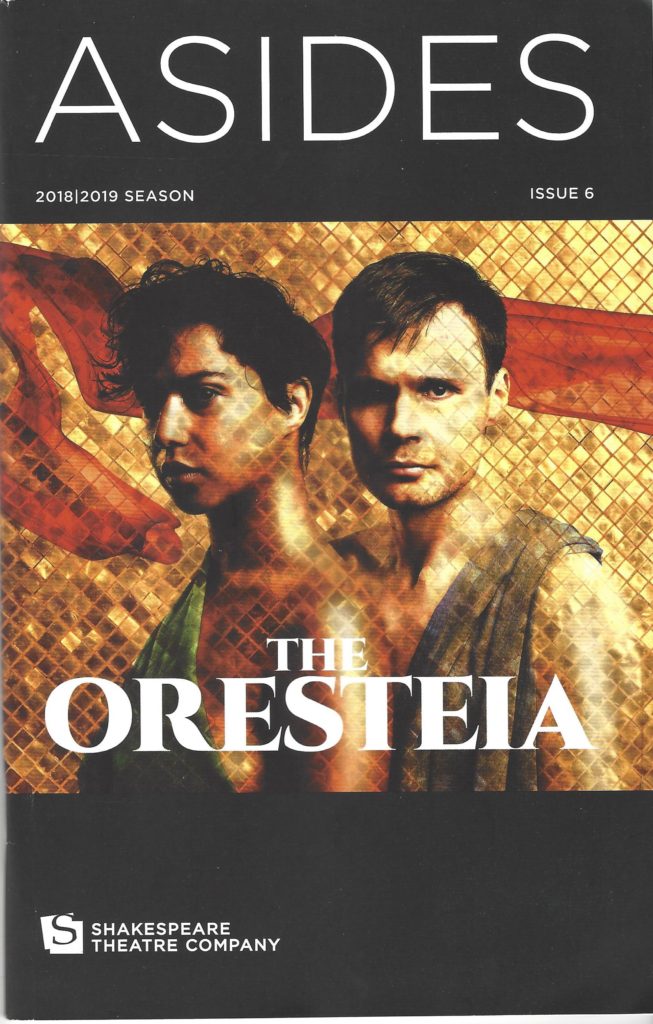 Aeschylus’ trilogy The Oresteia stands as one of the pillar’s of Western Civilization.

The three plays together mark society’s turn from a collection of families and clans whose personal interests dominate to the polis, the city, for which justice must mean more than individual retribution. In the process, the gods lead the way; humans are simply incapable of finding a way out of their passions. The journey causes great suffering. But Aeschylus observes that suffering is the only way to wisdom.

Aeschylus Oresteia, first performed in Athens in 458 B.C., is the sole surviving Greek tragic trilogy, and one of those peaks (like Dante’s Comedy, Michelangelo’s frescoes for the Sistine Chapel, or Bach’s St Matthew Passion) that loom above the other mountains of Western culture as defining expressions of their age.”[i]

The hero of Aeschylus drama is not an individual, as in the plays of Sophocles  and Euripides, but his hero is the group, the people of Athens. Aeschylus places them in the center of his story of the search for justice.

The House of Atreus, the symbol of all of humanity, is an edifice dripping with the blood of past revenge killings. Faced with a continuation of the bloody cycle, the gods intervene to create a judicial court system. The Court of the Areopagus, is supervised by the goddess Athene, who will, if necessary, cast the deciding vote after each side has had an opportunity to present its case.

Orestes, the sole surviving son of the family, is acquitted of the murder of his mother and her lover, Aegisthus. The avenging Furies are overthrown and banished, becoming beautiful deities, respected and protective of the new system of justice.

The play shows Athens moving from a collection of warring tribes to one nation under God, the model for all subsequent Western societies.

The Oresteia celebrates a manifold emancipation. Its author takes an extraordinary risk…when he creates the first courtroom drama and allows the resolution of Orestes fate to depend on a (very select) jury of Athenian citizens…The trilogy indicts and systematically evicts women and female influences in the Greek world. By the end of the action, the female principle has become a virtual irrelevance in political and metaphysical terms.[ii]

So when Michael  Kahn announced that his final production as Artistic Director of the Shakespeare Theatre Company would be The Oresteia,  I thought the selection a remarkably bold, and even courageous, choice. No doubt, the best time to stage an infuriating play is just before walking out the door. The contemporary Furies would have little time to do more than nip at his heels.

But the Oresteia presented at his theater is created by Ellen McLaughlin, who “freely adapted” the masterpiece to the point of unrecognition.

A comparison is in order.

Aeschylus’ Agamemnon is a patriot, the land’s ruling monarch, and the General of the Armies who, like the Biblical Abraham, was willing to obey god  and sacrifice his beloved child for the sake of his country. On the other hand, McLaughlin’s Agamemnon is a horny war-crazy religious zealot who cares nothing about his children or wife. Aeschylus’ Clytemnestra is a philandering egotist who takes Aegisthus as her lover and co-regent as soon as her husband has set sail. She kills her returning husband so that her lover can keep the throne. But not McLaughlin’s Clytemnestra. She is a middle aged Valley Girl, the Real Housewife of Argos, peppering her banal speech with the occasional “like, you know”, “I mean”, and, of course, the obligatory “whatever.”  Harried by all of the housekeeping chores which seem to have fallen to her in her husband’s absence, she spends her time brooding and plotting. She has no lover. All this Clytemnestra has  is  her dead daughter, Iphigenia,  a character in this version but not in Aeschylus original.  With her walking-dead daughter Clytemnestra stokes her emotional engine to fuel her forthcoming revenge on her husband when he returns.

Aeschylus’s Clytemnestra is a predator, McLaughlin’s is a victim.

In Aeschylus’ world the gods are ever-present, making their will know to all. In McLaughlin’s world only the Greek version of the “deplorables” believes in any god or a supernatural reality. McLaughlin characterizes believers as mentally ill, and subject to sudden seizures when they mistakenly believe a god is addressing them.

In Aeschylus’ drama the gods begin to move into the forefront of the drama when Orestes acts under direct command of Apollo. His Orestes has two motives – to obey god, and to revenge. Apollo promises to protect Orestes. On the other hand,  McLaughlin’s Orestes is, like his sister Electra, a mentally deranged religious fanatic, under the illusion that the gods are telling them to kill their mother.

Aeschylus concludes his great drama with Zeus imposing new laws to replace the ancient rights of vengeance. In no other way than by the hand of God can order be imposed on chaos. To believe otherwise would make one guilty of hubris:

There can be no such thing as Justice if a king, husband, father, can be murdered with impunity, since ordered society would be at an end.[iii]

Aeschylus allows Athena to supersede Apollo. She is kindlier in her understanding of the female Furies. Athena brings moderation, a middle ground, tolerance, level judgement, reason, and mercy. These are the divine aspects in man. The resultant Court of the Areopagus is therefore a divine institution.

Athena’s attitude allows the Furies to accept her arbitration. The female Furies  never would have accepted Apollo. Athena wisely agrees with them that the fear of punishment of those guilty of bloodshed is essential for an orderly society.

In Aeschylus’ view of social Apollo insists on primacy of marriage-bond. On the other hand, the Furies had insisted on primacy of the blood bond. They were, after all, the demons of  the primitive vendetta-law, now ordered to become benevolent patrons, changing their name to “Eumenides”, the Kindly Ones of Athens.[iv]

The closing of Aeschylus’ play “rings with joy as well as tumult. A final procession forms, vivid with red cloaks and bright with torches, to escort the Furies to their new homes. The bloody robes of Agamemnon and his murderers have become the robes of law-abiding citizens and their guests. The torches that heralded assassination blaze in honor of a harmonious settlement of ancient wrongs. Athens has suffered; Athens will now go forward under the guidance of her goddess who embodies justice and compassion, the equity of Heaven and the energies of the Earth.”[v]

In McLaughlin’s Oresteia there are no gods, so no god establishes a  court to preside over it. In McLaughlin’s world the Furies do not exist. They are simply bad moods. McLaughlin allows the play’s peasants to determine the fate of Orestes and Electra. Hubris reigns. Like the Stalinesque show trials and the French Reign of Terror, the accused grovel in the dirt while waiting the arbitrary verdict of the collective.

In the past, whenever a production of a classic Greek play was planned, the question of style loomed large. The Greek theater was very different than ours. The plays were performed outdoors in a large amphitheater. Men sung and danced all the roles. (Attempts to recreate the plays in the Renaissance resulted the in the creation of “opera”). And they were performed by a chorus, plus only three masked actors, doubling or tripling. The texts were composed for maximum effect under those performance conditions.

How is a contemporary theater company to proceed? Perhaps psychological realism has wiped out the possibility of any other style of performance

When Peter Hall directed the Oresteia, he knew that the “emotions are so violent they must be contained within the mask”[vi] Mr. Kahn’s production has no masks and employs female actors to play the female roles. The actors do not sing and do not dance. Their acting style could best be called “kitchen sink heroic”[vii] ( Naturally, when the passions seem too large for a kitchen, the audience cannot help but laugh, however inappropriately).

Aeschylus is credited with establishing spectacle as the basic material cause of drama. The row of bonfires on the Greek hills allowed the audience, as well as the play’s Watchman, to see the approaching victorious navy. The Furies’ torchlight procession exiting to the Greek hills dramatically physicalized the passing of the guard which had just taken place. Within the plays themselves, Aeschylus, as the director, introduced split level acting areas, reveals, tableaux, exotic costumes, solemn dances, spectacular effects, and color symbolism. (His Furies were supposedly so terrifying to behold and hear that pregnant women in his audience actually miscarried.) Rather than celebrate Aeschylus as a pioneer in theater technology by employing the latest stage wizardry, (as with the DISGUISE software). The designers employed for the Shakespeare Theatre Company’s Oresteia seem to purposely restrain themselves. For some reason they limit their creative palate to the kind of cloths and banners one might find in Rogers and Hammerstein’s “Little House of Uncle Thomas”, as if in homage to Bertolt Brecht’s Caspar Neher. As for the costumes, a hodgepodge of periods and styles fill the stage. The washed-out peasant chorus is united by the shoes they wear – Woke-friendly Millennial brown oxfords, perhaps of the Wolf & Shepherd Closer Cap Toe variety.

When Eugene O’Neill  dared to give the Oresteia a contemporary look, using Freudian psychology as a substitute for the Greek notion of Fate, his Mourning Becomes Electra was roundly criticized. Elder Olsen led the attack:

O’Neill’s play is “a general debasement of character, motive, and action. The Aeschylean figures are all of an imposing stature; O’Neill’s are not.”[viii]

If those words were true of a playwright of O’Neill’s genius, imagine how they fit the Oresteia of Ms. McLaughlin.

The actors do the best they can in the situation. Kelcey Watson’s Agamemnon strives to present a noble warrior and, when allowed, succeeds quite well. The Electra and Orestes of Rad Pereira and Josiah Bania respectively seem like they could have come from Aeschylus’ world, when not compelled to play insane. (Their best scenes are the ones which most closely follow Aeschylus’ dialogue pattern ) Aristotle believed a good tragedy would evoke pity and fear in the audience. Those emotions are evoked, but not for the characters in their dramatic situation, but rather for the actors in the performance circumstances.

[vii] The term “kitchen sink’ was coined by art critic davids Sylvester to describe the painters of the 1950s who focused on the nundamne ephemera of everyday life. The plays of John Osborne soon acquired the adjective.