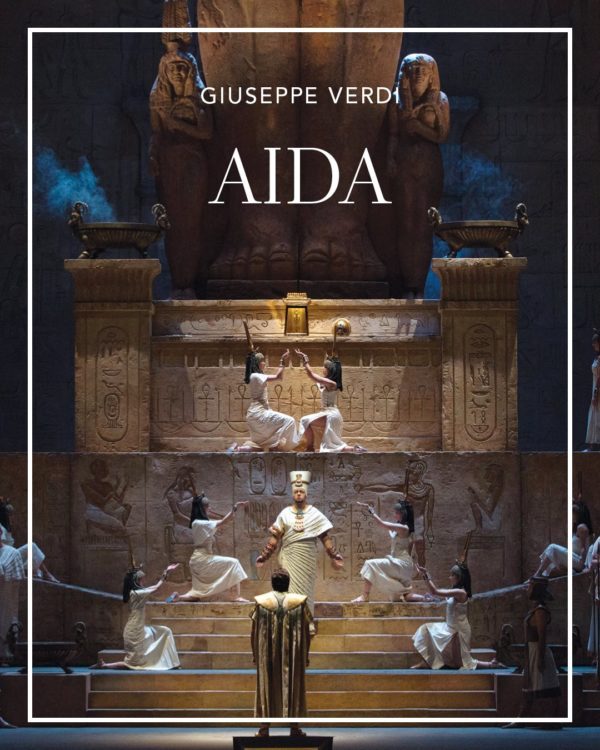 You can admire her through the Met HD LIVE broadcasts, but to really appreciate her power one must see her perform live on stage.

At New York’s Lincoln Center, we caught her final rendition of the princess Aida in the Metropolitan Opera’s current production of the Verdi classic.

Nothing speaks to the culture of nineteenth century Europe than “grand opera.” In fact, the phrase itself dates from descriptions of certain productions of the Paris Opera between 1820 and 1850 and refers to an opera featuring large scale casts and orchestras and spectacular scene and costume designs.

And usually a larger-than-life diva.

A stage actor’s ability to command a stage is evident only in the long shot, the automatic standard picture in live performance. To command a full stage composition an actress needs to play utilizing not just her face and voice, but her entire body.

Anna Netrebko dominates the stage whenever she is on the stage. She inhabits the entire space available to her. Her erect body is employed as the diameter of an invisible performance sphere. Ms. Netrebko fills that sphere consistently in gesticular ways not even attempted by the other singers. Her arms rarely hang by her side. Extended and alive, her limbs provide both a subtext and a counterpoint to what she gloriously and soaringly sings. Even while moving in every possible direction, Ms. Netrebko’s full physicality is engaged. [1] Often, she stands and sings in a full back position. Nevertheless, even in a weak body position , she expressively lives the triumphant role of Aida. 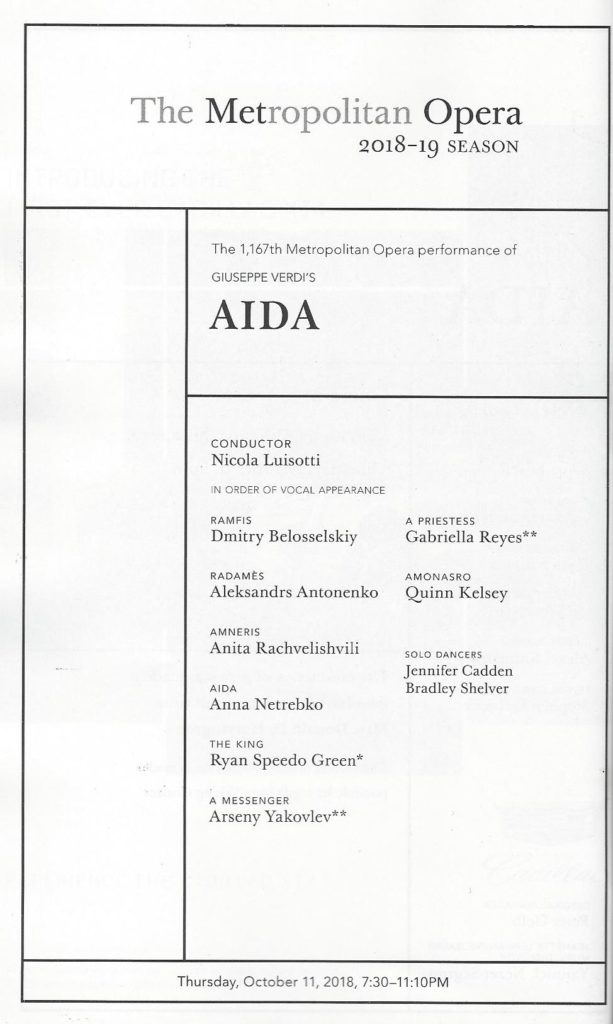 Verdi must have required such a charismatically dominant Aida because his libretto gives the Egyptian warrior-hero to the Ethiopian enemy of the opera’s financial benefactor. Only a dazzling Aida could justify a story snubbing the mythical daughter of Egyptian royalty.

Educated in Paris, and a veteran of many European missions, the Egyptian ruler, Ismail Pasha (1830 -1895), was determined to modernize Egypt when he became the nation’s viceroy.

Pasha vowed to move his country from Africa’s orbit and join that of Europe. And what better symbol of success than a great opera by the greatest composer of all European opera, Giuseppe Verdi, in his new Khedivial Opera House (1869), built to celebrate the opening of the Suez Canal.

But his grandiose plan had to await the end of the Franco-Prussian War, which had stopped all shipments out of Paris. Finally, on Christmas Eve of 1871, Aida made its world debut.

The opera played in a theater designed by the architect Pietro Avoscani. It seated approximately 850 people and was made mostly of wood.

The story of Aida is thought to be the creation of Auguste Mariette (1821–1881), an extraordinary French archaeologist who was the founder of the Egyptian Museum of Cairo., though recent scholarship suggests Mariette stole the plot from his brother Edouard’s novel. Ismail Pasha had requested a brief plot for an opera.  Camille du Locle (1832–1903), director of the original production of Carmen, collaborated on the scenario with Mariette and brought the story to Verdi.

Verdi was seeking a way to challenge the ascendency of Richard Wagner’s idea of opera. Consequently, he created an opera score with great musical diversity and in which the orchestra played a more incisive and significant role.

Aida’s plot echoes that of Wagner’s’ Tristan and Isolde. Like Wagner’s drama, Aida features a to-the-death love triangle drawn from two warring nations, Ethiopia and Egypt. Both countries worship the same God, Amon, and so the royal families of each country have names beginning with “Am”. In Aida the Egyptian princess, Amneris, loves the son of the Ethiopian king, Amonasro. But, the captured Ethiopian slave princess, Aida, loves Egypt’s’ great war hero, Radames, who loves her in return.

In 1908 the Metropolitan Opera chose Aida to debut the new management team led by Giulio Gatti-Casazza. For his managerial debut he imposed sets and costumes from his previous home, La Scala along with the first Met’s first great Aida, Emmy Destinn, and the conductor Arturo Toscanini. Louise Homer sang Amneris and was “naturally at home as Amneris. She has sung it many places. Many of the gestures she made were of themselves graceful, wide-swept and noble, but their precise relation to the emotion that she was seeking to express would be hard to establish. She was in splendid voice and sang with fire and eagerness.”[ii] The Met’s first great Radames was Enrico Caruso who would sing the role in each of his Met seasons except the last two. It was considered his finest role. As one critic noted, His fire is unbounded. He hurls his heart at his listeners.”[iii]  Destinn was praised for “an excellent piece of lyric acting in its reading of the lyric text and in its purely pictorial methods of expression”[iv].

In 1988 Sonja Frisell’s Aida arrived at the Met. For her work, Ms. Frisell received an Emmy Award in 1990 for the television broadcast of the Metropolitan Opera’s production of Aida.

Frisell was a student of the famous director Karl Ebert, who taught her that the truth on the stage has to come through the artists.

You have to get into their minds and convince them of what you want so it becomes theirs.”  The director has no contact with the audience and so must work through the singers.  “In the moment of performance, they must produce truth, and they won’t if they’re not convinced about what you want.

‘I tend to think a composer chose a setting for a definite reason,” she said. ”And I’m convinced that one can make an operatic evening, set in the period the composer designated, seem alive and telling a modern audience. I don’t think transplanting the story is the key to that. I think relevancy is conveyed to the audience through the type and style of acting.[v]

Anna Netrebko proves that assertion. And the opera is a very difficult opera to perform well. Charles Osborne notes,

Despite its thought-deadening familiarity and popularity, ”Aida” is the most difficult of Verdi’s operas to stage. One reason is that the music is so monumental in intent that directors feel impelled, understandably, to mirror its grand designs on the same elephantine scale. No wonder some old productions went all the way and led an elephant or two onto the stage in the Triumphal Scene. The effect may have been laughable but not out of proportion to the music’s view of itself.[2]

The New York Times reviewer of thirty years ago could not more accurately describe the current revival of Aida:

The Metropolitan Opera’s new ”Aida,” which had its premiere on Thursday evening, denied itself elephants but not much else in the monumental tradition. The Metropolitan’s famous stage machinery moved scenes up and down in spectacular fashion, to great applause from elevator connoisseurs. Five horses, a couple of them actually cantering and carrying fearless warriors aboard, were part of the seemingly endless procession celebrating the victory of Thebes over Ethiopia. The lower portions of towering pillars dominated most scenes in this Sonja Frisell production, giving the illusion of enormous scale without the necessity for foreshortening or other distortion.”[vi]

The 2018 revival of her Aida at the Met enjoys the care and love expended by Ms. Frisell and her design team of set designer Gianni Quaranta, costume designer Dada Saligeri, lighting designer Gil Wechsler, and choreographer Alexei Ratmansky. Revival director Stephen Pickover is on hand to make sure their vision is not only preserved by energized. He succeeds wonderfully, and with just two horses.

Ms. Netrebko’s Aida is surrounded by a strong cast. Anita Rachvelishvili sings magnificently but unfortunately acts only from the neck up. The man-caught in the middle, Radames, is sung adequately by Aleksandrs Antonenko who can’t quite pull off a leading man aura. Ryan Speedo Green plays the Egyptian king with total non-emotional solemnity and dignity. He chooses to focus his enormous power on his dramatic voice and resplendent costume. His performance thereby contrasts beautifully with the Amonasro of Quinn Kelsey. His Ethiopian king is very emotional, animated, and a strong vocal counterpart to Mr. Green. Gabriella Reyes’ haunting voice dominates the beautiful ceremony of consecration which ends Act 1. The Met chorus creates a profound sound environment, while conductor Nicola Luisotti conducts the great orchestra with a loving hand and heart.

Anna Netrebko and the revival of Ms. Frisell’s thrilling production testify to the truth of the director’s prophetic statement of thirty years ago:

Opera is losing its sense of what it is by trying to compete with Lloyd Webber musicals. The public doesn’t come to see television on stage. They come to the theater to find something to believe in, not to be shocked and horrified. There’s so much ugliness and hate in life; if we want opera to survive, we must believe in the music, work with and from it, and not try to make it smaller by throwing a lot of detritus on the stage.”[vii]