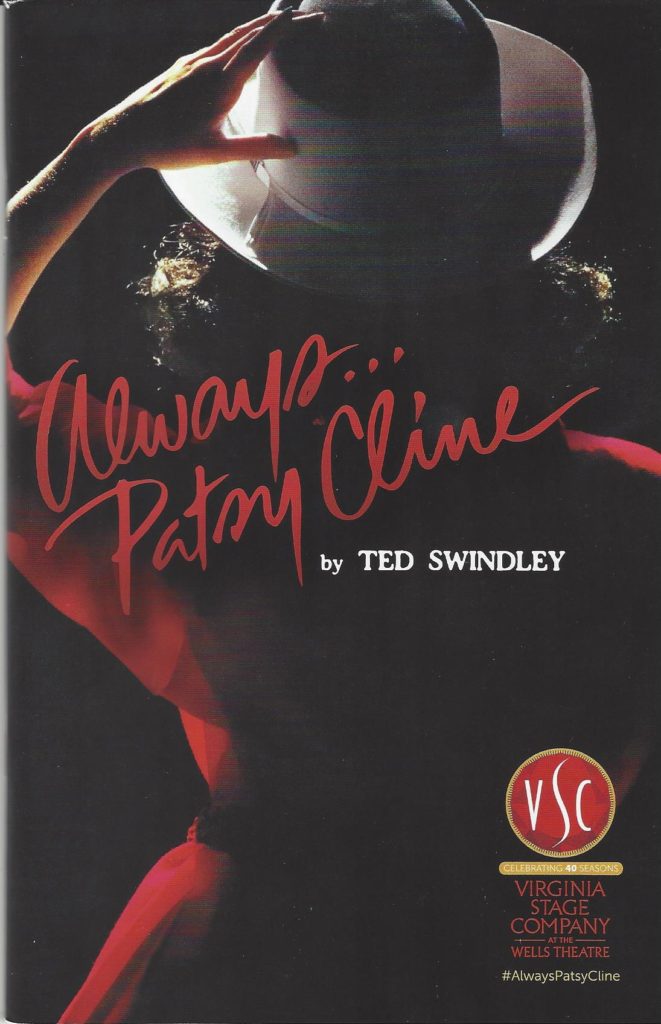 The March 7, 1963 headlines blazoned the news across the front page of the Los Angeles Times:

And it happened just four years after another plane crash took the lives of Buddy Holly, Richie Valens, and J.P. “The Big Bopper” Richardson.

Patsy Cline’s career had lasted a mere six years: from her debut in 1957 until her death at the age of 30.

“the most popular female country singer in recording history, Cline is invariably invoked as a standard for female vocalists, and she has inspired scores of singers including k. d. lang, Loretta Lynn, Linda Ronstadt, Trisha Yearwood, and Wynonna Judd. Her brief career produced the #1 jukebox hit of all time, “Crazy” (written by Willie Nelson) and her unique, crying style and vocal impeccability have established her reputation as the quintessential torch singer.”

The Virginia Stage Company’s production of Always… Patsy Cline is ““a jukebox musical based on the true story of Patsy Cline’s friendship with a Houston housewife named Louise Seger, her most devoted fan.”

After explaining the backstory of her devotion to the singer, the character of Louise narrates the story of the day in 1961 when she met Patsy Cline at Houston’s Esquire Ballroom. After this meeting, the singer keeps in touch with Louise by writing her long handwritten letters until the day she dies.  She signs the letters “(Love) Always, Patsy Cline.”

Instead our youngsters yearn for their first guitar. Everyone records their personal epics for You Tube. Musicians dictate fashion as well as political opinion.

Today our bards sing hymns, not of warriors, but  songs of themselves. Our heroes are troubadours. The musicians who once sang of the hero’s exploits, are now the heroes themselves. As protagonists, they, unlike their historical predecessors, face no antagonists. Today’s Othello doesn’t have to deal with a contemporary Iago. Today’s Jean Val Jean has no Javert to fear.

As the late great American critic Albert Bermel noted, today’s heroes are psychologically conceived and realized. The modern hero suffers, not because of an external antagonist, but

“because of an inner conflict. Today’s protagonist cannot reconcile the warring impulses from his unconscious. The very conflict in him, that confusion of fears and desires, makes the fears come true. He himself brings to pass what he most dreads, He finally undergoes the losses he had only imagined, and he has only himself to blame.”[i]

The contemporary musician fits Bermel’s bill like no other, as he chronicles every impulse, every desire, every conflict for the world to hear.

Patsy Cline, like Buddy Holly, Johnny Cash, Frankie Valli, Janis Joplin, Tina Turner and other “jukebox” stage heroes, epitomizes the musician as hero. Every title of a Cline song represents a scene in the dramatic arc of her life riding the “Honky Tonk Merry Go Round”

The Virginia Stage Company’s production of Always, Patsy Cline is such a monumentally popular and emotionally satisfying experience that the producers should be calling empty Norfolk theaters, like the Riverside, to arrange a transfer of the show, after the Wells Theatre run, so that every man, woman, and child of Virginia might attend this glorious tribute to one of their own.

The success begins with stage and musical director Amy Jones. She obviously connects with this material in ways she didn’t in last year’s project – Ring of Fire. Every musician, actor, and designer is  first rate, perfect for what Ms. Jones asks them to do.

Linda Edwards plays one of the most difficult type of roles any actor can be called upon to play – the Narrator. She succeeds so well that she makes what she does look easy, the mark of a true artist. Her Louise Seger is what my father would call “the salt of the earth”, a “down to earth” “good egg”. She presents a personality each of us have encountered at least once in our lives, and establishes a strong bond of trust, pleasure, and expectation with each member of the audience. And if that isn’t enough, she can sing as well.

Of all the iconic country musicians Patsy Cline was the most enigmatic. She seemed to live in a zone of her own creation and to phrase particular sounds with a uniqueness which cut to a listener’s very being. (Her rendition of the first phrase of her magnificent “I Fall to Pieces” is a Rorschach test of a person’s very humanity. It can rattle one’s soul.)

Somehow Sandia Ahlers creates, or perhaps channels, that peculiar Patsy Cline magic. She finds a way into and, once there, remains in Cline’s distinctive performing zone, while revealing her evolving character almost exclusively through song. The performance climaxes with “Crazy” sung at Louise’s kitchen table. In Ms. Ahlers hands, as directed by Ms. Jones, the song becomes a dazzling American folk opera verismo aria.

The whole thing is staged on veteran scene designer Dennis Maulden’s lovely functional and flexible concert stage unit setting. Mr. Maulden knows this musical doesn’t need a setting fighting with the music for attention and so his work imaginatively provides a showcase for the musicians’ excellence. The Virginia Stage Company’s resident costumer designer, Jeni Schaefer, turns in one of her most successful efforts. Ms. Cline’s frequent changes are appropriate not only to character but to the show’s variety of times and places. B. Butterbaugh’s lighting subtly follows the emotional keys as they ebb and flow, across and around, the multileveled stage. The sound provided by designer Steven Allegretto is perfectly amplified, blended and modulated throughout.

Always, Patsy Cline demonstrates that friendship need not end with death. Rather, friendship cherished, like that between Patsy and Louise, can grow and spread, delighting thousands along the way.