TOI’s HANSEL AND GRETEL: BEAUTIFUL AND FUN AND UNIVERSALLY TRUE 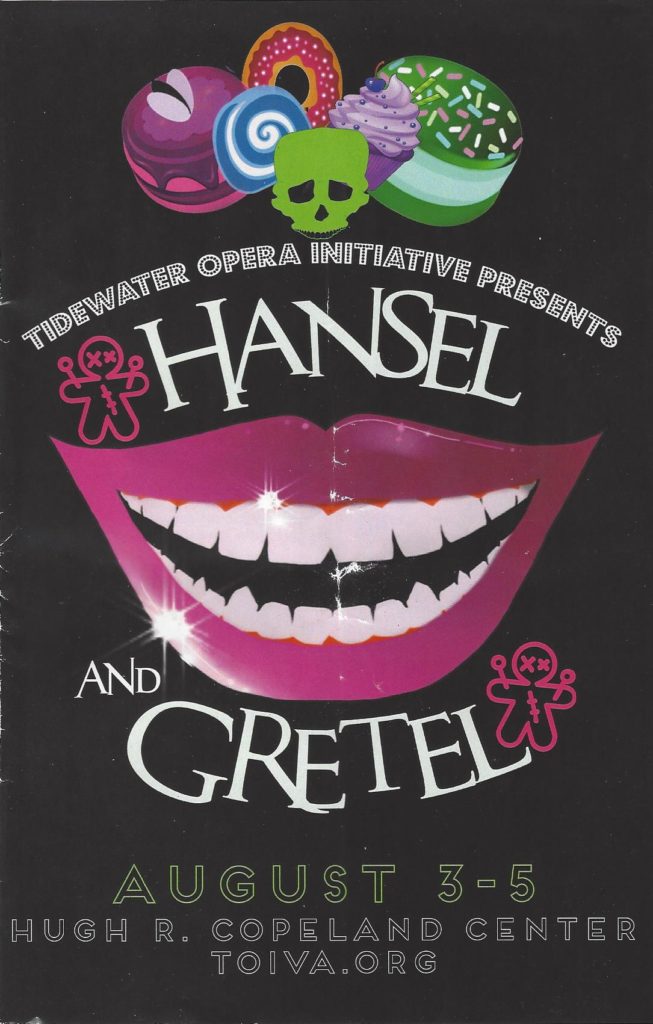 Why a fairy tale?

The Brothers Grimm 1812 tale Hansel and Gretel is the basis for all subsequent tellings of this brother and sister story. Amid a sea of worries and fears, Hansel repeats the main lesson, “Do not cry, Gretel, go to sleep quietly. The good God will help us.”

But this tale was written for 19th century rural Germans. Does it have anything to say to urban Americans in 2018?

In 1890, thirty-six-year-old Engelbert Humperdinck began working on Hansel and Gretel, which would become his most famous opera. He first composed four of the songs to accompany a puppet show that his sister’s children wanted to perform. His sister, Adelheid, liked the songs so much, that she suggested writing a libretto for a full-length Hansel and Gretel production. In her libretto, Adelheid elaborated on the truths of the Grimm fable.

Director Shelly Milam-Ratliff has set Humperdinck’s opera in today’s New Orleans at Mardi Gras time. Teenage Hansel and Gretel work in mom and dad’s failing Bourbon Street Bar. The bar is so on the rocks that dad needs to sell straw brooms! Fortunately, New Orleans is so filled with evil that broom purchases by the local witches alone keep the family afloat. By casting Hansel and Gretel as teens, the production offers the audience a lesson for modern parents enduring adult children living in their basements. Hansel and Gretel are seen weaned away from the safety and comfort of their parental home to discover that they can survive on their own. Hansel and Gretel is an archetypal “coming of age” tale. The teens can only come of age if their mom boots them out, acts “cruel to be kind”.

(Anyone walking to the Hugh R. Copeland Center through the Neon District at night is primed to accept the premise that urban environments can be as scary as a medieval woods.)

But in contemporary New Orleans, as in the Grimm’s German woods, God’s ever-present help is vividly illustrated. Mother prays for help and, almost on cue, dad arrives loaded with food stuffs! The frightened and lost teenagers kneel and pray in the streets of New Orleans and angels (disguised, as often in the Bible) group themselves protectively around the children as they sleep.

Hansel recalls that his mother had had need of a reminder of God’s ever-present protection. Their father’s watchword comforts them: “When one’s grief is past bearing, then Heaven will send relief.”

The Norfolk audience sees this come to pass as surely as audiences have heard and seen it happen for over two hundred years. The truth of the fairy tale is universal – true everywhere, and at all times: God’s protection and provision are available to those who seek Him.

This wisdom is the core around which Humperdinck’s opera and this production, revolve.

The cast of fine singers is wonderfully coached and led by musical director Scott Williamson. Lisa Hogan, a bright light in the Little Night Music of Norfolk’s Little Theater, plays Hansel with spunk and daring. Kathryn Kelly, recently on the other side of the footlights as Little Night Music’s musical director, proves herself more than adept on stage. She sings and acts Gretel with panache. Mother Sandra Kreuger makes a very strong debut. Her mezzo voice is particularly hearty and expressive. Steven Field, fast becoming one of our musical stage favorites, continues to develop and showcase a powerful baritone voice. Mezzo Adriene Kerr creates the witch of all witches with Mme. LeRoux. She is an overwhelming presence as she explodes upon the stage to entice the teens into her bakery of horrors. Kerr’s love of her dastardly lifestyle is infectious and very theatrical. It is a great portrayal of a classic role, one not soon surpassed.

Not to be overlooked are Bridget Cooper as the Sandman and Anyee Farrar as the Dew Fairy. Their voices are simply beautiful, and, though their costumes baffled us, they were stars in their own right.

Any opera is only as good as its chorus. This Hansel and Gretel has a fabulous ensemble made up of Hannah Brochhausen, Christianna Casey, Judah Duncan, Justin Estanislao, Madison Finke, Matre Grant, Angelina Keppler, Natalie Merrell, Jaelin Mitchell, Juliet Ortiz, Gabrielle Pickney, Holly Romanelli, Leah Shewmaker, Ricky Goodwyn, and Kennedy Stone. They perform Christianna Casey’s lively tableaux vivants during the overtures and execute amazing line dances to Humperdinck’s music. During intermission they grace the patrons with displays of their musical gifts. And director Milam-Ratliff has given them some truly clever bits of stage business throughout. We especially liked their simultaneous reactions to their Flat Stanley-like voodoo dolls’ torments.

All of this is wonderfully and professionally accompanied by pianist Kelly Vaughan.

Another universal truth demonstrated in this Hansel and Gretel is one that exists but often goes unseen in the real world—the wrongdoer is severely punished for her misdeeds, There is justice.

As Hansel repeats throughout the tale, “God will not forsake us.”

The opera once again lays out the Christian worldview of life.  The Tidewater Opera Initiative’s Hansel and Gretel underlines the reality of suffering, courage, fortitude and salvation—all crucial, inescapable components of human existence. Humperdinck’s operatic world, whether set in rural Germany or urban America, is a mirror image of the world in which we live.  There are acts of violence and evil all around us all the time.  Counteracting this are the continual acts of chivalry, bravery, kindness and courage everywhere, all the time.  Our world, like the world of Hansel and Gretel, is brutal and ugly at times, but the ugliness makes the beautiful and the noble more glorious to behold.