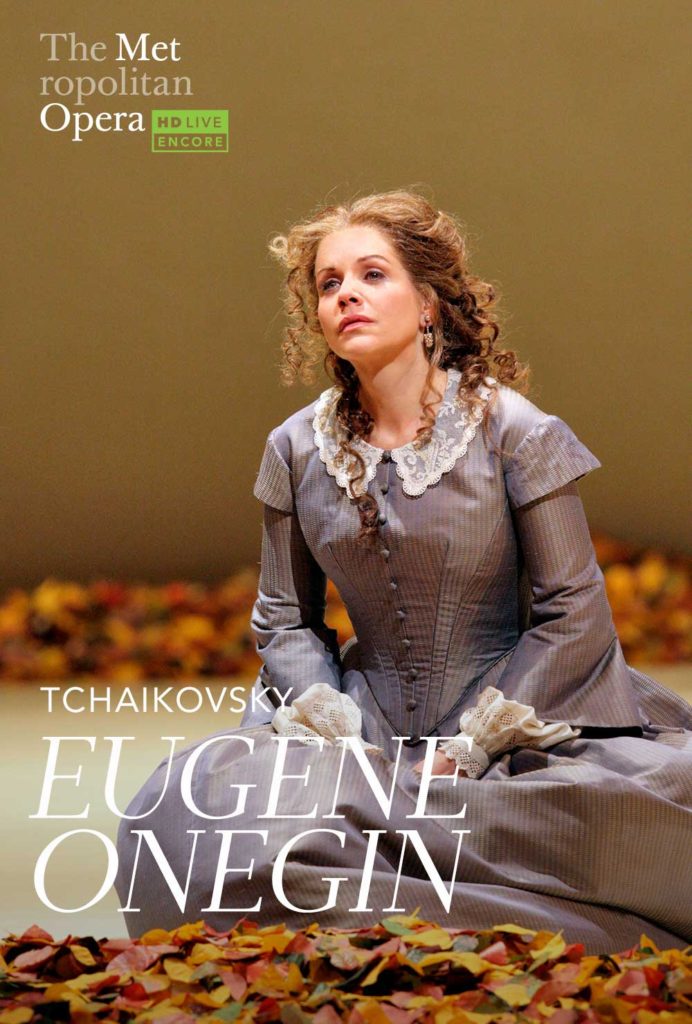 Tchaikovsky didn’t care if his new opera was any good.

You may well be right in saying that my opera, [Eugene Onegin], will not be effective on the stage…I have no dramatic vein, and now I don’t worry about it…I wrote this opera because I was moved one day with the unutterable force to express in music everything that seems to cry out for music ‘in Pushkin’s great verse novel, Eugene Onegin.[i]

Pushkin’s masterpiece is the tale of a teenage girl, Tatyana, who falls in love with a young worldly man, Onegin, writes a letter confessing her love, but is rejected by him. Some years later he returns, sees the mature Tatyana, who is now married to an elderly and adoring husband, and falls in love with her. He forces a meeting on her but, confessing she still loves him, she refuses to be unfaithful and, though distraught, rejects her would-be lover.[ii]

So engulfed in Pushkin’s tale of young Tatyana’s heartbreak at the cold heart of Onegin, the composer vowed that he could never, and would never, behave as Onegin, should the chance occur.

As fate would have it, the chance did occur:

In the early or middle part of May 1877 I received a long letter containing a declaration of love…At this very time I was much occupied by the thought of Eugene Onegin as an opera, and particularly by the character of Tatyana[iii]

So, Tchaikovsky went to visit the young woman, Antonina Miliukova.

He married her shortly thereafter.

While Tchaikovsky’s marriage was a complete disaster, his opera, or as he insisted on calling it, Lyric Scenes in Three acts, went on to become one of the world’s greatest operas.

To counter criticism that his work was unfaithful to Pushkin, the composer maintained  that his lyric scenes were simply glimpses of the novel.

If, as you maintain, opera is dramatic action, and there is none in my Onegin, then I am ready to call Onegin not an opera but whatever you want.”[iv]

Tchaikovsky trusted that his audience would fill in from memory the parts of Pushkin’s tale left out of his libretto. His biographer notes that

Each of Tchaikovsky’s seven scenes presents only one incident from Pushkin’s verse novel, but Tchaikovsky felt he could safely confine himself to these, for a Russian audience would know the full story and be able to place them in context.”[v]

Russians have no trouble doing this. Pushkin’s work stands as the foundation of all Russian literature. However, the work is virtually unknown in the non-Slavic speaking world. And translations were few and of inferior quality.

Now, however, a translation worthy of the work is available to English readers and opera goers. Oxford University Press has published the novel in verse as one of its Oxford World Classics. The beautiful translation is by James E. Falen, a professor of Russian at the University of Tennessee.

To demonstrate the new translation’s value, we can contrast critical opinion with Pushkin’s own description, with regard to the main characters.

A cold dandy filled to the core with worldly bon ton…Onegin’s problem is that his real self has been stifled by the endless acting out of his social role in the St. Petersburg haute comde, and by the strangulation of his capacity for response in a hectic round of superficial relationships and sexual intrigue. Finally, world-weary and jaundiced, he has become incapable of that intensity of feeling that is such an engaging attribute of Tatyana and Lensky.”[vi]

Eugene, of course, had keen perceptions

And on the whole despised mankind,

And since each rule permits exceptions,

He did respect a noble few,

And, cold himself, gave warmth its due.[vii

Olga is as gregarious as Tatyana is recluse, easily establishing superficial social relationships of the kind Tatyana shuns, yet quite incapable of the sort of deep and abiding love such as her sister conceives for Onegin.”[viii]

But Pushkin provides the definitive picture of Tatyana:

So she was called Tatyana, reader.

She lacked that fresh and rosy tone

That made her sister’s beauty sweeter

And drew all eyes to her alone.

A wild creature, sad and pensive, Shy as a doe and apprehensive,

Tatyana seemed among her kin.

A stranger who had wandered in.

She never learned to show affection,

To hug her parents – either one;

A child herself, for children’

She lacked the slightest predilection,

And oftentimes she’d sit all day

In silence at the window bay.[ix]

But dolls were never Tanya’s passion,

When she was small she didn’t choose

To talk to them of clothes or fashion

Or tell them all the city news.

And she was not the sort who glories

In girlish pranks; but grisly stories

Quite charmed her heart when they were told

On winter nights all dark and cold.

Whenever nanny brought together

Or games of tag upon the heather;

For she was bored by all their noise,

Their laughing shouts and giddy joys.[x]

Pushkin’s Tatyana seems to live beside Shakespeare’s “Kate, the cursed’ and Ibsen’s Hedda Gabler,  loners cautiously waiting for Mr. Right, while working to keep their Furies, their female deities of vengeance, under control.

Many stage  interpretations of Tatyana tend to resemble Pushkin’s description of Olga:

As gay as morning’s rosy dress,

Like any poet—open, caring, As sweet as love’s own soft caress;

Her sky-blue eyes, devoid of guile,

Her flaxen curls, her lovely smile,

Her voice, her form, her graceful stance,

Oh, Olga’s every trait…. But glance

Her portrait there; it’s charming, true;

I liked it once no less than you,

But round it boredom seems to hover;[xi]

The encore presentation of the Metropolitan Opera’s production of Eugene Onegin provides an opportunity to review the various Onegins, Tatyanas and Olgas. The Met production was directed by Robert Carsen, with sets and lighting by Michael Levine, so it visually duplicated the production presented by Chicago’s Lyric Opera in 2017 with Ana Marie Martinez as Tatyana, Mariusz Kwiecien as Onegin, and Alisa Kolosova as Olga. The New York cast featured Renee Fleming as Tatyana, the late, great Dmitri Hvorostovsky as Onegin, and Elena Zaremba as Olga.

In performance, Ms. Fleming never seems as bored as Pushkin paints the character,and, displays no hint of the wildness or sadness Pushkin observed. Instead Ms. Fleming’s Tatyana is a lovely tentative young girl, restless, preferring to be alone with her thoughts and books. Hvorostovsky’s Onegin does not seem to despise mankind, as Pushkin asserts he does. Rather, his Onegin seems spent, empty, a shell of a man, not quite sure what to do with himself. Elena Zaremba’s Olga seems older and more mature than her “older” sister Tatyana. She doesn’t seem one to  play with dolls or hurry up a game of tag.

Fleming’s Tatyana excels in the scene in which she suffers under Onegin’s humiliating schooling in response to her letter. And of course, Ms. Fleming can sing with the best, a true opera heroine.

Hvorostovsky was born to play Onegin. His appearance and demeanor alone could easily cause any young girl to fall in love with him. His carriage and glorious voice would seal any romantic deal.

Valery Gergiev’s conducting was by far the most sensitive and dramatic of the three engagements we have seen. Orchestra and singers seemed mesmerized by his every finger movement.

While every soprano reveals a new and important facet of the mysterious Tatyana, in light of Pushkin’s descriptions, I m inclined to say that the interpretation given by Anna Netrebko comes closest to the one given in the poetic novel. As a native Russian, she alone seems the kind of girl to sit listening to grisly stories on a dark winter’s night. She captures both the haunted and the fierce interior of Pushkin’s tragic heroine.

Eugene Onegin is one of a handful of operas one never tires of experiencing. As Tchaikovsky’s biographer David Brown concludes, it is the composer’s “masterpiece” among masterpieces.