LA SCALA’S GIOVANNA D’ARCO: When an Opera is a Lie 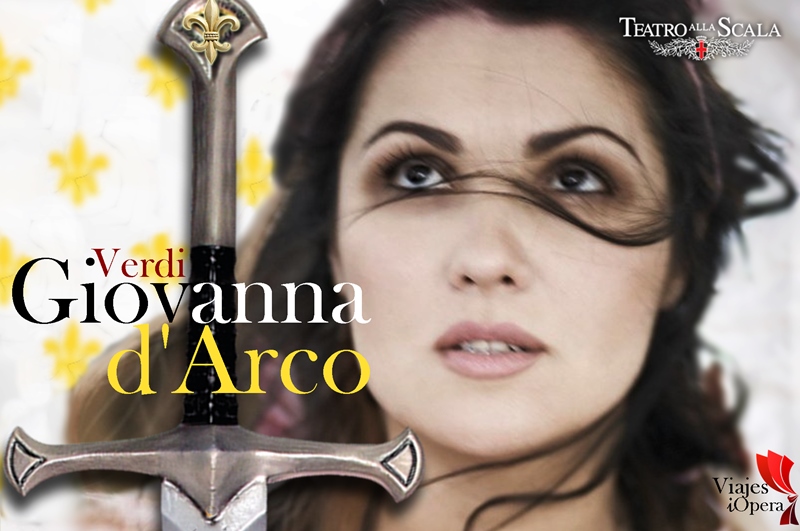 As of 2009, ten percent of Americans thought Joan of Arc was Noah’s wife.[i] Since then most people probably won’t even guess as to her identity.

And where could they learn of Joan of Arc? Schools, where any hint of Christianity is outlawed? In mainline churches, where scientific rationalism filters the majesty and mystery of God?

Certainly not on the stage, where Christian subjects are targeted for radical “reinterpretation” and outright disdain.

The opera is a prime example of how the great works of the musical canon are butchered due to their core Judeo-Christian worldview.  For example, in 2015 Roland Schwab staged Arrigo Boito’s Mephistofele as a nightmare of Christian insanity. The most recent American presentation of Verdi’s Giovanna d’Arco occurred in 2013 as the Chicago Opera Theater presented a “disastrous, crass, offensive, and embarrassing” production. Verdi’s magnificent work was “reframed’ as the product of a contemporary “radical fundamentalist Christian SECT” whose members held the Harris Theater patrons hostage[ii].

The story of Joan of Arc, to the uninformed, became defined as the story of a Christian extremist making innocent people suffer.

If you don’t like that “interpretation” of St. Joan you might try the latest incarnation by the Tweedledee and Tweedledum of avant-garde opera directors, Moshe Leiser and Patrice Caurier. Back on stage after a 150-year absence at Teatro all Scala, you wouldn’t recognize the story or the opera..

With it, via the newly-released DVD, you will learn that Verdi’s opera is about an institutionalized Victorian woman suffering from severe delusions revolving around her identification with St. Joan. Of course her problems, and by extension, the saint’s, are due to some version of sexual repression or projection or some such Freudian folderol.

This is what contemporary citizens are learning, not just about Saint Joan, but about the opera of Giuseppe Verdi.

Inspired perhaps by Charlotte Perkins Gilman’s short story The Yellow Wallpaper, the young woman first appears onstage alone in a hospital bed in a homemade medical facility. Like Gilman’s woman, this woman soon begins to see figures in her wallpaper, but these figures turn out to be the men and women of medieval France warring against the invading English. Soon the armies burst into her room. When she eventually  speaks and sings she will speak the words attributed by the librettist Temiscole Solera to Giovanna.

Calmly sitting through all of this is an older man in a wing back easy chair, perhaps a doctor/father figure who will speak the words attributed to Giacomo.

Soon “Giovanna” is visited by someone claiming to be Carlo VII, king of France. He appears to be the son of Frank Morgan’s Tin Man of Oz (the gold metal costume and body makeup are clearly inspired by the original costume by Adrian), and Shirley Easton’s golden Jill Materson from the James Bond Goldfinger film. He will later mount an equally golden carousel horse, only to sink and rise, willynilly, into a stage trap.

Inspired by all around her, “Giovanna” shreds her already ragged hospital gown into a medieval tunic and borrows Carlo’s’ helmet and breastplate.

No diva has ever been made to appear more hideously woebegone than the great Anna Netrebko is here. On stage, she looks nothing like the attractive publicity still for the opera. Instead, it seems the production’s goal was to turn her into an inmate right out of Peter Weiss’ Marat /Sade. Unfortunately for everybody, they succeed too well.

Just before the intermission, “Giovanna” decides to “go home”. She takes off her makeshift armor and dresses in a Victorian walking suit, only to end up looking like Gertrude Stein. The ‘genius” directors conclude “to go home” means that “Giovanna” wants to kill herself. So, they have her find a convenient knife. But just as she is about to slit her throat (didn’t you know this was part of the well-documented history of Saint Joan?) King Carlos asks “Giovanna” to kill him as well. Instead they retire to the hospital bed which has remained, and will remain, on stage throughout the opera. There the king begins to maul “Giovanna”–Gertrude Stein being groped by the Tin Woodsman! Suddenly, out of nowhere, appear a posse of grotesque monsters right out of the film Angels and Demons to cheer on the sexual assault. Mercifully the act concludes.

Act II features the surprise, and unlisted appearance by Jesus Christ, seemingly fresh from his crucifixion. He enters solemnly, carrying his enormous cross, wearing northing but a loin cloth. He hands off the cross to “Giovanna”, as if it were a baton in a sacred relay race. He exits, wishing “Giovanna’ well for her quarter mile stint.

As written, Verdi’s opera is musically and dramatically complex. An audience member needs to remain attentive to the libretto’s words and music to understand and appreciate what is unfolding.

Leiser and Caurier have rendered this task impossible by plastering over Verdi’s beautiful story with their own misbegotten Victorian psychodrama, which has nothing to do either with Verdi or St. Joan. Their “creative contributions’ serve only to mystifyingly distract from the real reason the audience has assembled – to hear Verdi’s rarely great music  performed by the finest voices.

Pity the poor musicians and vocalists. Anna Netrebko is perhaps the finest dramatic soprano working today. Yet even she seems bewildered as to who she is, why she is there, and what she is doing.

Someday the great vocal talent of the world will refuse to work under such sophomoric and absurd conditions. And their audiences will support their decision with “bravos”.

Ezra Pound called art “news that stays news.” The directors of this production have tampered with both the “news” of St. Joan and of Verdi. It can no longer, as Shelley hoped, teach the human heart the knowledge of itself.

Because the work on the stage is a lie about both St. Joan and about Verdi’s opera.