THE MET OPERA’S IL TROVATORE: THE TRAGEDY OF VENGEANCE 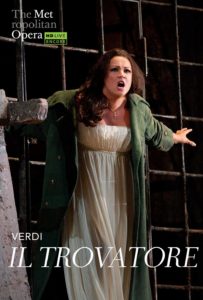 Giuseppe Verdi’s Il Trovatore is probably best known as the center of the Marx Brothers great film comedy A Night at the Opera. Ridicule, parody, burlesque and satire have followed the opera almost even from composition.

Based on the classic Spanish Romantic drama El Trovador by Antonio Garcia Gutiérrez, librettist Salvadore Cammarano sent Verdi a modified version, only to have it quickly returned with the note that Verdi would rather not adapt the play into an opera than abandon “all the novel and bizarre characteristics” of the play. Thus, the plot retains all of its infamous absurdities.

The plot is so bizarre that it is almost impossible to explain what happens in the story to a person not already familiar with it. Even then, one finds oneself at a loss to keep all the odd ducks in any kind of a coherent or believable  row.

If not the plot, then it is Verdi’s masterful music which has made the opera an international favorite from its very first performance. In fact, the great tenor Enrico Caruso, the Metropolitan Opera’s first Manrico, famously observed that all Verdi’s opera needs for success is the four greatest singers in the world. Joseph Volpe, former director of the Metropolitan Opera agreed, elaborating that “the opera requires above all a Manrico on the order of such all-out dramatic tenors as Caruso and Giovanni Martinelli.”[i]

Fortunately, the Sir David McVicar version which opened in 2009, aired  live in 2015, and reprises this summer, has just such a quartet in the Leonora of Anna Netrebko, the Manrico of Yonghoon Lee, the Azucena of Dolora Zajick, and the towering Count Di Luna of the late Dmitri Hvrostovsky.

McVicar’s Trovatore is beautiful to watch and fast-paced. It illustrates the comment made by the 19th century Viennese critic Eduard Hanslink who said the characters arrive on stage as if shot from a pistol. McVicar’s entire mise en scene is inspired by Goya’s monumental painting, “The Third of May 1808”, depicting the rival forces of the Spanish resistance to Napoleon’s invasion during the occupation of the Peninsular War. The chosen setting works beautifully, allowing stretches of the libretto’s wild  imagination to live comfortably in a beautiful historical era, where the brothers’ rivalry is echoed in the opposing armies.

The setting by Charles Edwards serves primarily as a lovely background for Brigitte Reiffensttel’s elegant costumes. Choreographer Leah Hausman and fight director Thomas Schall keep the action, which could become static without conscious and imaginative effort, moving with power and meaning. Jennifer Tipton’s lighting subtly narrows the focus when appropriate, only to widen the scope to reveal the panorama of life. Conductor Marco Armiliato seems to enjoy the music as much as his audience as he leads us through some of the most compelling arias, duets, and trios ever composed.

But it is the four actors who are the rightful stars. Korean tenor Yonghoon Lee as Manrico nails a pair of the character’s whopping high Cs in “Di quella pira.” For almost twenty-five years Dolora Zajick has been making believable the hystrionic gypsy hag, once a common and feared personage throughout Europe. Her portrayal is the gold standard for the role. The baritone Dmitri Hvrostovsky’s Count De Luna summarizes why the opera world went into mourning so passionately following his untimely death from brain cancer. His performance is heroic on many beautiful levels.

Finally, Anna Netrebko once again defies expectations and produces a remarkably poignant portrayal of Leonora. Amid the swirl of vengeance and blood- lust, one might have expected Ms. Netrebko to utilize her wide and deep reservoir of dark passions. But no. Her Leonora is the picture of demur piety, traditional female subservience,  and devotion. She is an island of peace in a sea of vengeance-seeking blood. While all around her make decisions based on how best to hurt another, she alone offers the selfless and Christ-like, “Dirgli potro, morendo; Salvo tu per me!” (“I die so another may live.”) So deferential to others is Ms. Netrebko’s stunning characterization that she plays her silent duet with Manrico with her back totally to the audience. The late great innovator of improvisional acting Viola Spolin would applaud her “Acting With the Back Alone” mastery. Ms. Netrebko transforms Manrico’s aria to a memorable moment all about her own profound listening.

Leonora breaks the story’s cycle of vengeance begetting vengeance with a simple and quiet act of sacrificial love.