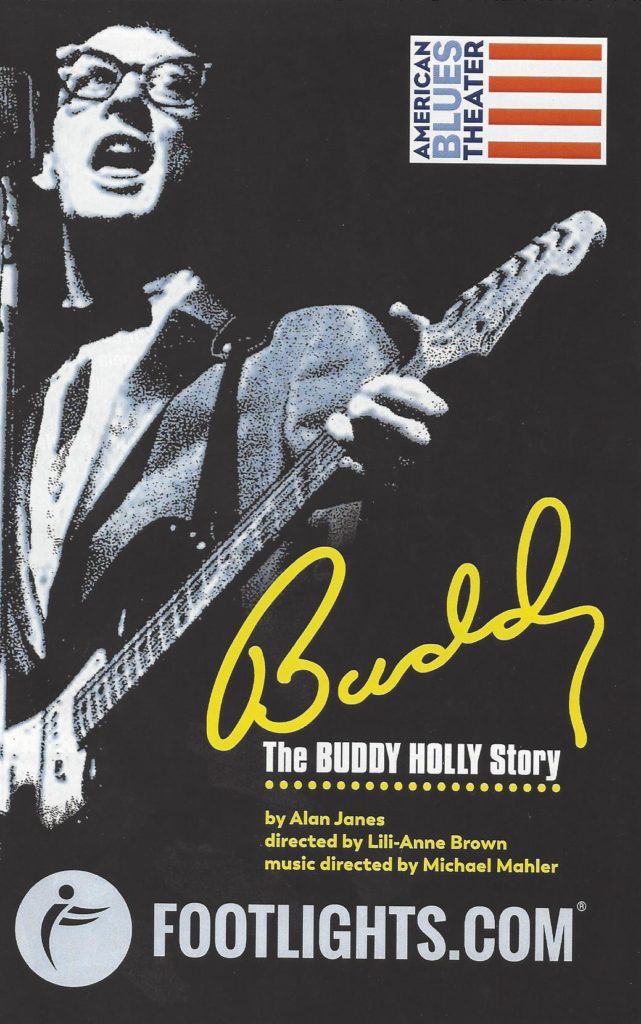 Buddy Holly was my favorite rock and roller and first hero.

As an eight year old boy with a single bud headphone from his transistor radio I waited for Buddy’s music to come on after I went to bed.

We shared a common trait  – glasses. In the days before contact lenses, we “four-eyes” were a small group of elementary school nerds and Buddy Holly was our hero. Not only did he wear glasses, he wore big black glasses to dare the world to knock them off.

The day three years later when I read that he had died in an airplane crash in the tundra of Moorhead, Minnesota was one  sad day.

Fourteen years later I started teaching at Moorhead State College, where several of my colleagues had been waiting at the concert hall for Buddy only to learn of his death. They were still, after all those years, all shook up. We bonded through Buddy

So, after loving Million Dollar Quartet, Ring of Fire, and Motown, I looked forward with unusual anticipation to Buddy. The Buddy Holly Story by Alan Jones playing at Chicago’s American Blues Theater. Like the “jukebox” musicals subsequent to Buddy, the audience enters already humming the tunes.

The Chicago production does not disappoint; it is all one could hope for or want.

The show is carefully structured by writer Alan Jones to present the simple biography of the influential singer-songwriter, intermingled with performances from throughout Holly’s brief career. The story depicts Holly’s beginnings as a gawky, bespectacled singer performing country music in his hometown of Lubbock, Texas, to his days with the Crickets and his short, two-year rise to stardom.

The emotional high point of the show is a re-creation of Holly’s last concert at the Surf Ballroom in Clear Lake, Iowa, in 1959 with Ritchie Valens, J.P. Richardson, known as the Big Bopper  just before the airplane crash that killed Holly, who was only 22 years old, Valens and the Bopper

The American Blues Theater’s Buddy Holly is perfect in every way. He has the sass, the heart, and the chops to channel my childhood hero.  Zachary Stevenson has been staggering audiences with his rendition all around the world, so I am not alone in my homage to him. To watch him is to be in “hog heaven”, as they say. As John Wayne said in “The Searchers”, and as Buddy Holly sang, “That’ll Be The Day” when a better production than this one comes along.

But, as only Chicago can, the cast around him is filled with all-star performers in their own right. For example, Vi Petty is played by Virginia’s Liz Chidester, a graduate of James Madison University. Scratch below her bio, and you will find that she knocked Chicago for a loop not too long ago in Victoria Bussert’s landmark production of the musical Lizzie. Ms. Chidester just happens to play the best boogie-woogie rock and roll piano since Lance Lipinski played Jerry Lee Lewis in Million Dollar Quartet.

The cast is full of similar stars playing supporting roles. Chuckie Benson and Angela Alise, for example, stop the show during their Apollo Theater rendition of the Isley Brothers’ “Shout”. And you have to look real closely to realize that Cisco Lopez isn’t actually Ritchie Valens or Vasily Deris The Big Bopper, they are that good.

The audience did not want to leave: a world away from Buddy Holly and the amazing Crickets (Michael Mahler, Kieran McCabe, and Shaun Whitley) seems like cruel and unusual punishment.