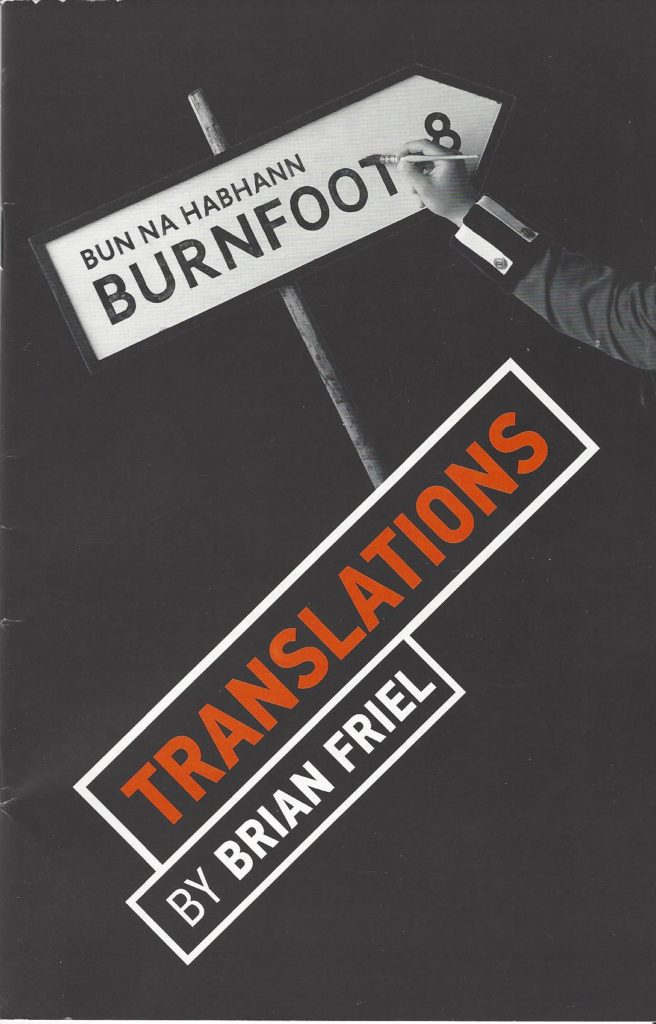 Set in rural Ireland in 1833, Brian Friel’s’ Translations explores the troubles brought to a handful of characters following the return of a prodigal son.  Whereas the prodigal in Christ’s parable returned ashamed and broken, Friel’s prodigal returns home proud and puffed up.

Maire, a local maiden, has long been betrothed to Manus, the oldest son of the local school master, Hugh. But she yearns to escape the stultifying culture of the village of Baile Beag.  To jolt her fiancée into action, Maire has announced a plan to move to America. Owen, the runaway prodigal son, returns with both a scheme and a new best buddy, Lieutenant Yolland of the British army. Owen, called Roland by the British, intends  to act as a translator for the Royal Engineers. However, Owen’s pal falls in love with his brother’s girl, and she for him. Yolland sets off to learn Irish so he can woo Máire.

But Yolland goes missing. At the same time, a broken-hearted  Manus flees, and even turns down a rare job-offer. The English military search for Yolland, rampaging across the countryside, and threatening to shoot all livestock if Yolland is not found immediately, then to evict the villagers and to destroy their homes if he is not found within forty-eight hours.

Christ’s Parable of the Prodigal Son forms a precise  icon of repentance. Friel’s Drama of a Prodigal Son reflects  the opposite filial image and result.

For Christ, sin is exile, and enslavement to strangers is the cause of hunger. Owen, on the other hand, returns from exile sated, and embarks upon work which will, in time, enslave his people to their English overlords. Christ’s story of repentance presents a return from exile to our true home, to receive back our inheritance and freedom in the Father’s house. For Owen, return will mean destruction of his home, the extermination of his Irish inheritance, and the surrender of Irish freedom.

Unlike Christ’s prodigal Son, Owen never repents, never seeks forgiveness. At the end of Translations, both Owen’s heavenly father and his earthly father still wait his soul’s return. Friel’s Translations shows a world where the activities of people are disconnected and not ordered toward the fulfillment of God’s divine purpose for life. It is a world of incoherent pursuits, of illusory strivings, of craving for foods and drinks that do not satisfy, a world where nothing ultimately makes sense, and a world engulfed in untruth, deceit and sin.

Friel’s drama ironically echoes Christ’s message: There is no cure for the evils of our age unless we return to God. The world in which we live is not a normal world, but a wasteland. This is why the Orthodox Christian Church adds the reading of Psalm 137 to the Matins service for the Sunday of the Prodigal Son.

By the streams of Babylon we sat and wept as we remembered Zion. On the willows we hung our harps, for how could we sing the Lord’s song in a strange land.

The same lament will soon fill the small Irish village of Translations. As the great drama critic John Simon noted, Translations has a final scene “unpleasantly reminiscent of an O’Casey ending: little people drunkenly or self-absorbedly unaware of the tragedy in their midst.”[i]

The town’s elder and school teacher Hugh shares Friel’s attitude. He neither accepts a futile allegiance to the old Gaelic traditions (the position of his son Manus), nor does he approve of converting to the culture of the colonial power (the position of Owen and of writers like Shaw and Wilde). Nor would he choose the route of exile or emigration (the choice of Maire in the play and of Joyce and Beckett in their own lives). Instead Hugh and Friel will remain in Ireland and re-appropriate the English language for Irish culture.

Hugh, a role once played by the great Barnard Hughes, says at one point that “it is not the literal past, the ‘facts’ of history, that shape us, but images of the past embodied in language. . .. [W]e must never cease renewing those images; because once we do, we fossilize.” The role is played wonderfully by the great actor Bradley Armacost. In fact, hearing that Mr. Armacost would be in Washington D.C. to play in Translations caused us to travel to the Studio Theatre to see the production, so fond were we of his performances in Chicago.

Mr. Armacost’s impressive performance is unlike any we have seen him offer previously. Armacost’s widower Hugh balances his position as the wisest man in Baile Beag and chief educator with his own personal torment regarding his sons. He has maimed his eldest as a baby and, to compensate, spoiled his youngest. Parenting is not his strong suit. Instead, the classical education system he supervises is his pride and joy.

Mr. Armacost’s Hugh is matched by the Jimmy Jack Cassie of Martin Giles, an old unwashed town bachelor happiest among the Greek gods and heroes of mythology. Mr. Giles’ second act monologue on “companionship” is a heart-breaking highlight of the production. The sentiments could easily have come from the pen of Samuel Beckett. Together Armacost and Giles create a pair of erudite pals in the great Irish tradition of O’Casey’s Captain Jack Boyle and Joxer Daly.

The entire cast is remarkably strong. Matthew Aldwin McGee’s Manus wins us over in the first few seconds of the play. The relationship between him and the speech-challenged Sarah (Megan Graves) raises the interesting possibility that Sarah took Yolland out of the picture so that her dear Manus could have clear romantic sailing to Maire. Molly Carden plays Maire with a truthfulness and grace which, in less experienced hands, could have become Maureen O’Hara’s Mary Kate Danaher in The Quiet Man. Kudos to her for negotiating that minefield successfully and beautifully. Joe Mallon’s Doalty and Caroline Dubberly’s Bridget present a charming earthy couple of young Irish folk with zest and conviction. Erin Gann manages to make the young Owen endearing despite the end his return will produce for his home village. He is full of good intentions and totally oblivious that he is the tour guide on the road to Hell. Cary Donaldson captures Lieutenant Yolland’s goofy innocence and romantic fascination with all things Irish very well.  Jeff Keogh plays Captain Lancey as the perfect cousin of Jason Isaac’s Colonel Tavington in The Patriot. Dialect coach Nancy Krebs’ work is impeccable.

The production elements match the high performance level. Director Matt Torney paces the action well and moves the actors purposefully and with ease. The setting by Debra Booth, the costumes by wade LaBoissoniere, and the lighting by Keith Parham are all of a piece, a wonderful testimony to how exciting true collaboration can be to watch on stage.

Christ’s Parable of the Prodigal Son gives us a glimpse into the divine grace which provides our entry to the Kingdom of Heaven. Brian Friel’s story of a prodigal son illustrates how a returning son’s good intentions, without repentance, might inadvertently usher in a Kingdom of Hell.