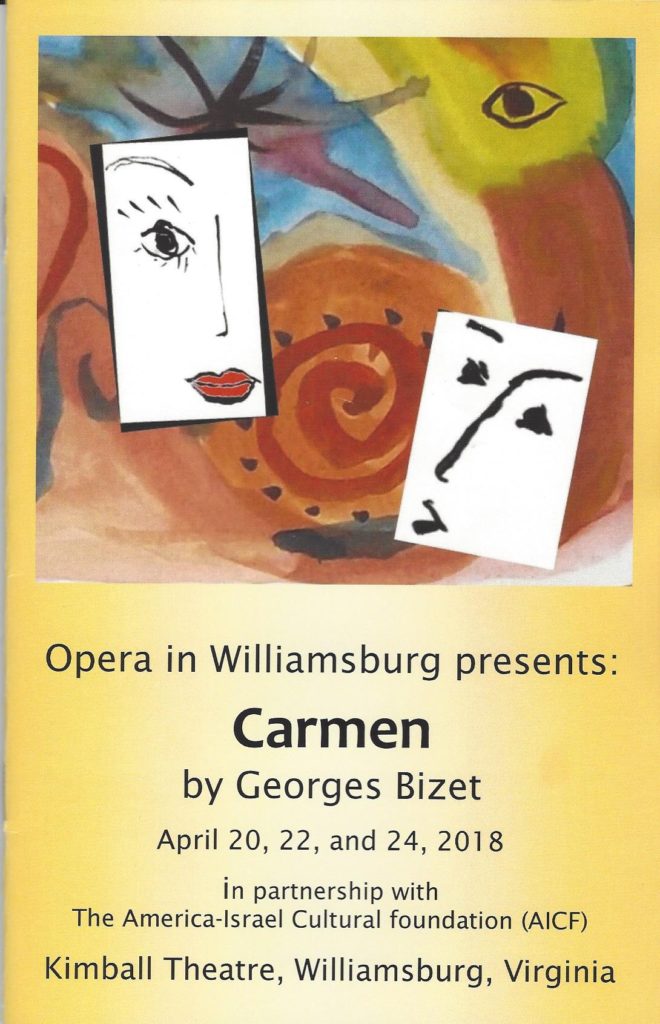 Following a decade of teaching Biblical Hebrew to college students, one should welcome retirement as a time to catch one’s breathe and enjoy the easy things of life.

Not so for Naama  Zahavi-Ely.

Professor Zahavi-Ely decided that her retirement needed her to found a new opera company. At a time when the most established opera companies are floundering as their demographic base dwindles and funding dries up, the good professor decides to take on a pastime suited more for a Cervantes’ hero than a woman in retirement.

But after only six years her Williamsburg Opera has achieved remarkable success!

If the production of Carmen is any measure of the company’s achievement, the Williamsburg Opera produces opera music – both instrumental and vocal – which is at least good and often very good (Lisa Chavez’s Carmen, Eric Fennell’s Don Jose, and Elinor Sohn’s Micaela). As a mark, the wonderful Simon Lapointe of the Ambrosia Quartet and Virginia Symphony played first violin in the fourteen-piece jewel-box of an orchestra assembled for the Bizet classic!

And the public is interested in the Williamsburg Opera. The Sunday matinee of Carmen was sold out. People crammed into the bland Kimball Theatre on a lovely afternoon just to hear this work – a tribute to what Professor Zahavi-Ely has created.

Even the opera’s small roles were sung with pronounced effect. Yuri Kissin’s Escamillo wasn’t the glamorous world-class matador one usually finds in Carmen. Instead he was conceived as a local tough, the bullfight equivalent of Paul LaMat’s hot-rodding John in the film American Graffiti.It was a bold and interesting choice which worked very well. Likewise, Pavel  Sulyandziga’s Remendado, Suchan Kim ‘s Dancaire, Adelmo Guidarelli’s twin portrayals of both Morales and Zunuiga, Elsa Queron’s Mercedes, and Megan Pachecano’s Frasquita were  rounded characters, both energetic and full of Bizet power.

Conductor Jorge Parodi oversaw the proceedings with intelligence and passion.

To continue its remarkable development the Williamsburg Opera must attend to the non-musical elements of opera, called the total art form because opera is not just music. Special directors are needed, directors who know how to assemble a production team of designers who are experienced in creating wonder with very little material; directors who know how to help singers act, to develop complex character relationships in a short period of time; directors who can imbue a few stage properties with powerful significance by the way the actors handle them; directors who have mastered the fundamentals of play direction – composition, picturization, movement, rhythm, and pantomimic dramatization – not just with large scale budgets, but with what the great Polish visionary director Jerzy Grotowski called the “poor theater”. These directors are out there; they just need to be found.

In the meanwhile, Opera in Williamsburg remains a miraculous  product of one woman’s great passion and commitment. It should be saluted and supported.