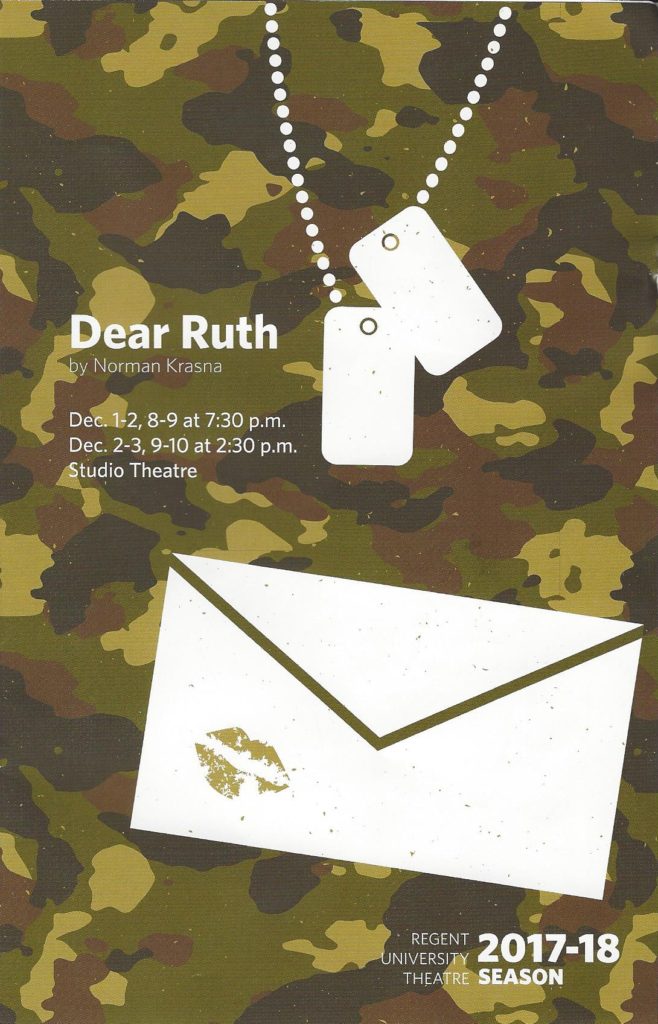 “God moves in a mysterious way”

Since hymnist William Cowper wrote those words in the late 18th century, the phrase has attained a triviality not merited by its truth.

The famous Cowper line is from his last hymn prior to the onset of a struggle with mental illness which included at least one suicide attempt and confinement for 18 months in an asylum. Troubled by religious doubts and fears, and persistently dreaming of his predestined damnation,  his life until death by dropsy in 1800, at age 69, was a living hell.

Cowper’s troubled and painful life did not, however, obscure his faith in all the mysteries of God’s plan for his life. In time, as Cowper himself says, God does make plain his “bright designs”.

The plot instigator of Norman Krasna’s Dear Ruth, playing at the Regent University Theater, quotes the line to take the heat off her backfiring scheme. Her name is Miriam and her sister is named Ruth. Both Miriam and Ruth are Biblical characters whose peculiar decisions, as do their namesakes’, result in God’s plan for glory being achieved – Miriam for her brother Moses and Ruth for her descendant, Jesus Christ.

Similar in type and tone to the Andy Hardy films of the mid-1930s to 1940s, the play and its unsuccessful film sequel, Dear Wife, were the kind of plays and films which brought Americans together. Unlike most of the films and plays of today, Dear Ruth has no agenda, no political ax to grind, no social issue upon which to comment. As a result, it can appeal to the total available audience. At a time when theater audiences are declining, theaters ought to heed Dolly Parton’s advice on political/social issue drama – “If you take a side, you piss off half the country”, and that half will stay at home watching television.  Dear Ruth, like all good and great plays, has only the noble purpose described by the poet Shelly – “To teach the human heart the knowledge of itself”, or as the distinguished critic Robert Brustein puts it in the current issue of American Theatre, “the revelation of the human soul.”

Lewis Nichols of the New York Times raved about the then new play which would run for 680 performances.

Dear Ruth is probably the comedy to end all comedies of juvenile misunderstanding, and last evening no prophet was needed to set down even odds that it will run at least until the end of the next generation. The new play can take its place beside Harvey and one or two others as official reasons for going to the theater.

Teenage Miriam Watkins can’t keep her nose out of other people’s affairs. Fired up by patriotism, Miriam inaugurates a warm pen-pal relationship with an overseas air force officer, hinting at a future marriage. When the airman arrives at their doorstep fresh from combat in Italy, he insists upon seeing Miriam’s older sister, Ruth. It seems that Miriam, to appear older, signed her letters with her sister’s name, and even enclosed her sister’s picture. Ruth, however, is engaged to her nerdy employer and hasn’t a clue as to what is happening.

One of the great functions of college and university theater has been to unearth plays which time has forgotten, but which merit attention. Regent University maintains that tradition with its production of Dear Ruth.

Regent University Theatre’s graduate performance program has, for decades, been an important incubator for, and standard setter of, the region’s theater. Offering a Masters of Fine Arts degree in many of the practical theater fields, Regent theatre alumni have raised the standards not only of the region’s theatrical art but also of the whole country. Everywhere serious theater is to be found, Regent theatre alumni are not far away. The graduate program of Regent has been an entity to be cherished and nurtured, especially at a time when colleges and universities are looking at bottom lines more than at the condition of the human heart. We hope the prominence of undergraduate theater students, however promising they may be, on stage does not weaken the Regent product.