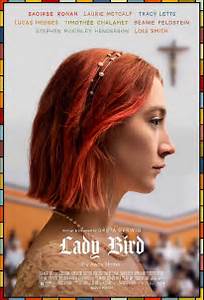 The author was hailed as a “fresh, original, finished talent” who tells a story about a young girl’s “coming of age”, “growing up and the beginning of wisdom,” “no unsavory detail” is omitted in a tale that has “light and air in it, comedy and pathos, and an underlying rhythm pulsing to the flow of humanity itself.”

1943’s A Tree Grows in Brooklyn by Betty Smith, and the 1945 film by novice film director Elia Kazan.

Seventy-four years later, Ms. Gerwig’s drama does what the Smith/Kazan work did. She crystallizes the experience of new generation’s hopes and fear in a work of art which resonates across time and space with universal insights about the human heart.

On its way to the screen, A Tree Grows in Brooklyn began as a novel. But for our age of non-readers the novel stage was skipped by Ms. Gerwig.

Christine “Lady Bird”: McPherson’s  lower middle class Irish girl’s “coming of age” journey out of Sacramento is the 21st century’s equivalent of Francie Nolan’s earlier journey from Williamsburg, Brooklyn. Gerwig’s film of longing and discovery begins in California because the cultural axis has moved from the East coast to the West coast during the past eighty years.

Like the earlier Francie Nolan, Lady Bird McPherson has a brother, a mother struggling to keep the family above water, and a depressed but charming shadow of a father.

The plot is as old as Homer’s Odyssey and as familiar as our own life stories.

Ms. Gerwig’s screenplay is masterfully crafted. No detail is insignificant, no word is extraneous, no image is gratuitous. The casting is impeccable. The great Tracey Letts and Laurie Metcalf embody the archetypal parents of twenty-first century America as completely as Hugh Beaumont and Barbara Billingsly embodied the parental image of post-war television’s Leave it to Beaver. The family’s undercurrent of love is as palpable as the family’s passionate in-your-face fights.

The blistering one-on-ones between Lady Bird and her mother resemble those between James Dean and Raymond Massie in Kazan’s East of Eden. (In fact, Irish actress Saoirse Ronan commands the screen with a camera magnetism akin to that of James Dean himself.)

The brilliance of the casting runs through all of the characters. Lois Smith’s school mistress Sister Sara Jean, Beanie Feldstein’s best friend Julie Steffans, and Bayne Gibby’s[i] Casey, the school assembly presenter, epitomize the care given to every moment of this film.

“Lady Bird” comes from the rhyme of the same name found in literature from Nancy Drew to James and the Giant Peach. The rhyme speaks of Lady Bird’s need to escape from home before the fire inside destroys her.

Lady Bird escapes, and in the process, begins to metamorphose into Christine. With independence a new reality, Christine discovers a growing perspective on her past. The final camera shots by cinematographer Sam Levy harken to the words of Elia Kazan regarding A Tree Grows in Brooklyn, “an intimate, interior story. The outside has to be there, but what is important is that I get the light in that little girl’s eyes, the expression on her face, the feeling in her soul”. [ii]

The shooting script for Lady Bird includes information I did not see in the final film. Too bad.

INT. CHURCH. DAY.
Snippets of a sermon, some donation baskets.The choir gets up to sing “Blessed Assurance.”Christine listens and then cries, hard, and then starts laughing and singing along.
It turns out that her life is just beginning

The lyric for Blessed Assurance set up the final shot beautifully:

Perfect submission, perfect delight
Visions of rapture now burst on my sight
Angels descending, bring from above
Echoes of mercy, whispers of love

Levy’s final camera reveals Christine’s newly radiant merciful eyes. Cicero said that the eyes are “the mirror of the soul”. In Christine’s eyes Ms. Gerwig reveals a lovable young woman ready to embark on her life’s next journey.

Lady Bird is a story as important as that of Betty Smith, and a directorial debut as impressive as that of Elia Kazan.

[i] Ms. Gibby was one of my students.