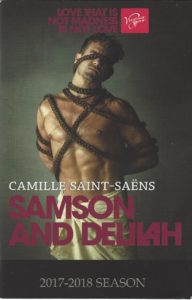 Many historical factors account for the phenomenon. First, during the late sixteenth century, when opera was being developed, the Pope, the Bishop of the Western Christian Church, was one of many Italian nobles vying for power and prestige.  Religious controversies were beginning to shake the social and political fabrics of Europe. The result was centuries of civil war, religious persecution, intolerance, and division. Artists seeking  both  patronage and an audience knew they would do best to avoid religious subjects altogether. Consequently, classical mythology and history provided source material for the opera’s earliest librettists. In time, other material was deemed safe for artistic composition – fairy tales, popular works of fiction (Shakespeare, Goldoni, Goethe, Schiller, Scott, for example) and even, in time, the lives of saints and martyrs.

The specialness, even sanctity, of certain Biblical characters and stories resulted, not in operas, but in the creation of oratorios, accounts free from “sinful” histrionic deception, imitation, or impersonation. The almost Bach-like choruses in SAMSON AND DALILAH‘s Acts 1 and 3, and a Handelian fugue for the Hebrews, remain as testaments to the composer’s original plan to shape not an opera, but an oratorio, from the Biblical material.

Rossini’s Moses in Egypt (1818) and later his Moses and Pharaoh (1827) broke the operatic embargo on Old Testament history, which had, and still has, a special place in Judeo-Christian theology.

Camille Saint-Saens wrote SAMSON AND DALILAH just two years after groundbreaking for the construction of Paris’ defiant Basilica Sacré Cœur, whose design originated on 4 September 1870, not coincidentally the very the day of the proclamation of the Third French Republic.  Bishop Fournier had attributed the defeat of French troops during the Franco-Prussian War to a divine punishment after “a century of moral decline” since the French Revolution. Some quarters saw theater and opera contributing to part of that decline. Hostility between church and state continued around the opera’s composition.

When Paris finally did see Saint-Saens’ work in 1890 at the Theatre Lyrique, a New York Times correspondent noted that the librettist Lemaire “has taken care not to magnify sacred history.” Biblical opera was still produced, and seen, in an atmosphere of social and political tension.

In 1908 America, Oscar Hammerstein took precautions for his Manhattan Opera House production of Camille Saint-Saens’ work. He did not wish to ruffle clerical sensibilities, so he invited 400 clergy to preview the work in Philadelphia. He desired their approval of a production which featured a last act temple dancer named Odette Valery dancing barefooted with a large cobra named Sara, twined around her neck. The clergy gave not only their approval after the show, but also presented the impresario with a gift Bible.

In London, the Licensing Act of 1737 required approval of the Lord Chamberlain before a work based on a Biblical subject could be performed. Consequently, the SAMSON AND DALILAH of 1909 required royal approval to circumvent the Lord’s censorship. The Covent Garden performance was eventually enjoyed by those in the king’s box, including the composer, and international opera stars Adelina Patti and Enrico Caruso.

The trepidation surrounding SAMSON AND DALILAH was because certain Biblical accounts represent, to Jews, detailed, but partial, prophecies of the expected Messiah, and to Christians, detailed, but partial, confirmations of Jesus as the Christ. Many heroes of the Old Testament are seen as “prefigurements,” or foreshadowings of the Messiah, of Christ. Many Biblical heroes and their stories have “typological” as well as historical meaning. The stories of Joseph and Moses are prime examples of “typological figures” foreshadowing the Messiah’s actions.

But perhaps few Biblical types of Christ are as surprising as Samson. The author of the book of Hebrews names Samson among the great heroes of the faith in salvation history, “And what more shall I say? for the time would fail me to tell of Gedeon, and of Barak, and of SAMSON, and of Jephthah; of David also, and of Samuel, and of the prophets:” (Hebrews 11:32).

Saint Ambrose, the Bishop of Milan, began his extended meditation on Samson with this paragraph, “Samson, born by the divine promise, had the Spirit accompanying him, for we read: ‘the Lord blessed him, and the Spirit of the Lord began to be with him in the camp. (Judges 13:25) And so, foreshadowing the future Mystery, he demanded a wife of the aliens, which, as it is written, his father and mother knew not of, because it was from the Lord. And rightly was he esteemed stronger than others, because the Spirit of the Lord guided him, under Whose guidance he alone put to flight the people of the aliens, and at another time inaccessible to the bite of the lion, he, unconquerable in his strength, tore him asunder with his hands. Would that he had been as careful to preserve grace, as strong to overcome the beast!” (On the Holy Spirit, Book 2.5).

The Virginia Opera chorus is up to the task. Chorus Master Shelby Rhoades has assembled a group strong in singing and adept in acting. An indication of the chorus’ strength may be deduced from the number of Tidewater Opera Initiative principals in its midst – Anna Feucht, Erin Hannon, Stephanie Marx, Adriane Kerr, Denise Battle, and Nerissa V. Thompson. The chorus presents a unified group, whether as the People of God, or their own worse enemy, the deranged Philistines, within which individual members subtly display unique character traits without distracting from the larger group function in the drama.

Conductor Adam Turner displays a sure hand and sensitive understanding of Saint-Saens’ oratorio/opera music, and leads the fine Virginia Opera Orchestra along the dramatic peaks and valleys of the tragic story.  Stage director and choreographer Paul Curran keeps the action moving with remarkable creativity and character motivation. His stage pictures and compositions never fail to highlight the appropriate characters and the invented stage business and pantomimic dramatization fill out a very sketchy libretto with interesting insights into the character relationships. His scene and costume collaborator Court Watson solves the stage’s shallowness problem by creating vertical settings, giving ample levels for dynamic stage compositions and movements. Driscoll Otto’s subtle stage lighting with lovely nuanced follow spots aids in creating mood and focus. (The periodic lightening flashes, while effectively surprising, may need clearer motivation.) The fabric choices, colors, silhouettes, and textures are all imaginative and appropriate to the clashing worldviews, set sometime in the unidentified past. The show curtain features an insignia of the Philistine regime, which, prior to Act III, seems to prophetically morph into the burning eye of Saron in The Lord of the Rings. Director Curran and designer Watson clearly differentiate the God-fearing from the degenerate. They are helped immensely by the many wigs and makeups employed by James P. McGough. The famous Act III orgy, capped by a novel aerialist show by Marcy Richardson, is an appropriately foul representation of the Present Evil Age. Unfortunately, at the performance we saw, Samson could only dislodge the regime’s symbol, leaving the towering columns only wobbling. We wanted to see it all wiped out, and the Kingdom of God begin to reign before our eyes.

While Samson is the primary character in the Biblical story, Saint-Saens realized that opera audiences prefer a heroine of either the Villain or Victim type. Katherine Goeldner, (whom we enjoyed in the Lyric Opera of Chicago’s Marriage of Figaro and Eugene Onegin) has a lovely rich voice for Dalilah. And she seduces the old-fashioned way, with promises. She is very effective. Her target is Derek Taylor, a Mel Gibson look alike, playing a Braveheart  role with gusto, pathos, conviction, and a strong voice. Michael Chioldi gave the High Priest of Dagon a lecherous interpretation with his commanding voice. Stefan Szkafarowsky plays the Old Hebrew with a power and a style which made me remember his performance at the High Priest in the Lyric Opera of Chicago’s fine Nabucco. Rubin Casas’ Abimelech is suitably despicable in a compelling interpretation of the role. We almost hated to see him die.

As the People of God continue to struggle in the Present Evil Age, a dramatic work proclaiming that faith in God has, and will, prevail is a welcome addition to any cultural scene.

Like Loading...
October 4, 2017 – 9:30 am | By Paul Kuritz | Posted in Current Events, Dance, from Paul, History, Men and Women, Music, Opera, The Gospel of the Kingdom, Theater, Theology, Uncategorized | Comments Off on VIRGINIA OPERA PRESENTS RARE SAMSON AND DALILAH