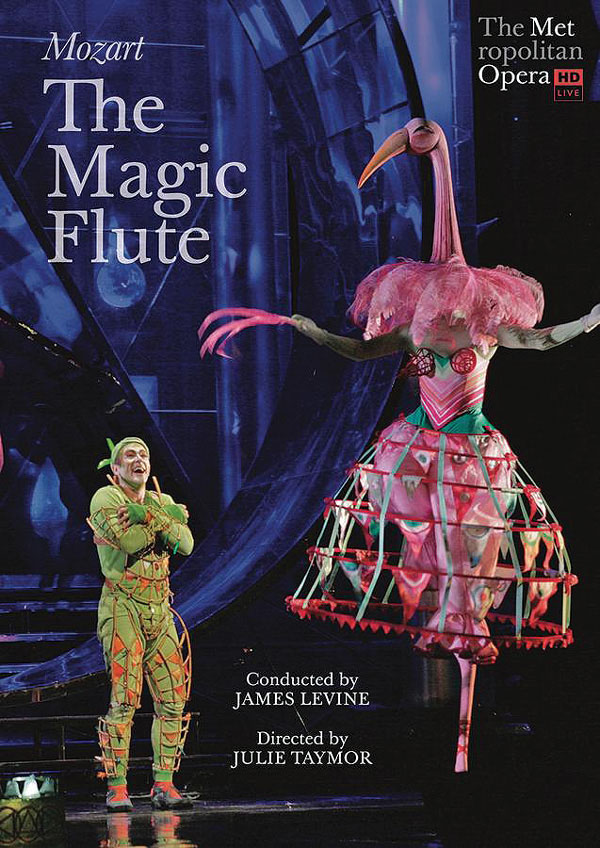 During the Civil War, President Lincoln was criticized for attending the opera so often. He replied, “I must have a change, or I will die.”

No opera that he saw was as different from everyday life, even wartime life, than Mozart’s MAGIC FLUTE.

Mozart scholar, and a former director of the Glyndebourne Festival, Myer Fredman once remarked on how oddly the plot of THE MAGIC FLUTE unfolds:

“An overture, then a dragon, three ‘cabaret’ ladies, a quasi-folk song, an intensely passionate invocation to a portrait, and a virtuoso tirade. Now follows a padlock, a magic flute, a magic glockenspiel and five singers who step out of character to talk directly to the audience.”

Nevertheless, the work, in the right hands, is pure theatrical magic.

Underneath the opera’s weirdness, the story is universal, one that appears in every culture, throughout history – the quest.

A kingdom has fallen under the shadow of a dark power. The hero-in-the-making, Tamino, at first chased by the Serpent, traverses the shadow world of the Queen of the Night, toward his desired goal, the beloved Pamina. When obtained through struggles (including the elemental ones of earth, air, fire and water), Pamina aids Tamino in overthrowing the dark power, and establishing a new world of Light within Sarastro’s temple of the Sun/Son.

“His work appears on the surface to be something very simple, but at the same time it’s very complex. That’s something that fascinates me in the work of Mozart. Secondly, the body of the work is the light that he creates, the mental light, the mental landscape, and one could say the virtual light. That’s very different from Wagner, Puccini. It’s a special light I associate with the music, with the Requiem, THE MAGIC FLUTE.”

The most recent MAGIC FLUTE we saw was Neil Armfield’s brilliant interpretation last year at the Lyric Opera of Chicago. Every production choice he made was designed to connect the audience emotionally to beloved cultural archetypes, types, and images.

Fortunately, the singing rises above the rest of the spectacle. Charles Castronovo, so memorable as Lensky in Eugene Onegin at the Lyric Opera of Chicago, deliveres a sterling vocal performance as the hero Tamino. Golda Schultz, making her Met debut, wins the hearts of everyone with a charming lyrical voice. Markus Werba’ s Papageno, more French Harlequin than the German baggy pants beerhall comic created for himself by Emanuel Schikaneder, nevertheless makes the most of his moments in the spotlight. Sarastro meets his vocal match in Rene Pape, who dominates the stage with every note he sings.

And then there is Kathryn Lewek singing the twelve minute role of The Queen of the Night.

Mozart wrote the role for Josepha Hofer, a soprano known for launching batteries of “coloratura missiles”, with a “superb top F”.[ii] Sopranos have trembled in their boots every time they have faced this Mount Everest of vocal challenges.

Not Kathryn Lewek, whose boots, ala Nancy Sinatra, walk, skip, and prance all over the piece as if on a stroll in the park.

I have read that one should say nothing if one can’t say anything good. Consequently, I have nothing to say about Ms. Taymor’s interpretation, direction or design.

When the chorus finally sings, “You have passed through the darkness”, I could only respond with, “Amen”.