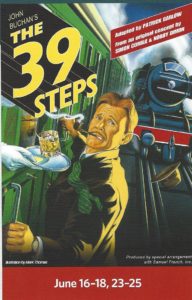 “Spoof’ was originally a late 19th century drinking game involving coins. By the late 1950s the term began to be used to describe a skit or “send-up” of a popular literary or cultural genre. By the late 1970s “spoof” had engendered a theatrical movement known as the “Theatre of the Ridiculous”, itself a send up of the critic Martin Esslin’s term “Theatre of the Absurd.”

In America, the foremost practitioner of the Ridiculous form was Charles Ludlam (1943-1987) whose Ridiculous Theatrical Company broke with naturalistic theatre conventions and employed a very broad acting style, surrealistic stage settings, costumes, and properties. The audience at the performances were directly acknowledged and often spoken to with fourth wall shattering asides. Ludlam’s Camille stands as the movement’s greatest achievement and anyone who saw it cannot forget the work’s amazing congruence of heart-breaking pathos and side-splitting comedy.

Ludlam’s Camille came to mind during a performance of the Tidewater Stage’s production of Simon Corble and Nobby Dimon’s spoof of Alfred Hitchcock’s 1935 classic film, The Thirty-Nine Steps, a film the great Orson Welles labeled a “masterpiece”

The play, adapted by Patrick Barlow, as produced by the Tidewater Stage has many of the Ridiculous’ hallmarks: four actors playing a cast of dozens; costumes and scenery designed and employed primarily for their utilitarian abilities; cross-dressing by the players; direct address of the audience; and the use of sound as a major player in the enfolding meta-theatrical event.

The production is blessed, as any spoof must be, with actors of the highest skill level. John Forkner plays the beset upon hero Richard Hannay with such panache and conviction as to almost blot from memory Robert Donat’s career-making performance. Likewise, in the great ridiculous tradition, Kate Scheid plays all the women in Hannay’s life – Annabella Schmidt, Pamela (Madeleine Carroll’s sultry screen debut), and the Crofter’s Wife, now named Margaret, originally played by the very young Peggy Ashcroft. Ms. Sheid does credit to her forbears while carving out her own fascinating take on the roles. All the rest of the roles are played, wonderfully, by the heart of the production, Ryan Clemens and Chad Rasor, mastering both difficult physical comedy with precision and countless Hitchcockian dialects with seeming ease.

Director Michael Hill-Kirkland keeps the action moving briskly and engagingly, utilizing almost every square inch of the Studio Theatre’s thrust stage arrangement. Most of the action is clearly motivated by character and plot, though occasionally the actors seem to be doing things for no better purpose than reminding the audience they are watching a comedy. (With a production this fine, they need no such reminding.) Also, the stage design by David Shuhy features a six foot revolve in the center of the thrust platform. I have never seen a turntable used in an arena/thrust production outside of Las Vegas style vocal concerts. In a stage drama the feature proves distracting, boring, and counter-productive, less effective than the tried and true creative application of the arena/thrust stage’s principles of composition, picturization, and movement. (The reliance on a turntable suggests, falsely I’m sure, that the director couldn’t’ figure out how else the audience on three sides could see an extended action!)

C.J. Hill’s costumes allow for quick identification of character, and speed of change, the two essentials for any Ridiculous spoof. Jeff Branagan’s lighting creates a variety of moods, isolates the action effectively, and directs the audience attention to the right place among the many possibilities within the theatrical space. Stephen Peppos’ sound design deserves special praise: he makes his sound a fifth actor in the unfolding story. Using special effect sounds, period orchestrations of classical film music, and popular tunes of the 1930s, the auditory effect is stunning, and it is executed with great and difficult precision by Cindy Isaac.

Virginia Beach is a beautiful city and it houses an exquisite campus which is presenting a very funny comedy, professionally done, which pays loving tribute to both Alfred Hitchcock and Charles Ludlam. If you are anywhere in the area you owe it to yourself to see The 39 Steps.